From Tales from the Fjeld, A Series of Popular Tales from the Norse of P. Ch. Asbjörnsen, A New Edition with more than a Hundred Illustrations by Moyr Smith, by Sir George Dasent, D.C.L; New York: G. P. Putnam’s Sons; (no date); pp. 17-20.


ONCE on a time there was a mill; this mill was not in these parts, it was somewhere up the country; but wherever it was, north of the Fells or south of the Fells, it was not canny. No one could grind a grain of corn in it for weeks together, when something came and haunted it. But the worst was that, besides haunting it, the trolls, or whatever they were, took to burning the mill down. Two Whitsun-eves running it had caught fire and burned to the ground.

Well, the third year, as Whitsuntide was drawing on, the man had a tailor in his house hard by the mill, who was making Sunday-clothes for the miller.

“I wonder, now,” said the man on Whitsun-eve, “whether the mill will burn down this Whitsuntide, too?”

Well, the man thought that brave, and so, as the evening drew on, he gave the tailor the keys, and showed him into the mill. It was empty, you know, for it was just new-built, and so the tailor sat down in the middle of the floor, and took out his chalk and chalked a great circle round about him, and outside 17 the ring all round he wrote the Lord’s Prayer, and when he had done that he wasn’t afraid — no, not if Old Nick himself came.

So at dead of night the door flew open with a bang, and there came in such a swarm of black cats you couldn’t count them; they were as thick as ants. They were not long before they had put a big pot on the fireplace and set light under it, and the pot began to boil and bubble, and as for the broth, it was for all the world like pitch and tar.

And he had hardly thought this before one of the cats thrust her paw under the pot and tried to upset it.

“Paws off, pussy,” said the tailor, “you’ll burn your whiskers.”

“Hark to the tailor, who says ‘Paws off, pussy,’ to me,” said the cat to the other cats, and in a trice they all ran away from the fireplace, and began to dance and jump round the circle; and then all at once the same cat stole off to the fireplace and tried to upset the pot.

“Paws off, pussy, you’ll burn your whiskers,” bawled out the tailor again, and again he scared them from the fireplace.

“Hark to the tailor, who says ‘Paws off, pussy,’ ” said the cat to the others, and again they all began to dance and jump round the circle; and then all at once they were off again to the pot, trying to upset it.

“Paws off, pussy, you’ll burn your whiskers,” screamed out the tailor the third time, and this time 19 he gave them such a fright that they tumbled head over heels on the floor, and began dancing and jumping as before.

Then they closed round the circle, and danced faster and faster: so fast at last that the tailor’s head began to turn round, and they glared at him with such big ugly eyes, as though they would swallow him up alive. 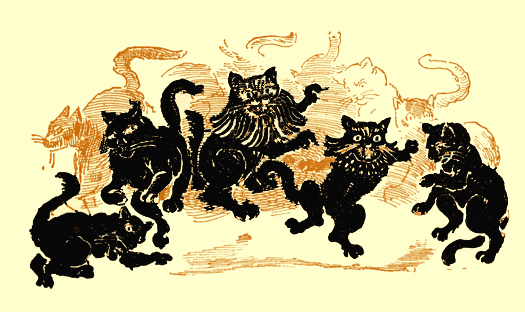 Now just as they were at the fastest, the same cat which had tried so often to upset the pot, stuck her paw inside the circle, as though she meant to claw the tailor. But as soon as the tailor saw that, he drew his knife out of the sheath and held it ready; just then the cat thrust her paw in again, and in a trice the tailor chopped it off, and then, pop! all the cats took to their heels as fast as they could, with yells and caterwauls, right out at the door.

But the tailor lay down inside his circle, and slept till the sun shone bright in upon the floor. Then 20 he rose, locked the mill, and went away to the miller’s house.

When he got there, both the miller and his wife were still abed, for you know it was Whitsunday morning.

“Good morning,” said the tailor, as he went to the bedside, and held out his hand to the miller.

“Good morning,” said the miller, who was both glad and astonished to see the tailor safe and sound, you must know.

“Good morning, mother!” said the tailor, and held out his hand to the wife.

“Good morning,” said she; but she looked so wan and worried; and as for her hand, she hid it under the quilt; but at last she stuck out the left. Then the tailor saw plainly how things stood, but what he said to the man and what was done to the wife, I never heard.