ONCE on a time there was a man who had a mill by the side of a force, and in the mill there was a brownie. Whether the man, as is the custom in most places, gave the brownie porridge and ale at Yule to bring grist to the mill, I can’t say, but I don’t think he did, for every time he turned the 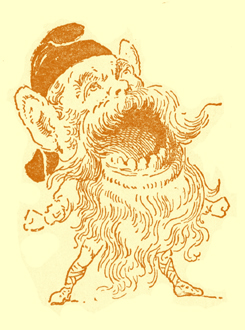 water on the mill, the brownie took hold of the spindle and stopped the mill, so that he couldn’t grind a sack.

The man knew well enough it was all the brownie’s work, and at last one evening, when he went into the mill, he took a pot full of pitch and tar, and lit a fire under it. Well! when he turned the water on the wheel, it went round awhile, but soon after it made a dead stop. So he turned, and twisted, and put his shoulder to the top of the wheel, but it was all no good. By this time the pot of pitch was boiling hot, and then he opened the trap-door which opened on to the ladder that went down into the wheel, and if he didn’t see 16 the brownie standing on the steps of the ladder with his jaws all a-gape, and he gaped so wide that his mouth filled up the whole trap-door.

“Did you ever see such a wide mouth?” said the brownie.

But the man was handy with his pitch. He caught up the pot and threw it, pitch and all, into the gaping jaws.

“Did you ever feel such hot pitch?”

Then the brownie let the wheel go, and yelled and howled frightfully. Since then he has been never known to stop the wheel in that mill, and there they grind in peace.