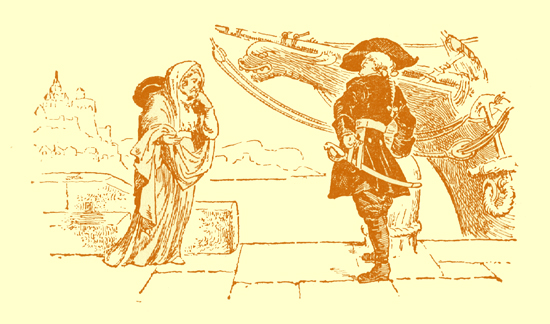 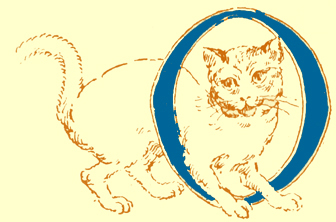 NCE on a time there was a poor woman who lived in a tumble-down hut far away in the wood. Little had she to eat, and nothing at all to burn, and so she sent a little boy she had out into the wood to gather fuel. He ran and jumped, and jumped and ran, to keep himself warm, for it was a cold grey autumn day, and every time he found a bough or a root for his billet, he had to beat his arms across his breast, for his fists were as red as the cranberries over which he walked, for very cold. So when he had got his billet of wood and was off home, he came upon 22 a clearing of stumps on the hillside, and there he saw a white crooked stone.

“Ah! you poor old stone,” said the boy; “how white and wan you are! I’ll be bound you are frozen to death;” and with that he took off his jacket and laid it on the stone. So when he got home with his billet of wood his mother asked what it all meant that he walked about in wintry weather in his shirt-sleeves. Then he told her how he had seen an old crooked stone which was all white and wan for frost, and how he had given it his jacket.

“What a fool you are!” said his mother; “do you think a stone can freeze? But even if it froze till it shook again, know this — every one is nearest to his own self. It costs quite enough to get clothes to your back, without your going and hanging them on stones in the clearings;” and as she said that, she hunted the boy out of the house to fetch his jacket.

So when he came where the stone stood, lo! it had turned itself and lifted itself up on one side from the ground. “Yes! yes! this is since you got the jacket, poor old thing,” said the boy.

But when he looked a little closer at the stone, he saw a money-box, full of bright silver, under it.

“This is stolen money, no doubt,” thought the boy; “no one puts money, come by honestly, under a stone away in the wood.”

So he took the money-box and bore it down to a tarn hard by and threw the whole hoard into the tarn; but one silver penny-piece floated on the top of the water.

So he took the silver penny and went home with it and his jacket. Then he told his mother how it had all happened, how the stone had turned itself, and how he had found a money-box full of silver money, which he had thrown into the tarn because it was stolen money, and how one silver penny had floated on the top.

“That I took” said the boy, “because it was honest.”

“You are a born fool,” said his mother, for she was very angry; “were naught else honest than what floats on water, there wouldn’t be much honesty in the world. And even though the money were stolen ten times over, still you had found it; and I tell you again what I told you before, every one is nearest to his own self. Had you only taken that money we might have lived well and happy all our days. But a ne’er-do-weel thou art, an a ne’er-do-weel thou wilt be, and now I won’t drag on any longer toiling and moiling for thee. Be of with thee into the world and earn thine own bread.

So the lad had to go out into the wide world, and he went both far and long seeking a place. But wherever he came, folk thought him too little and weak, and said they could put him to no use. At last he came to a merchant, and there he got leave to be in the kitchen and carry in wood and water for the cook. Well, after he had been there a long time, the merchant had to make a journey into foreign lands, and so he asked all his servants what he should buy and bring home for each of them. So, when all had said what they should have, the turn 24 came to the scullion too, who brought in wood and water for the cook. Then he held out his penny.

“Well, what shall I buy with this?” asked the merchant; “there won’t be much time lost over this bargain.”

That his master gave his word to do, and so he sailed away.

So when the merchant had unladed his ship and laded her again in foreign lands, and bought what he had promised his servants to buy, he came down to his ship, and was just going to shove off from the wharf. Then all at once it came into his head that the scullion had sent out a silver penny with him, that he might buy something for him.

“Must I go all the way back to the town for the sake of a silver penny? One would then have small gain in taking such a beggar into one’s house,” thought the merchant.

Just then an old wife came walking by with a bag at her back.

“What have you got in your bag, mother?” asked the merchant.

“Oh! nothing else than a cat. I can’t afford to feed it any longer, so I thought I would throw it into the sea, and make away with it,” answered the woman.

Then the merchant said to himself, “Didn’t the lad say I was to buy what I could get for his penny?” so he asked the old wife if she would take four farthings for her cat. Yes! The goody was not slow to say “done,” and so the bargain was soon struck.

Now when the merchant had sailed a bit, fearful weather fell on him, and such a storm, there was nothing for it but to drive and drive till he did not know whither he was going. At last he came to a land on which he had never set foot before, and so up he went into the town.

At the inn where he turned in, the board was laid with a rod for each man who sat at it. The merchant thought it very strange, for he couldn’t at all make out what they were to do with all these rods; but he sat him down, and thought he would watch well what the others did, and do like them. Well! as soon as the meat was set on the board, he saw well enough what the rods meant; for out swarmed mice in thousands, and each one who sat at the board had to take to his rod and flog and flap about him, and naught else could be heard than one cut of the rod harder than the one which went before it. Sometimes they whipped one another in the face, and just gave themselves time to say, “Beg pardon,” and then at it again.

“Hard work to dine in this land!” said the merchant. “But don’t folk keep cats here?”

“Cats?” they all asked, for they did not know what cats were.

So the merchant sent and fetched the cat he had bought for the scullion, and as soon as the cat got on the table, off ran the mice to their holes, and folks had never in the memory of man had such rest at their meat.

Then they begged and prayed the merchant to sell them the cat, and at last, after a long, long time, he promised to let them have it; but he would have a 26 hundred dollars for it; and that sum they gave and thanks besides.

So the merchant sailed off again; but he had scarce got good sea-room before he saw the cat sitting up at the mainmast head, and all at once again came foul weather and a storm worse than the first, and he drove and drove till he got to a country where he had never been before. The merchant went up to an inn, 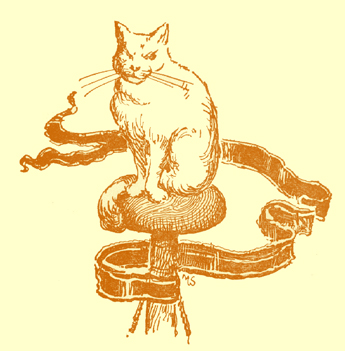 and here, too, the board was spread with rods; but they were much bigger and longer than the first. And, to tell the truth, they had need to be; for here the mice were many more, and every mouse was twice as big as those he had before seen.

So he sold the cat again, and this time he got two hundred dollars for it, and that without any haggling.

So when he had sailed away from that land and got a bit out at sea, there sat Grimalkin again at the masthead; and the bad weather began at once again, and the end of it was, he was again driven to a land where he had never been before.

He went ashore, up to the town, and turned into an inn. There, too, the board was laid with rods, but every rod was an ell and a half long, and as thick as a small broom; and the folk said that to sit at meat was the hardest trial they had, for there were thousands of 27 big ugly rats, so that it was only with sore toil and trouble one could get a morsel into one’s mouth, ’twas such hard work to keep off the rats. So the cat had to be fetched up from the ship once more, and then folks got their food in peace. Then they all begged and prayed the merchant, for heaven’s sake, to sell them his cat. For a long time he said “No;” but at last he gave his word to take three hundred dollars for it. That sum they paid down at once, and thanked him and blessed him for it into the bargain.

Now, when the merchant got out to sea, he fell a-thinking how much the lad had made out of the penny he had sent out with him.

“Yes, yes, some of the money he shall have,” said the merchant to himself, “but not all. Me it is that he has to thank for the cat I bought; and besides, every man is nearest to his own self.”

But as soon as ever the merchant thought this, such a storm and gale arose that every one thought the ship must founder. So the merchant saw there was no help for it, and he had to vow that the lad should have every penny; and no sooner had he vowed this vow, than the weather turned good, and he got a snoring breeze fair for home.

So, when he got to land, he gave the lad the six hundred dollars, and his daughter besides; for now the little scullion was just as rich as his master, the merchant, and even richer; and, after that, the lad lived all his days in mirth and jollity; and he sent for his mother, and treated her as well as or better than he treated himself; “for,” said the lad, “I don’t think that every one is nearest to his own self.”