IT is difficult to thoroughly enter into the spirit actuating the Gothic builders, so full is it of inventive originality and innate artistic merit. The work of the mediæval architect, like that of the bee, is more easy to describe than to understand. It cannot be considered unconscious, yet is not coldly thought out. The designs are never merely attempted; whatever was conceived was achieved, and we moderns must stand, like men of another race, and admire the work of our forefathers. We do not find it easy to explain how every difficulty which might — as it generally does in modern practice — make Use glaringly apparent to the utter loss of artistic effect, was by the old builders made, each as it arose, a further triumph of art. Use is retained as the main principle, but so lovingly regarded and helped out in the choice of means, that it might well seem in some cases that the use was simply an afterthought to excuse a beauty of construction. The 169 grace and grandeur of columns the Gothic has in common with the classic, but how it amplified the idea, and rung a thousand changes on it. It is alone in its use of the buttress, which in its principle and intent might be deemed hideous and temporary, but which the Gothic renders a thing of beauty and a joy for ever. The nearest church can be depended upon to charmingly demonstrate what can be made out of a widow. And what has it not been found possible to produce out of a mere gutter-spout. Behold the gargoyle!

Climate has all to do with architecture. In a moist climate the choice lay between eaves or a substitute. The Gothic — and now we speak of gargoyles we mean the first real Gothic, Early English, architecture — was against eaves, hence were required water-spouts to carry the rain well out from the walls; hence in every variety of fanciful monster we have the gargoyle, made rich with carved conceits, and helping to crust over the edifice with its share of detailed circumstance, of light and shade.

It is apparent upon sight examination of the gargoyles of almost any church that the function of the water-spout was to some extent considered 170 contemptible, for nearly all gargoyle designs are representations of fiends or monsters. The old fancy was that the ringing of bells and the hanging of evergreens in the church had the effect of driving away the demons, who were supposed to be watching opportunity to enter the sacred fane: that driven to the exterior, they found themselves fixed in stone to the roof, there to perform such useful purpose as might be, compelled as water-spouts to protect the building they would gladly destroy. 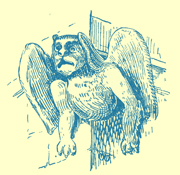 It is certainly a surprising thing that so large a portion of the ornaments of churches should be representations of the Enemy of mankind and lesser embodiments of evil. Take away the dragon forms from ecclesiology, and nearly half the ornaments would be missing. Partly symbolism, but more largely a sort of fashion, and a “cornery” adaptation to Gothic, made the dragon a common subject. We may find the dragon anywhere in the church; we are certain to find it among the gargoyles.

In ascertaining the meaning of the term gargoyle, we are met by two derivations, which, however, are reconcilable. The first is Gargouille, met as the proper name of a dragon who dwelt in the waters of the Seine, and who, ravaging the town of Rouen, was forthwith slain by St. Romanus, the bishop of that place. An explanation of this legend leads us to the true meaning of the word. Probably the banks of the Seine burst (as in early days the banks of most rivers frequently did), and the bishop had them permanently made good. Most great dangers were styled dragons in the poetic imagery of legend, and it is quite in accordance with numerous other instances to find the great flood termed the Dragon Gargouille, and to find that the term spread as a proper name. The best known of the mediæval dragons was the heresy-figure of the dragon of the Rogation processions (an adaptation of a Pagan rite), and this dragon was in Provence called Gargouille. In Poictiers he is met as Grand-guete, “great spout.” This explains the dragon form of the water-spout, though, as before suggested, fashion and a certain convenience of form had much to do with it.

The word gargoyle (gargoile, gurgoile, and gurgoyle) is simply the French word for a gutter-spout, gargouille, allied with gargouiller, to dabble; and with the English words gargle, gurgle, gullet, etc. Gar appears to be equivalent to cur (to run), and gouille is a mouth or opening; goueule is the mouth of a beast, an oven, a sack, a pitcher; goulot, the spout of a jug. The word gurgoile is, in fact, the Latin curculus, the gullet, and in tracing it through several languages, the form and meaning of the word remain practically the same. 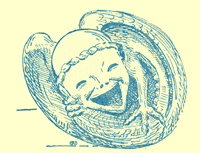 As well as gargoyles, these dragon-spouts are called Magots. Walcot derives this word from the Hebrew Magog, “on the roof,” but it is undoubtedly merely a corrupt form of imago, an image.

The dragon-form of the gargoyle being so universally adopted, prevents the ornament from possessing any wide range of subjects. “The “Devil; looking over Lincoln” is the designation of a gargoyle on 173 Lincoln Minster, and is evidence of the popular recognition of the sculptor’s success in pourtraying 1 the diabolical personage. There are, however, some notable exceptions to this portraiture. The best in existence is, perhaps, at Patrington, East Yorkshire. In this the body of the carving is a boat projecting from the parapet; at the side of the vessel, as though floating on the surface of the water, is the body of a woman, her hands tied and her hair loosely flowing. In the boat, looking over the side, and evidently barking, is a dog.

“In the boat whence the martyr has been cast
Barks a cur, type of the devilish hate
Prompting ancient murder, ancient martyrdom.”

The allusion to the death of St. Verena is obvious. This carving, like the rest of the Patrington gargoyles, unfortunately much water-worn, is a unique example.

Projecting figures of dragons, or other monsters, are often used as mere dripping points, without piercing for water passage. Though useful in that respect, their chief function is to break up continuous lines, and barren places at the angles of gables, towers, etc. These are scarcely gargoyles, though their general appearance is precisely the same. On St. Saviour’s, Southwark, 174 and on St. Mary’s, Lambeth, we see figures of this kind. The idea, widely adopted as an allowable ornament, has been followed on the towers of the Houses of Parliament. The example, here engraved, from Stony Stratford, shows this kind, while that from Westminster Abbey exemplifies the true gargouille or water-spout.

1  Pourtraying, is a real word, although seldom used these days. It is a variant spelling for portraying. — Elf.Ed.