THE period is as yet undetermined when offerings for sacred and charitable purposes began to be collected from the people whilst assembled within the walls of the church, nor is the mode by which such collections were first effected at all clear and well defined. Pope Innocent III. (1198-1216) ordered a trunk to be placed in every church, to receive alms for the remission of the sins of the donors; and Fosbroke says that poor-boxes in churches are often mentioned in the twelfth century. But these money chests were for the reception of free gifts made without personal application, and were altogether as distinct in purpose as they were in form from the collecting bags, dishes, and boxes, which in our time, and long before our time, have been handed from pew to pew for the benevolent to drop their coins into. When did these erratic ecclesiastical receptacles come into vogue is a question easier asked than replied to; and so 163 little do we really know respecting these matters, that it is best at present to simply describe the examples which may chance to come within our ken, and thus assist in accumulating facts which may ultimately lead to a full understanding of the subject.

We propose to notice a few interesting specimens of collecting boxes of wood, but none of which can lay claim to remote antiquity, nor much elegance of design.

The first we have to refer to has long been employed at Beckenham Church, Kent.

It consists of an oblong rectangular case, about half of the top of which is open, the other portion being closed and flat. The bottom of the case extends a trifle beyond the sides and one end; the opposite end spreading out into a broad pyriformed handle, decorated with a large fleur-de-lys, and having a disc at the apex perforated with a round hole to enable the utensil to be hung up when not required for use. There is little about this collecting box besides the fleur-de-lys to 164 indicate its age; but the fashion of the lily points strongly to the sixteenth century, and to this era we seem justified in assigning it.

The next collecting box to describe is certainly of equal if not of superior antiquity to the example of Beckenham, and is one of the most ornate things of the kind I have yet met with. Our illustration is from a drawing by Mr. Watling, made in 1840, at which time the curious relic was kept in the ancient parish chest at Blythborough Church, Suffolk. The utensil measures from its flat end to the extremity of its haft, fully twelve-and-a-half inches. The receptacle has rather more than a third of its top closed; and this portion as well as the sides of the case are carved in an architectural style, with circles enclosing trefoils, etc., placed between spondrels.

The Kelsale collecting box is one of the most unpretending character, being a simple rectangular receptacle with nearly half of its top closed over, and with a flat handle on a line with the bottom, terminating in a pierced disc.

Norfolk as well as Suffolk furnishes us with a few examples of old wooden collecting boxes adorned with paint. That at East Harling bears a marked resemblance to the one at Kelsale in general design; but the flat end opposite the handle rises above the top of the utensil so as to enable it to be stood firmly in an upright position. It is also worthy of mention that within the case is a sloping board, down which the money slides as it is dropped in, and effectually screens it from view. This red box has a straight haft with a handle, terminates in a trefoil, and is perforated for suspension. The whole surface of this specimen has been painted red, which is also the case with the three following examples, of which Mr. Watling has furnished me with the drawings. 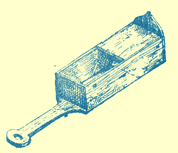 Two of these collecting boxes belong to Suffolk churches, viz., Earl Stonham and Kelsale. The 166 Stonham box, which has a rather antique aspect about it, is of the usual rectangular shape; but either end of its top is closed, so that a broad aperature is left in the middle for the admission of money. At one end on the same plane as the bottom is a flat handle, terminating in a fleur-de-lys.

It may be added that the Stonham, Kelsale, and East Harling boxes are each about eight inches in length by three-and-a-half in breadth, and therefore a trifle larger than the one at Blythborough.

The old collecting box belonging to Blickling Church, Norfolk, differs altogether in contour from those we have been considering; and if the late John Adey Repton be correct in his conjecture, is of the time of Elizabeth. It has a cordiformed body ten inches in length, secured at the broad end to a hexangular handle upwards of five inches long. The upper edge of the flat cover of the box is cut out in a double scollop to admit the money, and on it is inscribed in gilded letters on a blue field, “PRAY REMEMBER THE PORE, 92.” Mr. Repton remarks in the 167 Gentleman’s Magazine, March 1837, p. 262, that “the lower figures of the date alone remain. It was probably 1592.” A suggestion coming from so shrewd and careful an antiquarian is worthy of all respect; but the form of the box and its inscription are of a character more in keeping with the seventeenth than the sixteenth century, and I honestly believe that the utensil is of the time of Charles II., and the “92” of still later date.

The old church money-boxes were not always beautified with paint, for that still at Berrington, near Shrewsbury, is of varnished oak. It is of an oblong form, with the half of the top furthest from the straight handle left open, and thus differs in more than one respect from the example previously described. This, like the great majority of such ecclesiastical articles, is of about the middle of the seventeenth century.