THE period when the vane was invented is not known, but it is quite certain it belongs to remote times. Triton was the designation used by Vitruvius, most likely on account of its triton-like form. 1 On the stately towers of castles and other buildings of the titled and the great, vanes are usually fashioned in the shape of banners, and on churches the male of the barn-door fowl is the most popular form, and from this we get the familiar title of the vane, the weather-cock. The cock, it is believed, was first employed as a representation of vigilance to be emulated by the clergy.

In various parts of the country may be seen vanes curious in form, particulars of the more interesting of which we propose to bring under the notice of the reader. Emblems of the saints, we think, form the most fitting adornment of the church vanes, and might be more generally adopted. The vane of St. Peter’s, Cornhill, 176 London, is in the form of a golden key, in allusion to the old belief that St. Peter keeps the key of heaven.

St. Laurence was by birth a Spaniard, and at the time of his martyrdom was treasurer of the Roman Church. His bishop was killed by the soldiers of the Emperor Valerian, and because St. Laurence refused to deliver up the treasures of the church, he was laid on a gridiron and broiled to death over a fire. At the church of St. Laurence, Norwich, the vane is in the form of a gridiron with the holy martyr on its bars. The vane of St. Laurence’s Jewry, London, is in the shape of a gridiron. At Bishopstone, in Herefordshire, is a church dedicated to St. Laurence, and bearing on its spire the familiar emblem of the cruel fate of its patron saint.

The dragon on the spire of Bow Church, Cheapside, London, is perhaps the most noted of English vanes. It indicates the direction of the wind at an altitude of 221 feet 9 inches, and is the city emblem. This vane is eight feet ten inches in length, and on each wing carries an ornate 177 cross of gilt copper. Some strange stories are told respecting it. According to one of Mother Shipton’s prophecies, when the dragon of Bow Church, and the grasshopper of the Royal Exchange should meet, London streets would be deluged with blood! In 1820, both these vanes were lying together in a builder’s yard, during repairs to the respective buildings on which they are fixed, but happily the prophecy proved false. Washington Irving, in one of his pleasant passages, refers to the story, and of his seeing the vanes lying cheek by jowl. We are told when the dragon was taken down in 1820, a young Irishman got on its back and descended from the spire-point, and pushed it from the corners and scaffolds with his feet. Many thousand persons witnessed this performance, and the daring feat was much praised. 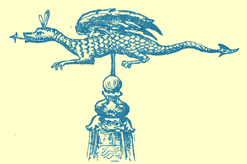 Mention has been made of the grasshopper of the Royal Exchange, and it may not be deemed out of place to give a few particulars respecting it. According to an old tradition, Sir Thomas Gresham adopted this heraldic symbol from the following circumstance. He was in a helpless and famished condition, when the sounds of a grasshopper attracted to the spot where he lay, a gentleman who rendered him help and saved his life. It has been shewn that the story is not supported by fact, for the letters of Sir Thomas Gresham’s father, which are in the Paston collection, bear the seal of a grasshopper.* A grasshopper, as a sign, was placed over Gresham’s banking-house and goldsmith’s shop, in Lombard Street. When he founded the Exchange, a large vane in the form of a grasshopper was erected, and it is said that it was saved from the Great Fire when the building was consumed. It was preserved in 1838, when the Exchange was burnt down a second time. This vane is copper gilt, and eleven feet long.

There is a vane on each of the four pinnacles of the tower of St. Sepulchre’s Church, Skinner Street, London. “Unreasonable people,” said 179 Howell, “are as hard to reconcile as the vanes of St. Sepulchre’s tower, which never looked all four upon one point of the heavens.”

At Filey, the vane takes the form of a fish. A small structure on the old bridge at Bradford-on-Avon, in bygone-times was, it is believed, a chapel, and later it was used as a lock-up. On its dome-like roof is a vane, the model of a gudgeon, the emblem of St. Nicholas. The Bradford-on-Avon folk are familiarly spoken of as “Bradford gudgeons.” Those who had been imprisoned on the bridge were said to have been “under fish and over water.” The fish was a very common symbol in early Christian art. In the catacombs at Rome, which contain our earliest Christian monuments, representations of fish are frequently figured.

Some singular ship-shaped vanes may still be seen, the best example is perhaps the one at the church of St. Thomas à Becket, Portsmouth. It is a model of an old warship, under full sail. Its dimensions are, six feet in length, and four feet two inches in height. It was erected in 1710, and since it was put up it has been regilded 180 at least three times. 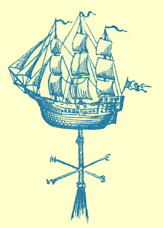 Prior to demolition, St. Mildred’s Church, in London, had a vane in the form of a ship in full sail. Another London model ship vane is at St. Michael’s, Queenhithe, and it is said the hull will hold a bushel of grain, an allusion to the former traffic of corn at the Hithe.

An arrow-shaped vane at Ludlow, has given rise to some strange stories. “The north transept of the church,” says Wright, the local historian, “is called the Fletcher’s Chancel, and on the gable is an arrow, the ensign of the craft. It is a probable conjecture that this part was appropriated for the use of the archers, who might possibly hold their meetings here.” A local legend is to the effect that the arrow was placed in its position “in commemoration of a shot made by Robin Hood from the Old Field — a long mile distant — which hit the steeple.” A vane representing a jockey racing on horseback is out of place on a church, yet one exists, the only one that has come 181 under our notice, at the church of St. Jude’s, South Exeter. 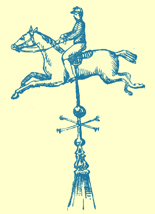 We are told in many places, in the olden time, it was not an uncommon practice to ring church bells in honour of horses winning races. In the churchwarden’s accounts of St. Edmund’s, Salisbury, is the following entry: —

The device of the House of York, the falcon enclosed in a fetterlock, may be seen in various parts of Fotheringay Church, Northamptonshire, and on the point of a flagstaff on the tower a vane formed representing the badge of the noble family.

Many years ago lived at Great Ponton, near Grantham, a poor labouring man, who increased his scanty earnings by playing his fiddle at fairs and feasts and other places. He was a most 182 careful man, saving every penny he could, after paying the bare necessities of life, to enable him to emigrate to America. After much pinching, sufficient money was obtained to pay his passage to the land of promise. Hard work and sound judgment soon enabled him to become a rich man. In the period of his prosperity, he did not forget his old home in Lincolnshire, and he was anxious to show in a worthy manner his gratitude for good fortune. He provided money for the erection of a handsome church at Great Ponton, and in doing this he made one condition, that a model, in copper of his favorite fiddle be placed on the summit of the sacred pile. There it is, a reminder of the founder’s humbler days when he made money with the musical instrument to carry him to a distant land, where he won wealth.

1  Elf.Ed.  The author misunderstands Vitruvius. He only mentions one particular weathervane, which is not a triton, meaning a trident, or three-pronged object, but a statue of the god Triton holding a rod in his hand on top of the ancient Tower of Winds, in Athens. See for yourself: Chapter VI, of On Architecture, on Bill Thayer’s site.