THE earliest mention of the use of boxes in places of worship for the reception of the offerings of the worshippers occurs in the second book of the Kings of Israel, in which we are told that “Jehoiada, the priest, took a chest, and bored a hole in the lid of it, and set it beside the altar,” from which it may be inferred that it was intended for the collection of offerings for the maintenance of the temple. The provision of similar boxes probably became usual in churches at an early period in the history of the Christian Church, the giving of alms for the poor being so ancient a practice that it would soon become convenient to have a receptacle for them. Two of the oldest examples in English churches were set up at least as early as the middle of the fourteenth century in the little church on Holy Island. They were called St. Columba’s box and St. Cuthbert’s box, and there are several entries relating to them in the records 155 preserved in the library of the Dean and Chapter of Durham. Many of the alms-boxes still in existence are probably nearly as old, and many entries concerning them may be found in the churchwardens’ accounts of a number of old parishes. They are, in most cases, made of oak, and are generally furnished with ornamental hinges and locks.

In the ancient abbey church at Hexham, there was for centuries an oaken alms-box, with two locks, and decorated with brass fleurs-de-lys. Some years ago it was removed from the pillar to which it had till then been attached, and placed in the vestry. Another good example may still be seen in the church of St. Peter-in-the-East, Oxford. It is raised on a carved pedestal fixed against the side of a pew, and is chiefly remarkable for the beauty of the iron-work with which it is decorated. There is an oak alms-box in Meare Church, Somersetshire, raised on a square shaft, ornamented with twisted columns and cusped panels.

One of more elaborate design may be seen in Outwell Church, Norfolk. The 156 box, which is raised on a handsomely-carved stem, has slits for money to be dropped through in lions’ heads, carved on the four sides, the corners of which are surmounted by carved knobs, a larger one rising from the centre of the lid.

In St. George’s Chapel, Windsor, is an alms-box of the Tudor period, of an octagonal form, raised on four slender supports, and having the royal initial H on each panel.

A large proportion of these old alms-boxes bear inscriptions; “Remember the poor” being one very frequently met with by those who, like the writer, never pass a country church without entering it, provided the doors are not locked. The box in the pretty little church at Bramford, in Suffolk, has, under the date 1591: —

“Remember the poor: the Scripture doth record
What to them is given is lent unto the Lord.”

The ordinary simple exhortation to remember the poor is inscribed on the box in the ancient parish church of Alnwick; on that, dated 1637, attached 157 to one of the seats in the nave of the church of North Mims, Hertfordshire; and on the carved oak box in Billingham Church, in the county of Durham, against a pillar in the south aisle, with the date 1673.

There was a curious custom connected with the triple-locked box in the church of St. Beuno, in North Wales. It was formerly used as the depository of the money acquired by the sale of such of the calves and lambs of the farmer of the parish as were born with a peculiar mark upon their ears, locally known as “St. Beuno’s mark,” in virtue of which they were claimed by the churchwardens for the church. As there were three locks, it seems probably that the priest and the churchwardens each held a key.

Some interesting references to alms and alms-boxes may be found in old account-books of churchwardens and other ancient records. In the accounts of the parish of Cheddar, in Somersetshire, there are entries under date 1666 as follows: — “P’d for a Latten box to collect money in, 8d.,” and, “P’d ye Apparitor for bringinge notice of ye money collected for London, 6d.,” from which it has been surmised that the churchwardens had a new box made on account of the offerings expected to be given for the relief of the sufferers by the great fire by which the City of London was in that year laid in ruins. In the records of Tyningham, under the date 1644, there is an entry stating that George Hay sent seven shillings for the poor’s box, because he had not been able to attend on the Sunday, when his wife was buried, on account of the shortness of the days, and because “the pepill did not conveine so tymeouslie as he expectit.”

Though the custom of collecting alms from the congregation is even more ancient than the provision of boxes to receive them, very few examples of the dishes used for that purpose in old times are now in existence, probably owing to the facility with which those made of metal could 159 be melted and replaced by new ones when they became damaged or old-fashioned. Some still remain, however, and entries relating to others may be found in old inventories. Some are silver, more plated, and others of brass or pewter. They vary in shape, the majority being round, while others are oval, and a few examples are square. Many bear inscriptions, a very common one being, “It is more blessed to give than to receive.” Another frequently met with merely records the name of the donor, as in the example at Stockton-on-Tees, on which is engraved, “The gift of Catherine Jackson, 1744.” In the church of Castle Eden, in the county of Durham, a saucer-shaped dish has the donor’s name, preceded by a quotation, thus: “To do good and to distribute forget not, for with such sacrifices God is pleased. The gift of R. Burdon Junr. to the Parochial Chappell of St. James at Castle Eden, Anno 1765.” A longer quotation appears on an alms-dish in St. Oswald’s Church, Durham, the inscription being: — “The gift of John Sedgwicke Esqr., A.D. 1699. If thou hast much give plenteously. If thou hast little, do thy diligence gladly to give of that little. To do good and to communicate forget not, for with such sacrifices 160 God is pleased. Give to the Poor, and Thou shalt have Treasure in Heaven. Let him that is taught in the word communicate to him that teaches in all good things. If there be first a willing mind, it is accepted according to that a man hath, and not according to that he hath not.” A pewter plate in Grindon Church bears the inscription: “Bought for ye use of Grindon Church, 1724, R. C. and J. R. Chuh. W.,” the initials probably being those of the churchwardens of that year. In Eglingham Church there is an alms-dish inscribed: “Given to the Church of Eglingham. Lancet Allgood Esqr. and Mrs. Sarah Ogle of Eglingham, 1751.” Sunderland Parish Church possesses a silver dish with the equally simple inscription: “The gift of Jane Gibson to Sunderland Church, Ao. 1726.”

There are two curious examples which, from their comparatively small size, may be supposed to have been used for collecting the offerings of the congregation, while the fact of their being furnished 161 with locks has caused them to be regarded by some as alms-boxes. One of these belongs to the hospital of St. Nicholas, at Harbledown, the pleasant eminence from which the traveller through Kent by road looks down upon the ancient city of Canterbury. 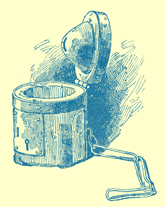 The other was formerly kept in a chest in the church of Neen Solars, in Shropshire, but has been allowed to pass into private ownership. 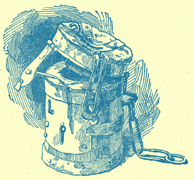 The two examples are very similar, both being of oak, cylindrical in shape, and rather clumsily strengthened by iron bands. They are only about four inches in diameter, and appear to have been made by hollowing out the wood. The Neen Solars example, in addition to a lock with hasp, was secured by two padlocks. Both this and the Harbledown example have chains attached to them, but whether for the purpose of securing them to a wall, or of suspending them from the girdle of the collector, is unknown.