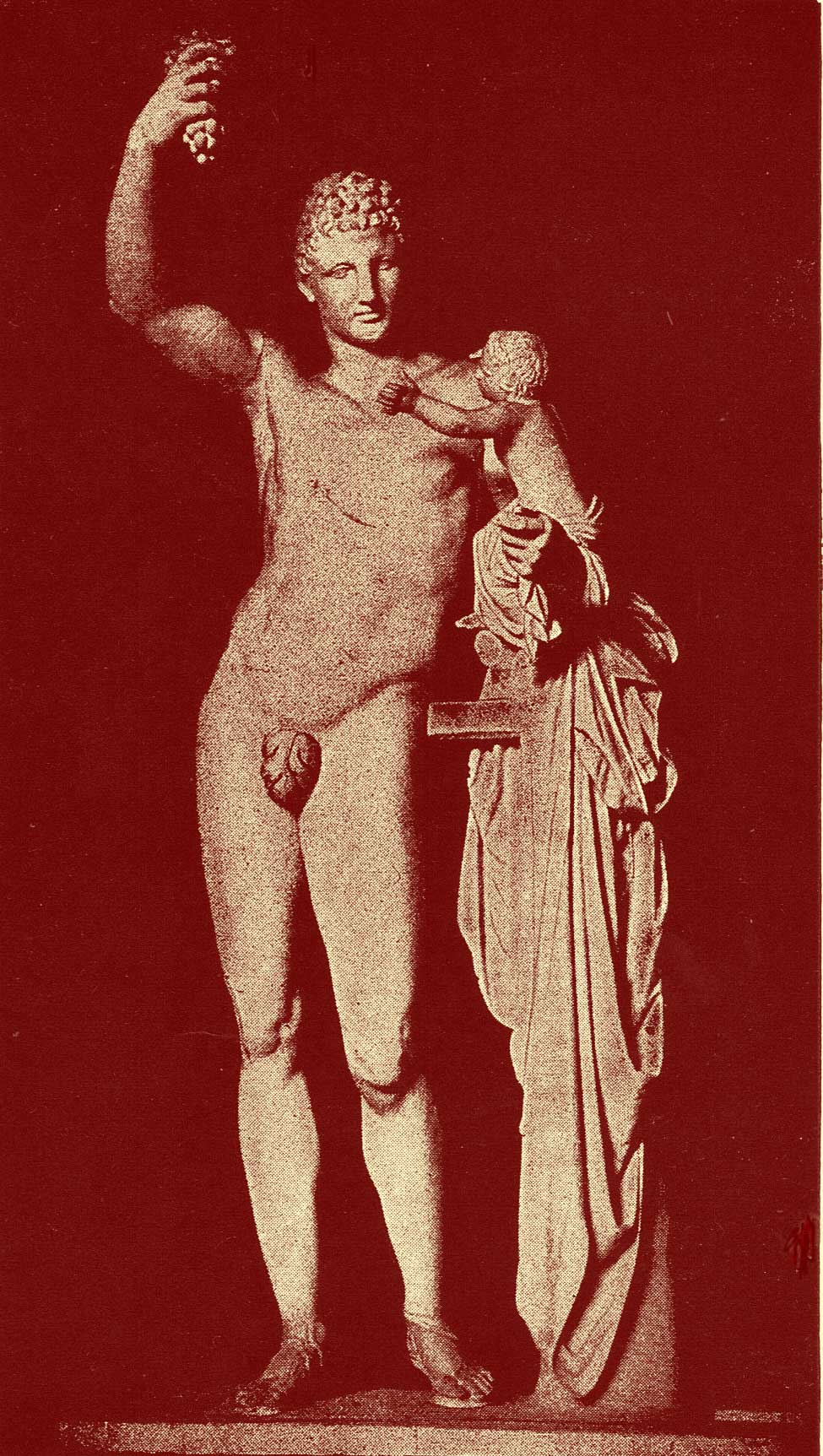 HERMES OF PRAXITELES.
(Found at Olympia, 1877. Restored by Schaper.)


A son of Zeus and Maia, a daughter of Atlas, was regarded in the first instance as the special deity to whom was due the prolificness and welfare of the animal kingdom. In consequence, however, of the fact that in early times the chief source of wealth consisted in herds of cattle, the prolificness of which was traced to him, it came to pass that he was considered generally to be the first cause of all wealth, come whence it might. But as civilization advanced, and it became known by experience that there was no means of acquiring wealth so rapidly as by trade, his province was extended to trade, and the protection of traders. Again, since the main condition of prosperity in trade was pace, and undisturbed commerce by land and sea, he came to be viewed as a guardian of commerce. And, further, assuming that all who took part in trade were qualified to look after their own interests, 151 shrewd and prudent, the function of protecting prudence, shrewdness, and even cunning, was assigned to him. In certain aspects of trade, if not in the best, it was reckoned a great point to talk over and cajole purchasers, and from his protection of this method of doing business, Hermes (Mercury) came to be god of “persuasive speech” or oratory. Finally, it being only a short step from this to cunning and roguery, we must not be surprised to find him described as protector of thieves and rascals, though no doubt this task was assigned him more in joke than in earnest. 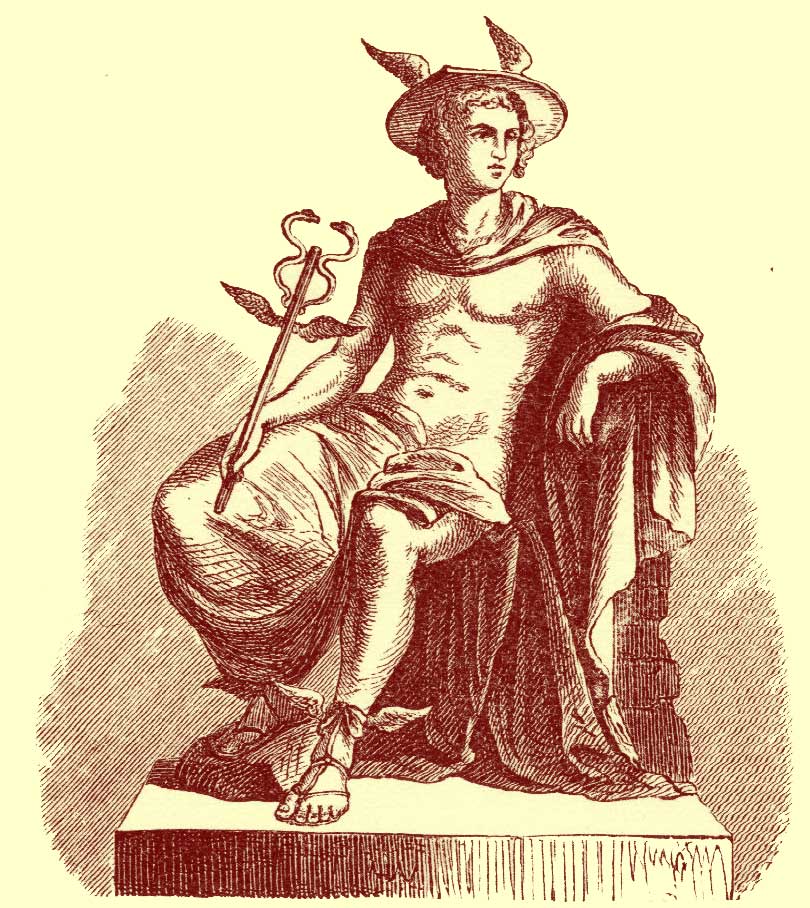 His office of messenger and herald of the gods, in particular of usZeus, appears to have originated partly in the duty assigned to him of protecting commerce, the success of which depends largely on the messengers and envoys employed 152 in it, and partly in other functions of his which would lead us too far to explain.

“Foot-feather’d Mercury appear’d sublime
Beyond the tall tree-tops; and in less time
Than shoots the slanted hail-storm, down he dropt
Towards the ground; but rested not, nor stopt
One moment from his home; only the sward
He with his wand light touch’d, and heavenward
Swifter than sight was gone.”

As messenger and envoy of Zeus, Hermes conducts the intercourse between heaven and earth, announcing the will of the gods to men, and form this office was further derived his character of a god of oracles. In the capacity of messenger or the title of Psychopompus, he guided the souls of the departed, crossing in Charon’s barkbark, and placing them before the throne of the deities below. From the shadow world of spirits to that of sleep and dreams is a short step for the imagination, and accordingly we find Herms described as Oneiropompus, guide of dreams. As the swift messenger of the gods he readily came to be looked on as a model for the youth practising in the palæstra, in which capacity he had the title of Enagonius.

In proportion to the variety of task whish he had to perform was the variety of mythical stories about his actions and life, some of them taking us back to the very day of his birth. for it was not uncommon practice in the early myth-making age to ascribed to the infancy of a god some instance of the peculiar qualities by which he was afterwards distinguished. So it happened with Hermes.

His birth having taken place on the fourth of the month, that day became sacred to him. Born, as it was believed, during the darkness of night, in an unfrequented, lonesome 153 cave on Mount Cyllene, in Arcadia, and on this account styled Cyllenius, he was only a day old when a remarkable example of his cunning and knavery occurred. Slipping out f the couch in the cave where he was left to sleep as was supposed, the night being dark and cloudy, he found a herd of cattle balonging to his brother us (as sun-god), and stole a number of them. When the morning came Apollo searched in vain for th missing cattle; for the infant god had cleverly succeeded in obliterating all traces of them by fastening bunches of broom to their hoofs, and in this condition driving them backwards into a cave at Pylos, so as to produce the impression that they had left instead of entered the cave. After this adventure he slunk back to his couch, and feigned to be asleep. He had, however, been observed by a rustic named Battus,who informed against him, whereupon Apollo, angry at such a daring piece of robbery, dragged him out of his couch, and took him off to the throne of Zeus to be punished and made an example of. But us was irrepressible, took up a lyre which he had made the day before out of the shell of a tortoise, and proceeded to play on it, to the amusement and delight of both Zeus and Apollo, and further ingratiated himself with his brother by giving him the lyre, inventing for his own use a shepherd’s pipe. The cattle of the sun-god 154 were the clouds, and Hermes was a god who presided over the fertility of nature. The signification of the story of his stealing some of these cattle on a dark night would therefore seem to be simply that of clouds discharging fertilizing showers by night.

The two brothers having thus made their peace, continued from that time forward on the best of terms, Apollo attesting his good disposition towards Hermes by giving him in return for the lyre a present of a golden divining -rod, and also the power of prophecy. This condition, however, was attached to the gift, that he was not to communicate his revelations of the future by words as did Apollo, but by sings and occurrences. That is to say, that persons revolving some undertaking in their minds were to be guided by certain unexpected sights, accidents, or incidents, and were to recognize in them the favor or displeasure of the gods with reference to the enterprise in question, — a method of proceeding common enough in modern superstition. These signs and incidents were believed to be sent by Hermes, whose counsel in other cases of doubt, as to whether to do or not to do a think, was sought for by recourse to dice, the belief being that a high throw signified his approval, and a low throw the reverse.

The cunning and adroitness, the same good humor and ready answer which he gave proof of in the first days of his infancy, were often afterwards and with like success displayed by him — as, for example, when he stole the sceptre of Zeus, Aphrodite’s [Venus’] 155 girdle, Poseidon’s [Neptune’s] trident, the sword of Ares [Mars], the tongs of Hephæstus [Vulcan], or Apollo’s bow and arrows, in each case managing to make up matters, and smooth away the indignation of his victims. But the most celebrated instance in which his brilliant talents were fully displayed was the affair of Argus with the hundred eyes, whom Hera [Juno] had appointed to watch over Io, one of the favorites of Zeus, whom the latter, that she might escape the vengeance 155 of the jealous Hera, had transformed into a cow — a trick which the goddess had perceived.

Hermes was commanded by Zeus to release Io from the surveillance of Argus, and in doing so to use no force. He found the task no easy matter, seeing that the watchman had a hundred eyes, of which, when in the deepest sleep, only fifty were closed. Hermes succeeded, however, and in the following way. Presenting himself to Argus, he commenced to amuse him by telling all kinds of tales, and having in this way fairly gained the shepherd’s confidence, he next produced a shepherd’s pipe, and played it various tunes of such sweetness that they gradually lulled Argus into so deep asleep that one by one all his hundred eyes closed. The moment that last eyelid drooped Hermes slew him, and at once released Io, and led her away. For this service he rose high in the estimation of Zeus, and from that time the name of “Argus-slayer,” Argeiphontes, was the proudest title which he bore. As a memorial of Argos, Hera, it was said, set his eyes in the tail of her favorite bird, the peacock. But these and such-like instances of his knavery and cunning do not by any means express the whole character of Hermes; for his skill was also directed frequently to purposes of useful invention. It was he, for example, who invented Apollo’s lyre, as well as that one by which the Theban musician, Amphion, did such wonders; and it was he who taught Palamēdēs to express words in writing. And, besides, wherever danger that required skill and dexterity as much as courage presented itself, he was always present to assist. He acted as guide to heroes in their dangerous enterprises, and in that capacity frequently, as in the case of Heracles [Hercules], was associated with Athene. To travellers who had lost their way he was a ready guide, and to exiles a constant and willing helper in strange lands and among ill-disposed people.

In the primitive form of his worship Hermes was, as has 156 been said, the god who gives prolificness to flocks and herds. In this character we find him in what appears to have been the oldest centre of his worship in Greece, that is in Samothrace and the neighboring islands of Imbros and Lemnos, where he bore the title of Cadmilus or Casmilus. His usual title among herdsmen was eitehr Nomius or Epimelius.

A messenger himself, it became his office to aid human messengers and travellers, and to this end it was he who inspired the idea of erecting sign-posts at cross-roads with directions as to whither each road led. These sign-posts took the form of statues, if they may be so called, consisting f a pillar running narrower towards the foot, and surmounted by a head of Hermes, and called Hermæ. It was the duty of travellers on passing one of them to place a stone beside it — a custom which not only largely helped towards clearing the fields of stones but also led to improvement in the roads themselves, and hence to increased facilities for commerce. If more than two roads crossed, a corresponding number of heads were placed on the pillar, one facing each way. Similar figures were also found outside houses in Athens for the purpose of cheering parting travellers. 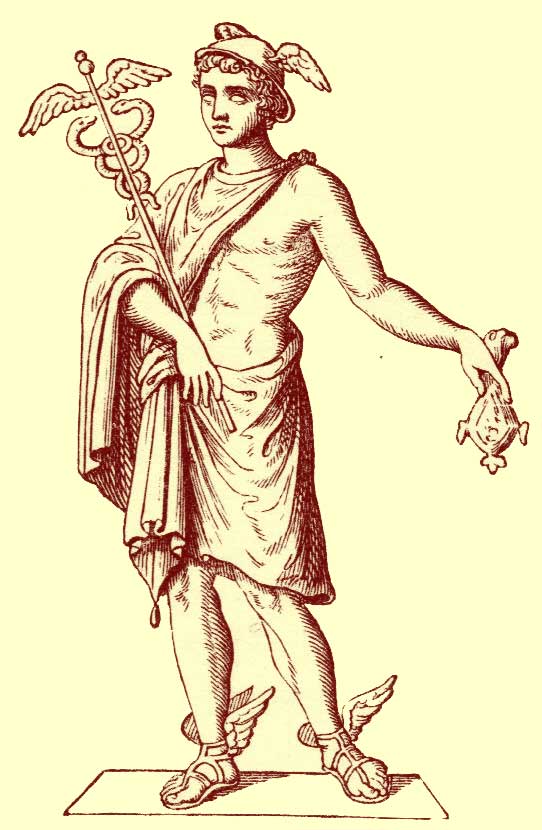 The attributes of Hermes were the caduceus r kerykion, that is, a short staff with a pair of wings and a knotted snake attached to it, and the petasus or winged cap. Beside him sometimes is a cock or a goat. For sacrifice he deighted in the tongues of animals, a suitable sacrifice to the god of oratory.

The Roman Mercurius appears to have possessed in common with Hermes only the character of god of trade and oratory. Roman traders held a festival to him on the 25th of May.

In the earlier works of art Hermes appears bearded and about middle age, frequently carrying a sheep or a kid over his shoulders. His form is 157 athletic. In more recent works we find him of a youthful figure, such as became his office as messenger of the gods. He wears the petasus, and sometimes wings at his heels, carries the caduceus, and sometimes, as god of trade, a purse. Among the incidents of his life, one which occurs frequently on the painted vases is that in which he appears presenting the three goddess to us, who had to decide their claims as to which of them was the most beautiful. Sometimes he is represented in sculptures as a mere boy. Many of the Hermæ described above have come down to our times.