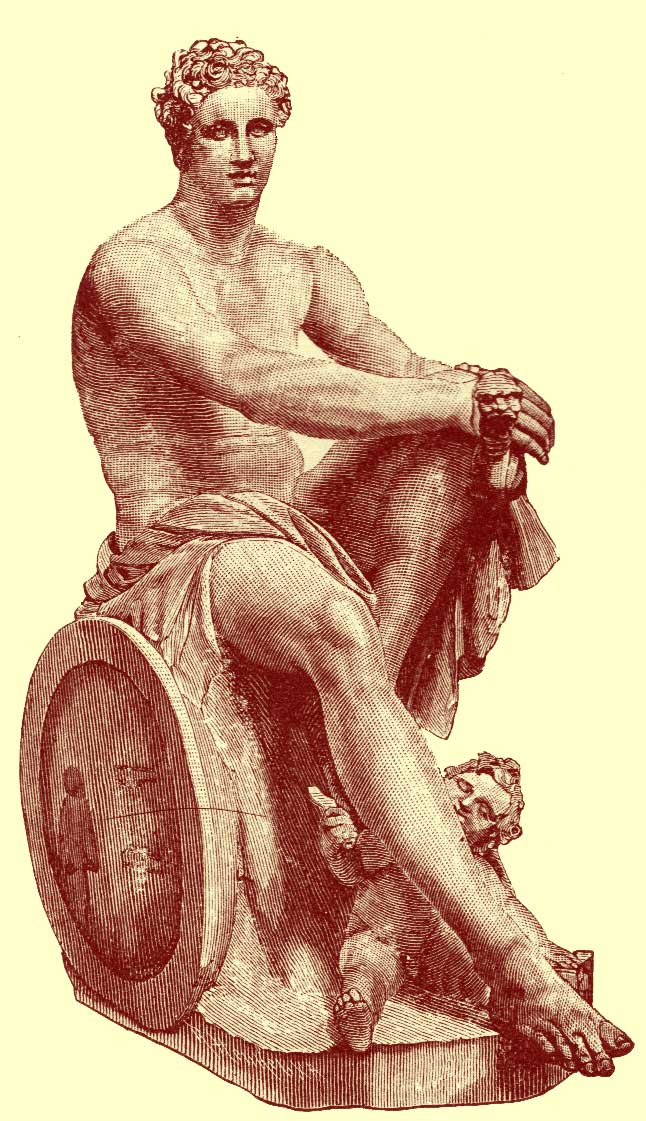 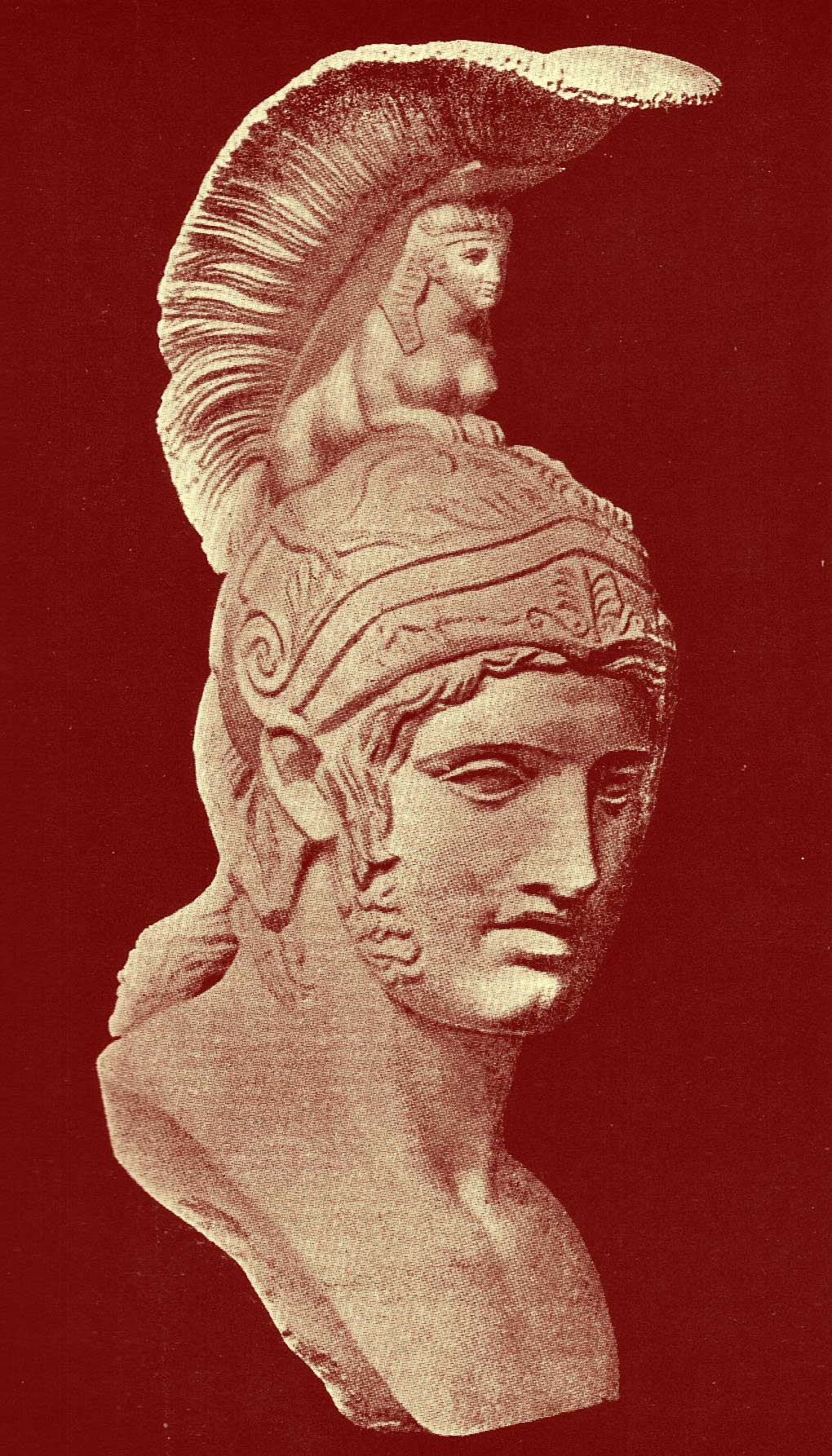 A son of Zeus and Hera (Juno), according to the belief of the Greeks, was originally god of the storm and tempest, and more particularly of the hurricane; but this his natural meaning was lost sight of at an earlier period and more completely than in the case of most of the other gods, the character in which he appears to us being exclusively that of “god of the turmoil and storms in human affairs,” or more correctly, “of the wild confusion and strife of battle.” Of all the higher gods he was the most fierce and terrible, taking pleasure in slaughter and massacre.

In this respect he forms a striking contrast to Pallas Athene, the goddess of well-matched chivalrous fights, whom we often find opposed to him in mythical narratives. When fighting she was invulnerable, and always on the side of the victor; while Ares, being not only god of battle but also a personification of war, with its double issue of victory and defeat, was 97 sometimes wounded, and even taken prisoner. When assisting the Trojans in their war with the Greeks, in the course of which he took under his special protection their leader, Hectorm, e was wounded by the Greek hero Diomedes, aided by the goddess Athene. He fell — so Homer describes the event in the Iliad (v. 853) — with a thundering crash to the ground, like the noise of nine or ten thousand warriors engaged in battle. Again (Iliad xxi. 400) he was wounded by Athene and fell, his armor clanking, and his body covering with his fall seven acres of ground, — an obvious reference to the roar and destruction attending a great storm. He was once captured by Otus and Ephialtes, the giant sons of Alœus the planter, and kept imprisoned in a great bronze vase (Iliad v. 385) for thirteen months — a space of time which, when we remember that the names of the two heroes are derived from husbandry, seems to indicate a full year of peaceful agriculture. Like himself, his offspring were distinguished for their prowess or delight in strife; as, for example, Meleager, the prince of Calydon, who speared the Calydonian boar (see below); Cycnus, whom Heracles slew, and for this would have been avenged by Ares had not Zeus stopped the conflict of his two powerful sons by a flash of lightning; then Parthenopæus, one of the seven leaders in the assault on the town of Thebes (see below); Œnomæus, and others. The expression, “a son or offshoot of Ares (Mars),” frequently applied to other heroes, must not be understood literally, but merely as indicating physical strength and valor equal to that of his actual descendants.

Eris, the personification of fatal strife, was usually by his side, us and us ( us and us) attended on his steps. On the other hand we find him, even in the Iliad (v. 355 and xxi. 416), where his general character is that of a huge fierce combatant, associated with Aphrodite, the goddess of love. In the Odyssey (viii. 266) the story is told of his 98 secret visit to her, when he was detected by Helios (the sun) who having informed Hephaæstus (Vulcan) of the fact, the alter devised a cunning net, and catching the two together under it exhibited them to the gods of Olympus, calling upon Zeus [Jupiter]) to bring them to trial. This relation of Ares (Mars) to Aphrodite (Venus), who was even worshiped as his proper wife in Thebes, indicates very probably the peace and rest that follow the turmoil of war. 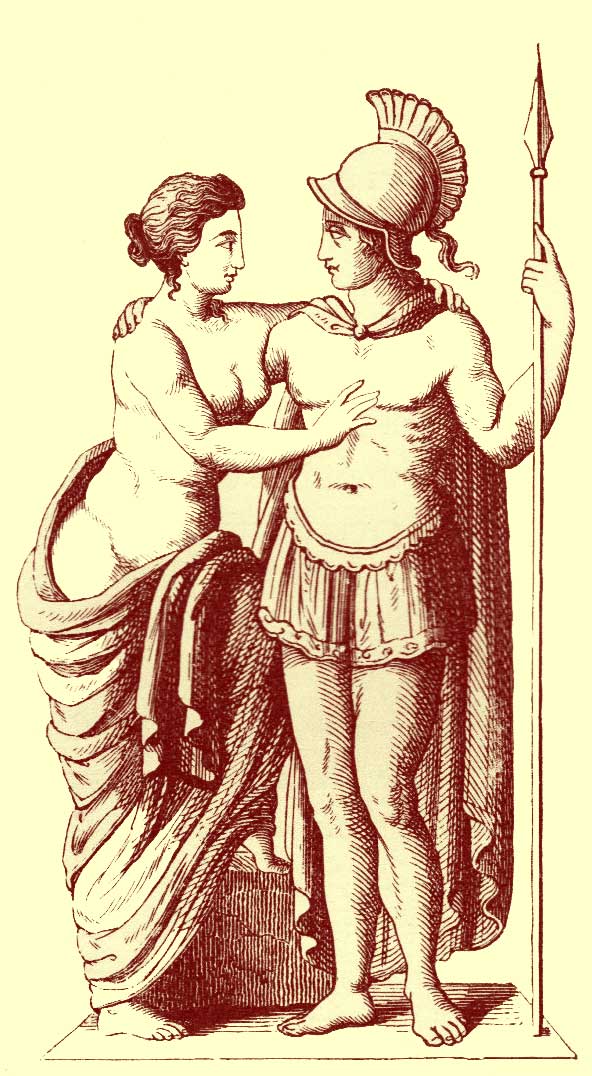 It is true that Ares was worshipped in Greece, but not as a great protecting deity, such as he was deemed by the Romans. In Athens the Areopagus, or “Mars’ Hill,” on which was held a court of justice for the decision of cases involving life and death, derived its name from him, the story being that he had once appeared before it in a cause against Poseidon. The warlike people of Tegea, the Spartans, who had a very ancient temple in his honor; the Athenians, for whom Alcamenes the sculptor, a contemporary and rival of Pheidias, made a statue of him, and the Eleans, all worshipped him with more or less zeal. But the real home and centre of his worship was Thrace, with its wild, warlike population and its stormy tempestuous sky. It 99 was in Rome, however, with its conquests and pride of military power, that he enjoyed under the name of Mars the highest honor, ranking next to Jupiter as guardian of the state. The Romans considered themselves to be actual descendants of Mars, on the ground of his having been, as was believed, the father of Romulus and Remus, styling him Marspiter that is, Mars Pater, their father Mars. At the town of Reate in Italy he had an oracle, while in Rome there was consecrated to him the “Field of Mars” (Campus Martius), a large space where military exercises and manœuvres took place, athletic competitions, called “martial games,” were held, and public assemblies were summoned to consider important questions of the state. The race-course and the temple of the god were there; and there every four years were held the census and muster of citizens liable to be called into the field in the event of war. On this occasion a sacrifice was presented to him, consisting of a bull, a ram, and a goat, which, before being slain, were led three times round the assembled crowd, while during the ceremony a prayer was offered up that the immortal gods might still enlarge and ennoble the Roman empire more and more, or as it was expressed in later times, that they might give stability and endurance of the Roman state. Chariot-races were held there twice a year, at the beginning of March and in October; the ceremony of sacrificing to Mars the off-horse of the biga that won the race — the October horse as it was called — was performed at the latter. In the “Field of Mars” was dedicated the booty brought back from campaigns, and no Roman general went to war without first proceeding to the temple of Marspiter, to swing the sacred shield and spear, adding the words, “Watch over us, O Mars!” This shield (ancile) was believed to have fallen from heaven at the time when Numa Pompilius was king of Rome, and like the palladium in the temple of Vesta [Hestia], was looked on with veneration. 100 Both it and a sacred spear were preserved in the temple of Mars, under the custody of priests who were called Salii, and whose duty it was every year to celebrate a festival of thanksgiving for this important present from the gods. In the earliest times the sacrifices offered to Mars consisted of human beings, particularly those who had been taken prisoners in battle; but in later times this custom was abandoned, and horses, rams, dogs, and a portion of the booty captured from enemies were offered instead. Besides these animals, the wolf, cock, and woodpecker were sacred to him.

The attributes of Ares were a spear and a burning torch, such as, according to ancient custom, his priests carried when they advanced to give the sign of battle to opposing armies. The animals chosen as his symbols were the dog and the vulture, the constant visitants of battle-fields.

In works of art Ares is represented generally as of a youthful but very powerful build, armed with helmet, shield, and spear. At other times he is bearded and heavily armed. A favorite subject was his meeting with Aphrodite, as in Fig. 17.