Father Bruin in the Corner

NCE on a time there was a man who lived far, far away in a wood. He had many, many goats and sheep, but never a one could he keep for fear of Greylegs, the wolf.

At last he said, “I’ll soon trap Greyboots,” and so he set to work digging a pitfall. When he had dug it deep enough, he put a pole down in the midst of the pit, and on the top of the pole he set a board, and on the board he put a little dog. Over the pit itself he spread boughs and branches and leaves, and other rubbish, and a-top of all he strewed snow, so that Greylegs might not see there was a pit underneath.

So when it got on in the night, the little dog grew weary of sitting there: “Bow-wow, bow-wow,” it said, and bayed at the moon. Just then up came a fox, slouching and sneaking, and thought here was a fine time for marketing, and with that gave a jump — head over heels down into the pitfall.

And when it got a little farther on in the night, the 62 little dog got so weary and so hungry, and it fell to yelping and howling: “Bow-wow, bow-wow,” it cried out. Just at that very moment up came Greylegs, trotting and trotting. He too thought he should get a fat steak, and he too made a spring — head over heels down into the pitfall.

When it was getting on towards grey dawn in the 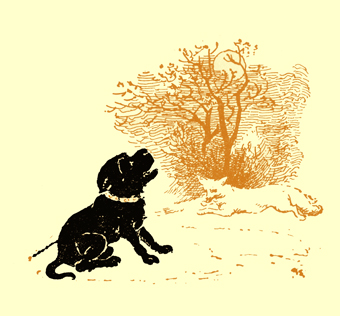 morning, down fell snow, with a north wind, and it grew so cold that the little dog stood and froze, and shivered and shook; it was so weary and hungry, “Bow-wow, bow-wow, bow-wow,” it called out, and barked and yelped and howled. Then up came a bear, tramping and tramping along, and thought to himself how he could get a morsel for breakfast at the very top of the morning, and so he thought and thought among the boughs and branches till he too went bump — head over heels down into the pitfall.

So when it got a little farther on in the morning, an old beggar wife came walking by, who toddled from farm to farm with a bag on her back. When she set eyes on the little dog that stood there and howled, she couldn’t help going near to look and see if any wild beasts had fallen into the pit during the night. So she crawled up on her knees and peeped down into it.

“Art thou come into the pit at last, Reynard?” she said to the fox, for he was the first she saw; “a very good place, too, for such a hen-roost robber as thou: and thou, too, Greypaw,” she said to the wolf; “many a goat and sheep hast thou torn and rent, and now thou shalt be plagued and punished to death. Bless my heart! Thou, too, Bruin! art thou, too, sitting in this room, thou mare-flayer? Thee, too, will we strip, and thee shall we flay, and thy skull shall be nailed up on the wall.” All this the old lass 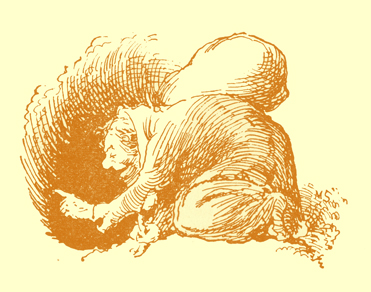 screeched out as she bent over towards the bear. But just then her bag fell over her ears, and dragged her down, and slap! down went the old crone — head over heels into the pitfall.

So there they all four sat and glared at one another, each in a corner — the fox in one, Greylegs in another, Bruin in a third, and the old crone in a fourth.

But as soon as it was broad daylight, Reynard began to peep and peer, and to twist and turn about, for he thought he might as well try to get out.

But the old lass cried out, “Canst thou not sit still, thou whirligig thief, and not go twisting and turning? Only look at father Bruin himself in the corner, how he sits as grave as a judge,” for now she thought she might as well make friends with the bear. But just 64 then up came the man who owned the pitfall. First he drew up the old wife, and after that he slew all the beasts, and neither spared Father Bruin himself in the corner, nor Greylegs, nor Reynard the whirligig thief. That night, at least, he thought he had made a good haul.