IN the early days of the Christian era, when persecution flourished and martyrdoms were of common occurrence, the worship of God was carried on in the Catacombs or Crypts, in which the dead had been hidden away and laid to rest. After the persecution ceased, the Christians built their churches on spots rendered sacred as the burial-places of holy persons, and as time wore on, it became the rule to construct mortuary chambers or Crypts, for the reception of the relics of saints and martyrs, beneath the high altar. The floor of the choir was generally raised higher than that of the nave, and the sides were then left open so that the worshippers could, from the choir aisles, observe the shrine beneath. The most usual method, however, was for pilgrims to descend into the vault in small bands to perform their devotions.

The use of Crypts for the purpose indicated lapsed considerably after the thirteenth century, 45 but many of them happily still remain intact, notwithstanding the fact that entirely new edifices have, in some instances, been built above them.

Crypts exist in nearly every county of England, therefore it will be only necessary to mention here a few of the principal examples in order that a general idea may be gained concerning their structure. The earliest specimens date from the Saxon era, and several of these have been discovered in comparatively recent times.

One of the most famous Crypts is to be seen at Hexham, Northumberland. After having been lost to sight for centuries it was discovered in the year 1725. The entrance is close to the south-west pier of the tower, and access is gained by means of a ladder. The central chamber or chapel is thirteen feet four inches long by eight feet wide. It is flanked by a passage on the north, south, and west sides, from which entrance is gained on the south and west sides only. The height of the Crypt varies from eight feet to nine feet, and the doorways are a little over six feet in height. There are several recesses in the walls, which may have been used for holding lamps. The vaulting is either semi-circular or triangular throughout.

A similar Crypt to the foregoing exists beneath the Cathedral at Ripon. Entrance is gained by a narrow passage leading from the south-east bay of the nave. The central cell is eleven feet three inches long by seven feet nine inches wide, and nine feet four inches high. It is surrounded by passages on three sides, and one of the entrances therefrom is extremely small, being thirteen inches wide and eighteen inches high, and splayed outwardly. This opening goes by the name of “S. Wilfrid’s needle,” and tradition says it is lucky for anyone to pass through it. Whatever may have been its original use, it is now made to play a prominent part as a showplace for the delectation of curious visitors to the Cathedral.

At Lastingham Church, Yorkshire, is to be found another good specimen of a Saxon Crypt. By many people this is considered the finest in the country. Its dimensions are about forty feet in length by twenty-four in width. It really forms an underground church, and is almost the same size as the structure above it. Massive low piers, the capitals of which are richly carved, support the vaulted roof. It is lighted by several small circular-headed windows, and at the east 47 end stands a rude stone altar. The arches which support the roof are circular in shape with flat ribs.* “From the east end . . . . . the scene is interesting to astonishment. Here you perceive the massy arches ranged in perspective; you behold the huge cylindrical pillars and their sculptured capitals, each one differing from the other, but all in the real Saxon style; to this add the groined roof, and the stairs at the west end leading up to the church, enveloped in a luminous obscurity from the scanty light admitted by the window in the east.”† 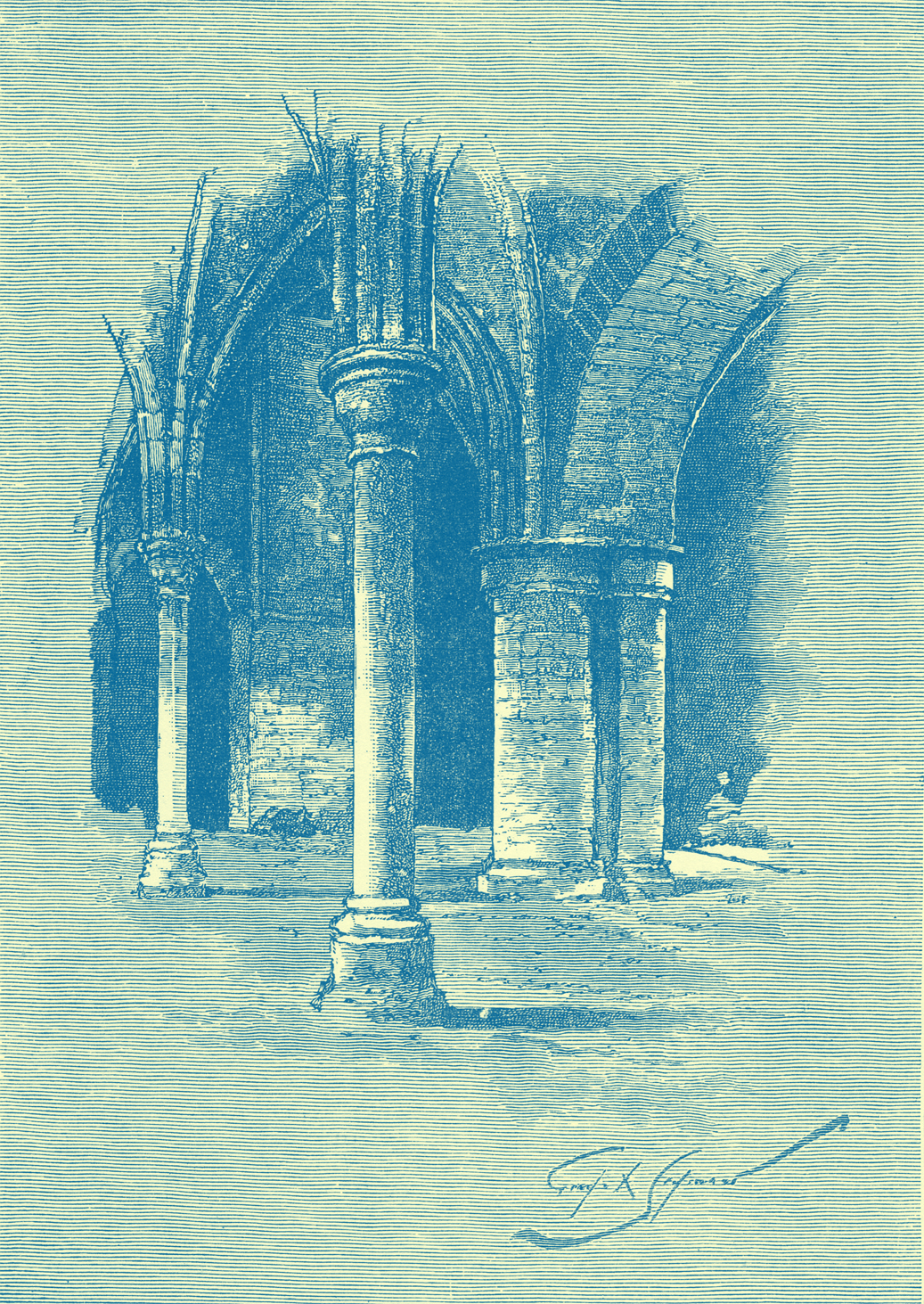 Among the Crypts dating from Norman times, that beneath Canterbury Cathedral takes the pre-eminence. It has been rightly said that “no Crypt in the world . . . . is so stupendous . . . . or so interesting, either structurally or historically.”‡ Access is gained from the “Martyrdom,” or lower north cross aisle, and it extends under all parts of the Cathedral eastward of the choir screen. It was probably constructed somewhere between the years 1096 and 1107, and 50 apparently consists of an endless labyrinth of arches, which gradually grow higher towards the east end. The piers, also, which support them, advance from thick stumpy blocks of stone to graceful slender columns, the decorations on the capitals of which the sculptor has, in many cases, never finished.

This Crypt had been the scene of several historical events of importance. Here it was that the remains of Thomas à Becket were first buried after his martyrdom in 1170, and hither came afterwards King Henry II., the author of his death, in pilgrim garb and with bare and bleeding feet, to do penance for his crime. The Royal pilgrim received flagellation — five strokes from each prelate and abbot, and three from each of the eighty monks, being administered to his prostrate form. He afterwards spent the whole night in the vault before his victim’s shrine. The south aisle of the Crypt had been used for divine service, since the year 1568, by the Walloons and French Huguenot refugees. Their looms were originally set up here, and although the weaving has long ago been discontinued, the French service is still carried on to a small congregation.

The Crypt beneath the eastern part of Gloucester Cathedral dates from 1089-1100, and was restored in 1847. It consists of a large central compartment, with an ambulatory opening into several smaller chapels. The main arches are supported by massive piers, and the central portion is sub-divided by rows of small columns, from which the groining springs. In the ambulatory this is very fine, and is supported by clusters of semi-circular pillars, built round the piers. Here, too, may be seen a fine example of the zig-zag moulding. The walls are about eighteen feet thick, and were originally pierced with small splayed windows. Remains of altars and piscinæ are also to be found in the various side chapels.

There is a rude Norman Crypt under the eastern portion of the Cathedral at Winchester. Entrance is gained from the north transept. From it an accurate idea can be obtained of the original plan of the cathedral.

A fine apsidal Crypt exists beneath the choir and aisles of Worcester Cathedral. It is considered to be the work of Bishop Wulfstan, and probably dates from about 1084. Its height is eight feet nine inches, and the vaulting is 52 supported by three rows of pillars. A small chapel still remains at the west end, and it is assumed that others of a like nature were contained in the original plan.

In some cases Crypts are made to play the part of ossuaries or charnel-houses. The most noted instances are those at Hythe, Rothwell, and Ripon.

The Crypt beneath the church of St. Leonard, Hythe, Kent, is one of the most famous of these. It contains an enormous quantity of human bones, which are said to be the remains of the Saxons and Britons who fell in a sanguinary conflict near the spot in the year 456. The bones are piled all round the vault in regular order. First a row of grinning skulls, and then a row of arm and leg joints — thus they are stacked from the floor upwards, and certainly present a most gruesome appearance to any visitors who are curious enough to inspect this strange anatomical museum. In 1886, an accumulation of soil was removed from outside the north wall, and revealed a fine early English doorway. The vault is beautifully groined, and is lighted by lancet openings at the east end. 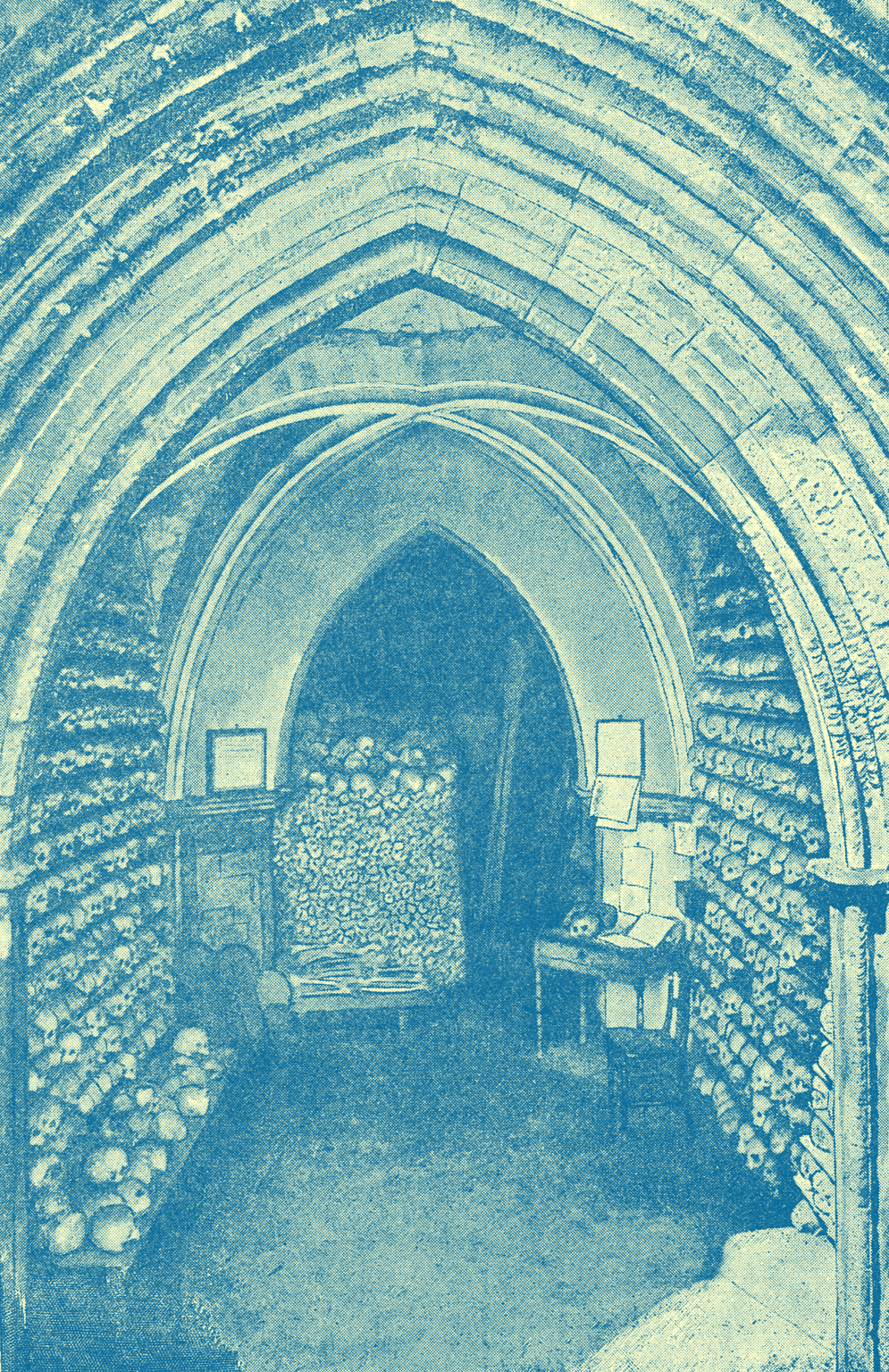 The ossuary at Rothwell Church, Northamptonshire, 55 it beneath the south aisle. It was accidentally discovered about the year 1650, by a sexton who was endeavouring to dig a grave in the aisle above. It contains many thousands of bones, which, like those at Hythe, are stacked in orderly rows. Some of these bones are of great size, but it is quite a matter of conjecture as to how they came to be deposited here. No battle has been fought nearer than Naseby, but they are far too numerous to have been the result of this engagement. Nor can they have been the accumulated dead of the town of Rothwell itself, for it is much too small to admit of such a theory. Many have been the attempts to hazard a conjecture which would account for the presence here of these numberless bones, but so far the question has never been settled. Since the vault was opened, the stacks of bones have much diminished in size, owing to the action of the air, and one of them has fallen down, revealing a cavernous recess behind filled with these decaying relics of humanity.

The charnel-house at Ripon is beneath the chapter-house, but the collection of bones it contained was removed to the cathedral yard in 1865. It is now used to house a collection of 56 interesting fragments of architecture, notably some thirteenth century sepulchral slabs discovered under the great east window in 1832.

Crypts, or undercrofts, have several times been discovered in existence beneath the domestic architecture of our great cities. In London quite recently a fine specimen containing thirteenth century work was found beneath an old house in Britton’s Court, White Friars.§ After the rubbish of centuries had been cleared from the interior, its dimension were found to be about five feet from the crown of the arch to the floor, and about fourteen feet square. It is supposed to have formed part of a convent founded in White Friars for the Carmelites by Sir Robert Gray in 1241.

Other Crypts of a like nature have been discovered from time to time in London, notably at the junction of Leadenhall and Fenchurch streets in Aldgate, and more recently under Laurence Pountney Hill.¶ Efforts were made to prevent the destruction of the latter, but they were of no avail, and it has now been effectually demolished.

Thus far, all the Crypts which have passed 57 under review have dated back to the early days of ecclesiastical architecture. This paper would however, be incomplete without a reference to the famous Crypt under S. Paul’s Cathedral. It was constructed by the masterly hand of Wren, and is in exact proportion with the structure above. Here are the massive piers on which the edifice was founded, and here in one corner reposes the dust of the great architect, who conceived the plan from which it was built. In the centre lie the bodies of England’s heroes, Wellington and Nelson. Grouped in the recesses around are the graves of many of our most celebrated artists, soldiers, engineers, musicians, travellers, and divines, and within the communion rails at the east end may be seen some of the monumental relics of Old Saint Paul’s, which escaped the great fire. In this little under-world thronged with memories of the mighty dead, service is performed at eight o’clock every morning. Here, therefore, we may fitly take leave of our subject, and pause awhile and listen to the words of praise and prayer as they echo and re-echo through these gloomy caverns formed in the great heart of London Town.

§  A very good sketch of this Crypt appeared in the Daily Chronicle of November 12th, 1895.