THE old jars found in various churches are supposed to have been used for the purpose of improving the resonance of the sacred edifice, after the manner of the brazen “Echeia,” noticed by Vitruvius,* as used in some ancient Roman Theatres. “It is certain,” writes Sir. E. Beckett,† “that the ancients had devices for improving the acoustics of large buildings, besides their better knowledge of the requisite proportions, which we have lost altogether; for in the days of the vast ancient theatres, such as the Coliseum at Rome, ten times as many people could see and hear as in modern churches. And they had a peculiar contrivance of horizontal pots along the seats, which are understood to have augmented the sound in the same way as a short and wide tube presented to a hemispherical bell when struck, augments its sound.” Hence the jars, 35 which have been occasionally discovered during the restoration of certain churches in different parts of the country, have generally been considered survivals of this old custom. 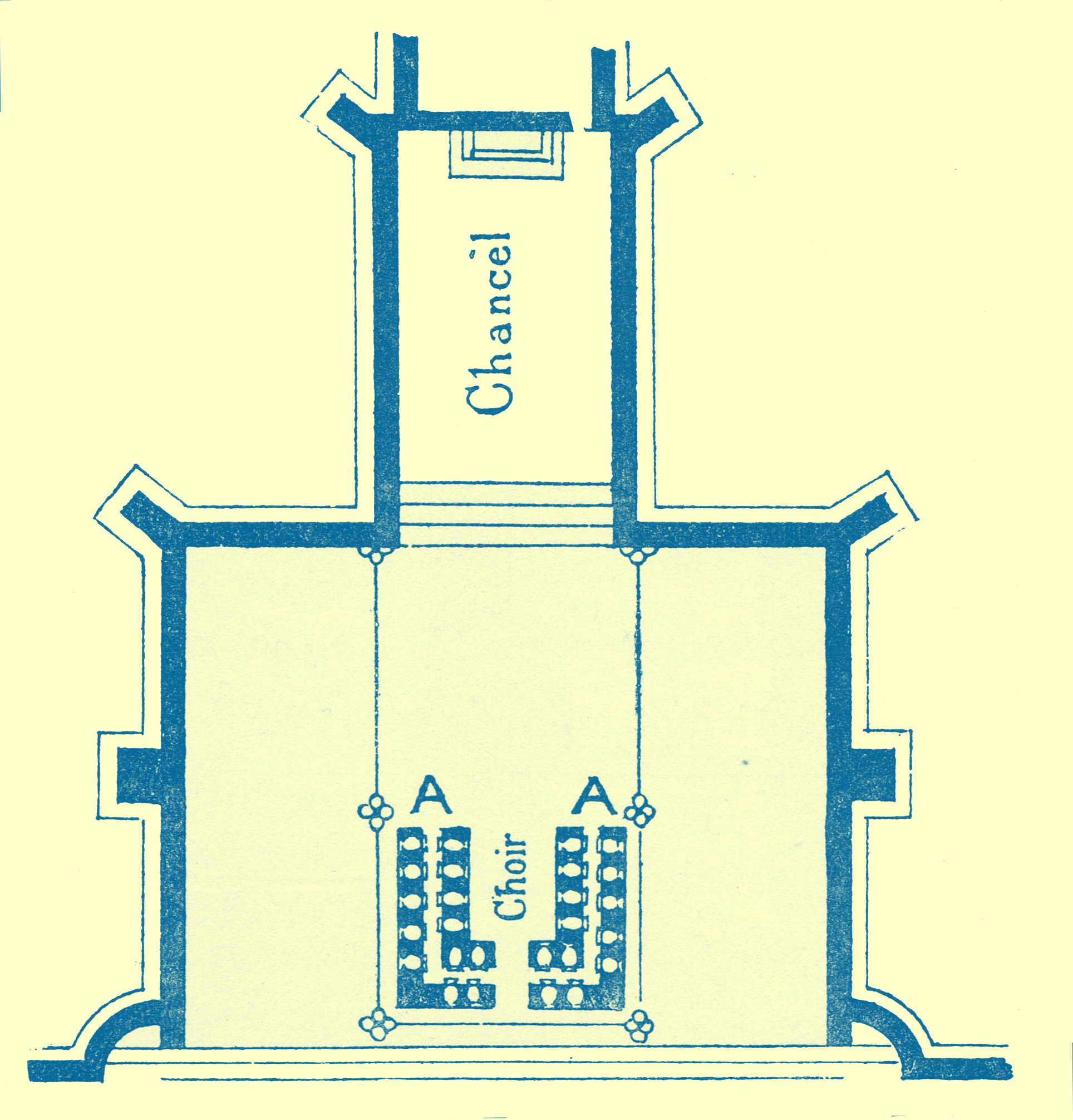 In Norwich the first discovery of these jars was made at the Church of St. Peter, of Mancroft, in 1850, where, immediately under that part of the church formerly occupied by the choir stalls, were found two trenches running eastward as far as the stalls probably extended, being returned towards 36 the west where the screen stood, and discontinued for four feet at the entrance to the choir; in fact, lying like two letters

placed face to face. Each trench measured thirty inches wide, about three feet deep, paved at the bottom with yellow glazed tiles about eight inches square, and lined or bounded on either side by a low rubble wall one foot in thickness, into which wall were built numerous red earthen jars, having their mouths directed towards each other, within the trench, and presenting the appearance of guns 37 projecting from a ship’s side. Ten years later a second discovery was made at St. Peter, per Mountergate, of a similar character. A probable conjecture of the system is furnished by the jars at St. Peter, Mancroft, having no ears nor handles. Those at St. Peter, per Mountergate had both. 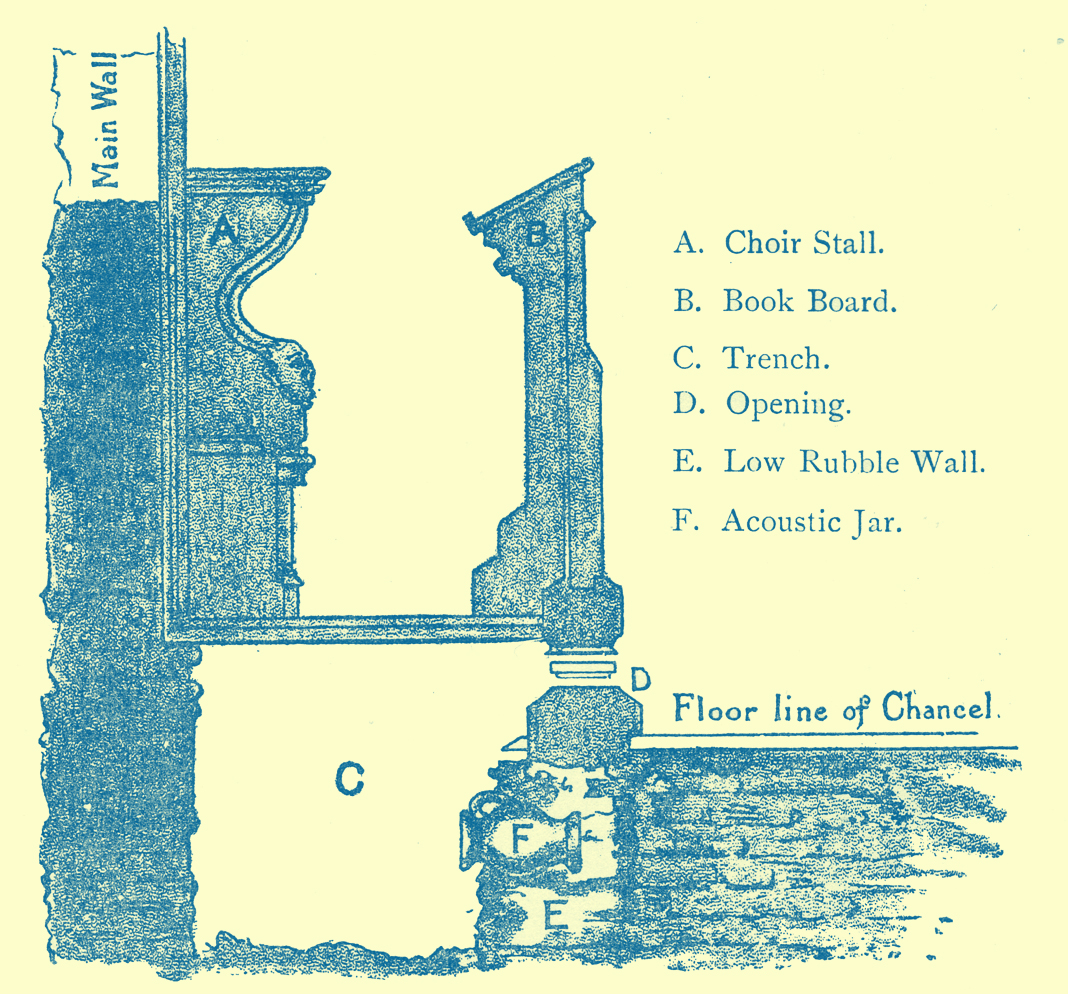 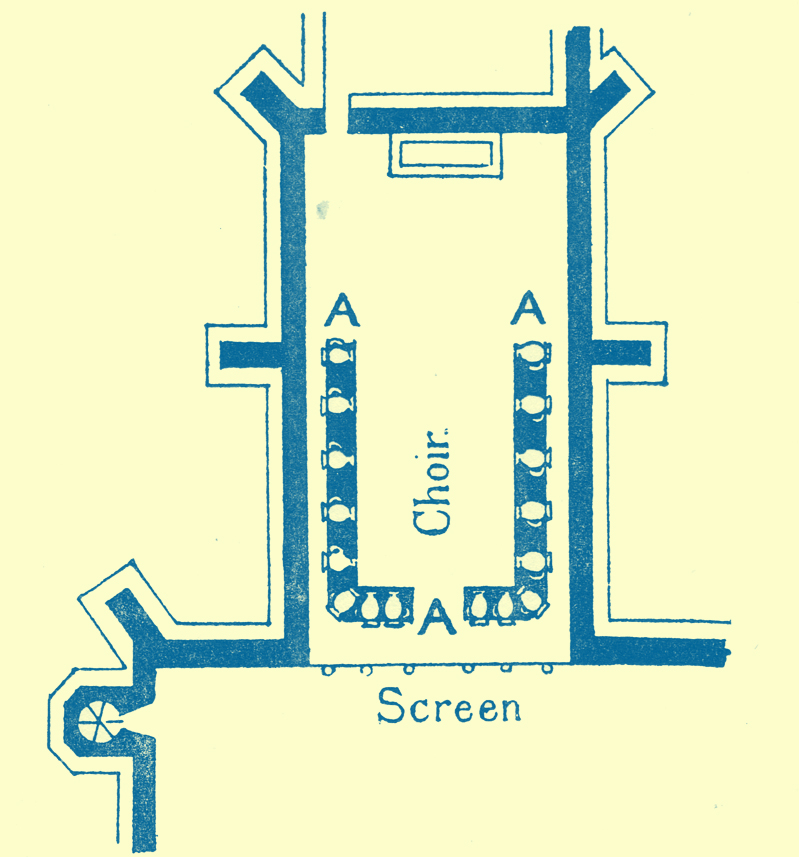 Position of Acoustic Jars in St. Peter’s, per Mountergate, Norwich.

Mr. Gordon Hills‡ mentions two interesting finds — one was at East Harling Church, Norfolk, where four jars were brought to light during repairs of the roof, arranged at about equal spaces along the north side of the chancel, and resting upon the top of the wall above the wall-plate.

The other discovery was at the church of Leeds, near Maidstone, Kent; where forty-eight to fifty-two earthenware pots were found, in August, 1878, embedded in the top of the nave wall on both sides of the church, immediately under the wall-plate. Below the jars in the north side was discovered a very remarkable arrangement consisting of two soundholes, made apparently for the purpose of carrying the effect into the north aisle.

These jars have been pronounced to be of Romano-British make.

In other parts of England, the archæologist has had brought under his notice specimens of the same practice. At Fairwell, Staffordshire — found while the church was being pulled down, in 1747; at Denford Church, Northamptonshire; at St. Peter’s Upton Church, near Newark; at St. Olave’s, Chichester; and at St. Clement’s Church, Sandwich, high up in the chancel.

Two cases were discovered in Devonshire, one at Luppitt Church, and the other at Ashburton, where the jars were found on the inside of the chancel walls in 1838, when in the course of repairs the old plaster was removed.

The jars lay on their sides, their mouths directed to the inside of the church, covered over with a piece of slate to each, and that hid behind the plaster.§

At Fountains Abbey, several earthenware vessels were discovered in removing the earth and stones from the floor in the basement of the now destroyed choir screen, at the entrance to the choir. These jars were laid in mortar on their sides, and then surrounded with the solid stonework, “their necks extending from the wall like cannons from the side of a ship.” This was, in all probability, an acoustic contrivance similar to those already mentioned, but several explanations have been suggested for their existence, one being that these jars were used to burn incense, but their mouths must have been hidden when the walls were standing.

Another solution is that they were intended to receive the ashes of the heart, or some other portion of the body, in case a canon attached to the church should will that any part of his remains should be so deposited.

Other suggestions are, that they were for wine, etc., to drink success to the commencing building; 40 for dove-cotes or columbaria; for warming apparatus; for ventilation; but most probably for acoustic purposes. The question first received the attention of French archæologists upon the discovery at Arles; and was a second time brought under their notice, in 1861 by a Swedish architect and two Russian architects, who made inquiry of the Parisian savants as to whether “cornets” or pots of baken earth were found in the interior walls, or the vaults of French churches, as was frequently the case in the churches of Sweden and Denmark.

The discovery at Arles was cited in answer, and a passage was quoted from MS. of fifteenth century, which throws so much light on the subject as to leave it no longer doubtful.

The passage occurs in a Chronicle of the Celestins of Metz, under date 1432. It is as follows: — “It was ordered that jars should be put into the choir of the church of this place, because they made the singing better and resound more.” Abbé Cochet, of Rouen, reports several occasions in which he has met with vases of this character. At Montivilliers, jars with conical base were found at the four angles of the vault of the choir. At Fry, canton Argueil, four jars with handles. At S. Laurent-en-Caux, a large earthen vessel 41 placed in one of the angles of the choir, and entirely enveloped in mortar; its form well adapted for acoustic purposes, entirely unsuited for any other, being a cone closed at each end, and having no opening, but a neck issuing from the shoulders, and appearing in the face of the wall. 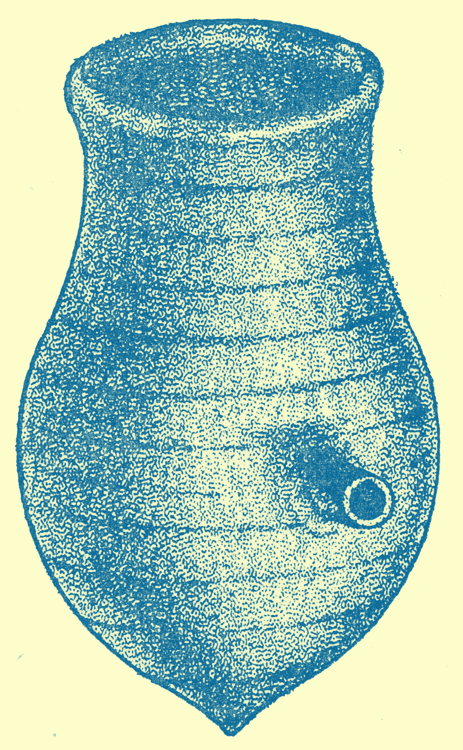 An additional proof of this use is furnished from a diatribe of the seventeenth century, “L’Apocalypse de Meliton,” written against the religious orders: — “Of fifty choristers that the public maintain, there are sometimes not more than six present at the office: the choirs are so fitted with jars in the vaults, and in the walls, that six voices make as much noise as forty elsewhere.”

Acoustic jars were also found some years ago in the walls of St. Mary’s Church, Youghal, Co. Cork, in the course of restoration.

In the process of repairs the old plastering was hacked off the walls, and there was discovered at the western end of the north wall of the chancel, 42 and at about twenty-five feet from the ground, a series of orifices, five in number, each formed in a piece of freestone, and varying from three to six inches in diameter, and which were found to be vents of an equal number of earthenware jars, placed immediately behind them, and imbedded in the masonry; the vessels were placed at irregular distances from each other. On examination, the jars were found to be lying on their sides, perfectly empty, some being well glazed, others unglazed.

Subsequently, five similar jars, but of a smaller size, were discovered in the same position at the opposite side of the chancel.¶

“These orifices are now open,” writes Mr. Richard Rolt Brash,** “and the arrangement restored to its original purpose, and I can testify to the effect produced by these acoustic jars.” I have frequently worshipped in the church, and have been many times struck with the fact that when kneeling at the extreme end of the north transept, I could hear most distinctly the Communion Service, though read by a person of very moderate power. The voice appeared to have a 43 peculiarly sonorous and ringing tone. The hearing in other parts of the church was equally satisfactory.

Numerous instances of this practice have been found abroad, as in Strasbourg Cathedral. In 1842, in the church of St. Blaize, at Arles, a number of horn-shaped earthenware jars and pots were discovered built into the walls,†† and in the vaulting of St. Martins, at Angers; and in the walls of St. Jacques et les Innocents, at Paris, similar jars have been found.‡‡

Occasionally the skulls of horses have been found in sacred buildings, the popular idea being that, like earthenware jars, they were built in for acoustic purposes.

[The link above, leads to the article mentioned, with the additon of a modern photograph of a crumbling wall with imbedded jars, taken by Bill Thayer when he was gallivanting through the Italian countryside in quest of Roman ruins. — Elf.Ed.]