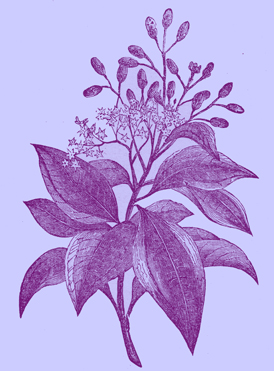 
This is a species of laurel, growing in the island of Ceylon. It resembles the willow in form, and grows to the height of twenty or thirty feet. The bark, which is at first green, afterward 326 becomes red. The leaf, on the contrary, is at first a flame color, but in the course of time changes into a deep green. The flowers are small and white, but have an agreeable odor, like that of the lily of the valley. The fruit is shaped like an acorn, but is not so large. The cinnamon which we use comes in long, thin pieces of bark, rolled up, and of a reddish color.

It is said that there are several varieties of the cinnamon-tree, some of which yield the true cinnamon, and some cassia. The bark of the cinnamon-tree produces an aromatic oil; from the root camphor is extracted; and from the leaves oil of cloves. From the fruit a terebintaceous ethereal oil is obtained. The finest cinnamon is taken from the middle-sized branches, an inferior kind from the young shoots, and from the larger branches a thicker kind of little value.

Cinnamon is also mentioned in other parts of the Bible as a perfume.

This article was also known to the European nations from high antiquity. The Greeks obtained it from the Phœnicians, who were the great merchants of those remote ages.

It appears that the cinnamon-trees are not barked till they are about nine years old. The peeling begins in May and ends in November. Cinnamon-trees are produced in China and Cochin China, but this is probably a different species from that of Ceylon.