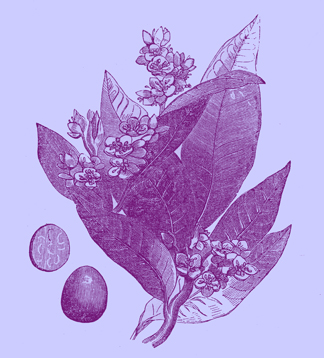 
Camphor is produced from two trees — one, the cinnamon camphor, a native of Japan, China, and Cochin China; the other, the proper camphor-tree, found in Borneo and Sumatra.

Camphor is found to exist in every part of the cinnamon-camphor-tree, root, stem, branches, and leaves. These are chopped in pieces, and the gum is extracted by a process of distillation and volatilization. This is what is called crude camphor.

In the other tree, camphor is found to exist in a solid form, along with camphor-oil, occupying the place of the pith. When tapped, or opened, while young, nothing but oil flows; but in time, a great part of this assumes the solid form, and is 317 found, at intervals, along the trunk, in pieces a foot or a foot and a half long. The process of extracting the oil is effected by means of a Malay axe, used to lay open the trunk about eighteen inches from the ground to near the heart, when a small incision is cautiously made, and the oil, if present, gushes out, and is received into bamboos and other vessels. If camphor is suspected to be present, the tree is felled, cut into pieces about a fathom long, which are then split, and the camphor is found in the pieces of the length stated, and about the circumference of the human arm. A tree of moderate size may yield about eleven pounds, while a very large one may produce double that quantity. The camphor so obtained is called “Se Tantong,” or head-camphor; but the wood which surrounds the camphor, on being scraped, yields an inferior sort, called belly and foot camphor. The camphor from this tree is much less volatile and transparent than from the former.

In the Song of Solomon, i. 14, it is said: “My beloved is unto me as a cluster of camphire in the vineyards of Engedi.” Again, in chap. iv. 13: “Thy plants are an orchard of pomegranates, with pleasant fruits; camphire, with spikenard.”

Camphor is one of the most useful of medicines, and is used both in the form of vapor and in the solid state. It is administered in the low or sinking stage of fevers, and especially when the nervous system is much depressed. It is also a valuable remedy for chronic nervous affections, as well as a multitude of other complaints.

Camphor exits in some degree in several trees and plants besides those mentioned.