MONG the memorial crosses of Europe, those of Queen Eleanor are the most elegant and historically interesting. Edward I. was blessed with a devoted wife, who accompanied him in his expeditions and wars. He took part in the last of the Crusades, and was, by an assassin, wounded by a poisoned dagger. His wife, it is said, saved his life by sucking the venom from the wound. The English people greatly loved her; she was ever ready to comfort those in trouble, and redress wrongs. She was married in 1254, in her fifteenth year, and died at Harby or Hardeby, Nottinghamshire, on November 20th, 1290, when on her way to join the king in Scotland. She appears to have been ill for some time, and, on October 18th, six weeks before her death, a mark (13s. 4d.) was paid to Henry of Montpellier for syrups and 139 other medicines for the queen’s use. Leopardo, her own physician, was in attendance. The king deeply mourned her loss, and had her remains conveyed to Westminster Abbey for interment. An elegant cross was erected at every place where the funeral procession rested. Fifteen of these crosses have been traced. The details of the queen’s death and burial are hotly-contested historical problems, and no two historians agree in their statements. Of the crosses erected by Edward, only three remain, those at Northampton, Gedington, and Waltham Cross. A picture of the Northampton Cross, as it appears to-day, enables us to realise how elegant it must have been when newly erected, and before time’s defacing touch and man’s mischief had robbed it of much of its beauty.

The idea of the Eleanor Crosses was not a new one, it was, as stated by Rimmer, in his “Ancient Stone Crosses of England,” “an extension of the lich-gate system, for a corpse always rested under a ‘lich.’” At the churchyard gates in some places, notably in Cornwall, are large lich-stones, on which to rest the coffin while the funeral procession is waiting for the officiating minister. At St. Winnow, Cornwall, an example 140 may be seen. In some parts of the country, as at Lustleigh, Devonshire, there are resting stones for the coffin on its way to the burial ground, some distance from the church. The coverings over the lich-gates are usually of wood, but sometimes they are of stone, as at Birstal, near Leeds. At Barking, Essex, are chambers over the lich-gate, and one was formerly known as the Chapel of the Holy Rood. In other parts of the country are examples of chambers over the lich-gate. A great many of the kings of France were buried at the Abbey of St. Denis, and on the road leading to it from Paris, crosses were erected at almost every few hundred yards. The Revolution swept away the monuments.

The cross at Cheape was an Eleanor Cross, and erected shortly after the death of the queen. It is generally believed that this cross was one of the finest of its class, but no reliable description has come down to us. Master Michael, a mason of Canterbury, was its builder.

In 1441, the rebuilding of the cross, in combination with a drinking fountain, was commenced, and was hardly completed in 1486. Timber and lead were largely used in the second erection, which was frequently regilded. It 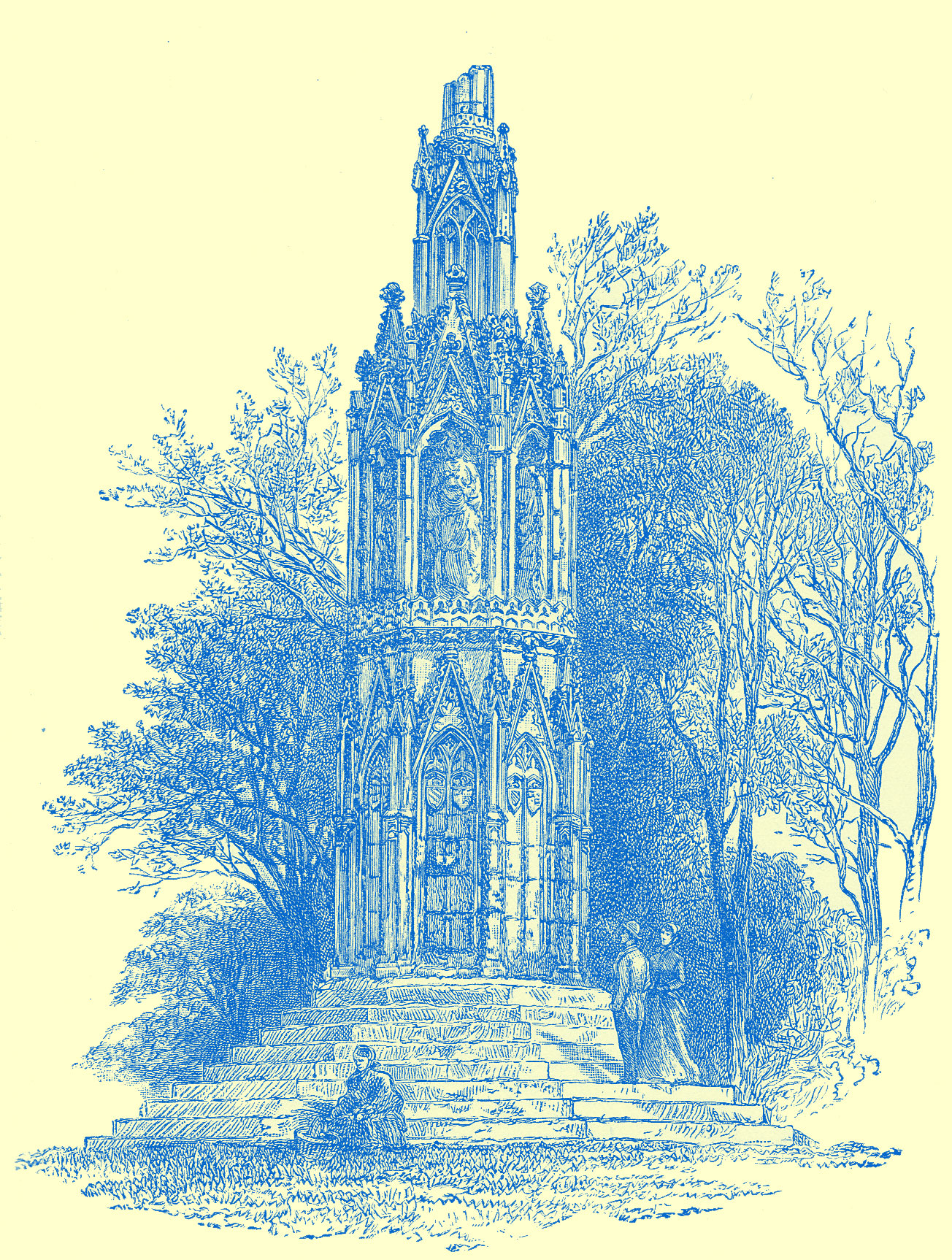 appears to have attained its greatest beauty in the reign of Edward VI. At his accession to the throne, it underwent considerable alterations and improvements.

A painting of the period, shewing the procession of Edward VI. to his Coronation, gives us a good idea of the cross as it appeared in 1547. It may be briefly described as stately and graceful. There are three octangular compartments, and each is supported by eight slender columns. Its height is calculated at about thirty-six feet; the first storey being about twenty feet, the second, ten, and the third, six. Amongst the statues which ornamented the structure may be mentioned, in the first niche, most likely, a contemporaneous pope, round the base of the second were four apostles, and above them was placed the Virgin, with the infant Jesus in her arms. Four standing figures filled the top niche, and a cross, surmounted with the emblematic dove, completed the ornamentation, which was extremely rich.

It long remained a pride of the city, but as time ran its course changes of sentiment came about. Towards the close of Elizabeth’s reign, it was denounced as a relic of Popish superstition. 143 On the night of the 21st June, 1581, an attack was made by some fanatics on the monument, and much of the carving mutilated. “The Virgin,” says an old writer, “was robbed of her son, and her arms broken, by which she staid him on her knees; her whole body was haled by ropes, and left ready to fall.” Although a reward was offered by the queen, the offenders were not discovered. Fourteen years later, the effigy of the Virgin was repaired, and “a newe sonne, misshapen (as borne out of time), all naked, was laide in her armes, the other images continuing broken as before.”

Next, an attempt was made to remove the woodwork, and in place of the crucifix erect a pyramid. A figure of the goddess Diana replaced the Virgin. Diana was represented for the most part naked, “and water, conveyed from the Thames, filtering through her naked breasts, but oftentimes dryed up.” Elizabeth expressed her displeasure at the operations of the fanatics, and gave directions for a plain gilt cross to be placed on the summit of the monument, saying such a simple symbol of the faith of the country ought not to cause scandal. The Virgin was again restored, but, in less than a fortnight, the figure was mutilated, and the child taken away.

In 1600, the cross was rebuilt, and the question of restoring the crucifix gave rise to considerable discussion. The matter was referred to the authorities of the Universities. All sanctioned it except Dr. Abbot, afterwards Archbishop of Canterbury, but there was not to be a dove. In a sermon of the period, the following passage occurs: “Oh! this cross is one of the jewels of the harlot of Rome, and is left and kept here as a love-token, and gives them hope that they shall enjoy it and us again.” The new cross, which was protected by strong iron railings, was much inferior to the preceding one. In style, it was half Grecian and half Gothic. Images of a superstitious character were superseded by those of apostles, kings, and, prelates, and of the original cross only the crucifix was retained. For many years, it remained without giving rise to any contention. The Puritanical zeal increased in course of time, and on the night of January 24th, 1641, it again suffered at the hands of the fanatics.

At this time, commenced a literary warfare, in the form of pamphlets, respecting the cross. These were followed by its destruction. Robert Harlow was deputed by Parliament to carry out 145 the work. He went to the cross with a troop of horse and two companies of foot soldiers. How completely he executed his orders may be gathered from the official account. It states: “On the 2nd of May, 1643, the cross in Cheapside was pulled down. At the fall of the top cross, drums beat, trumpets blew, and multitudes of caps were thrown in the air, and a great shout of the people with joy. 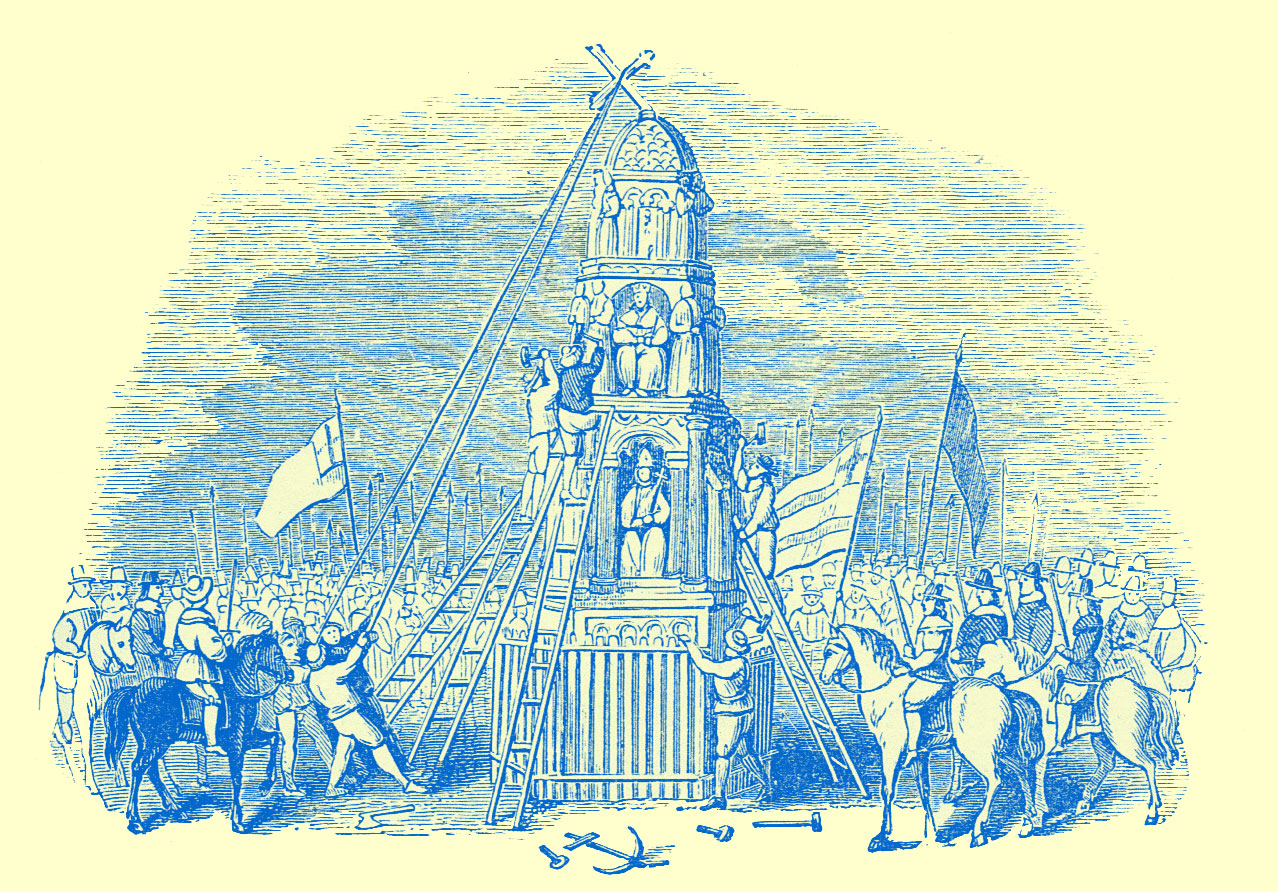 The 2nd of May, the almanack says, was the invention of the cross, and the same day, at night, were the leaden popes burnt [they were not popes, but eminent English prelates] in the place 146 where it stood, with ringing of bells and a great acclamation, and not hurt at all done in these actions.”

The author of “The Old City” (London, 1865), a work to which we have been indebted for some of the particulars included in this paper, adverts to a curious tract published on the day the cross was destroyed. It bears the following title: “The Downfall of Dagon; or, the taking down of Cheapside Crose; wherein is contained these principalls: 1. The crosse sicke at heart. 2. His death and funerall. 3. His will, legacies, inventory, and epitaph. 4. Why it was removed. 5. The money it will bring. 6. Noteworthy, that it was cast down on that day when it was first invented and set up.” An extract or two from this publication can hardly fail to interest the reader. “I am called the ‘Citie Idoll,’” says the tract, “the Brownists spit at me, and throw stones at me; the Famalists hide their eyes with their fingers; the Anabaptists wish me knockt in pieces, as I am to be this day; the sisters of the fraternity will not come near me, but go by Watling Street, and come in again by Soaper Lane, to buy provisions of the market folks. . . . I feele the pangs of death, and shall 147 never see the end of the merry month of May; my breath stops — my life is gone; I feel myself a-dying downards.” The bequests embrace the following: “I give my iron work to those which make good swords at Hounslow, for I am Spanish iron and steele to the backe. I give my body and stones to those masons that cannot telle how to frame the like againe, to keep by theme for a patterne, for in time there will be more crosses in London than ever there was yet.” The epitaph is as follows:

“I looke for no praise when I am dead,
For, going the right way, I never did tread.
I was harde as an Alderman’s doore,
That’s shut and stony-hearted to the poore.
I never gave almes, nor did anything
Was good, nor e’er said, ‘God save the King.’
I stood like a stock that was made of wood,
And yet the people would not say I was good,
And, if I tell them plaine, they’re like to mee —
Like stone to all goodnesse. But now, reader, see
Me in the dust; for crosses must not stand,
There is too much crosse tricks within the land;
And, having so done never any good,
I leave my prayse for to be understood;
For many women, after this my losse,
Will remember me, and still will be crosse —
Crosse tricks, crosse ways, and crosse vanities.
Believe the cross speaks truth, for here he lyes.”