[UPDATE MAY, 2014, — I have finally figured out a way to decently reproduce the rest of this book on the web. The Latin text was left out of the original online version for a long time. Now it is there. The reason for the delay is that the scribal abbreviations and arcane punctuation marks used in the Latin manuscript, which were reproduced in Gunn's print edition of the MS. in the book, were not easily rendered into internet typography.

[At first, when I put this book online, I only did the English portions because of three particular paleological or textual design oddities in the book that I could find no way to duplicate with any accuracy for the web. These are the bugbears that stymied me for years:

[1. Medieval monks used a strange punctuation mark called a punctus elevatus, a sort of colon, with a flying period as the top part. which indicated a pause of some sort. The use is not clear to modern paleographers because there was no standard method of using it and it varied in function from MS. to MS. and from era to era. Even monks had a problem with punctuation!


There is no character in internet language for this. So this little doodad could only be shown by using an image. As it turns out, it is a pretty cute little doodad all by itself. Here's a punctus elevatus with a mirror image of it, to make a cartoony face, just for heck:


This little creature tickled me so much I finally succeeded in learning how to make a little icon of it to show in the browser tab for this book.

2. At the end of the Preface, there is a Greek phrase enclosed in a fancy border with two triangles at the sides at the end of the preface. I wanted to show it as text and not just use an image, so I also had to learn how to insert text with a transparent background over an image. This was not easy to do. It is a seriously demonic bit of coding to learn, because the directions on the w3.org site are not very clear. This required a lot of fumbling and swearing to accomplish. Voila!


3. Most importantly: since the printed Latin text also includes scribal abbreviations formed by small letters typed directly over some of the words, I had to find a coding method to allow for them, with the correct positioning. This was no cake walk, let me tell you. It is so hard, that it has not been done yet, anywhere else on the net, by anybody else, that I could discover.

I finally came up with a way. However, in order to preserve the position of these tiny words over the corresponding normal-sized words properly, the text had to be made with a fixed width. So it cannot be adjustable to fit different screen sizes. You will not be able to change the width of the Latin text block in your browser, so look at the Latin pages in a relatively large window!!! There was no other way to be able to come close to accurately reproducing this scribal shorthand, which Gunn conscientiously reproduced in the printed edition. Nobody else has figured out how to do it at all, without using images, which are not searchable. (I am ridiculously proud of this feat, by the way.)

Thus, the ability to render online small letters over large letters is my contribution to internet paleography! Feel free to reward me by visiting this page where you can support this site by buying something: not just giving me money without a physical memento to show for it. If knowing how to do this helps you, after my titanic struggles, then you will enjoy getting a great t-shirt to wear, a lump of coal to contemplate, or a signed copy of My Liary, as an aide-de-memoire should you need one, as you use the trick yourself when you are faced with a similar typographical coding dilemma. I will also happily explain it to you too. The method will be refined and simplified in future, if I ever need to use it again!

The frontispiece is now added. This is a 'Fac-Simile' of one page of the Latin MS. that listed the ancient names of the ancient cities of the Britons, e. g. Cair londein. The book I have is old and in terrible condition. Fixing the image is beyond my skill and patience. There are water stains and many of the brown blotches, which antiquarians booksellers call 'foxing,' for some unknown reason. Some day I may try again to fiddle with it, but that may have to wait another decade. 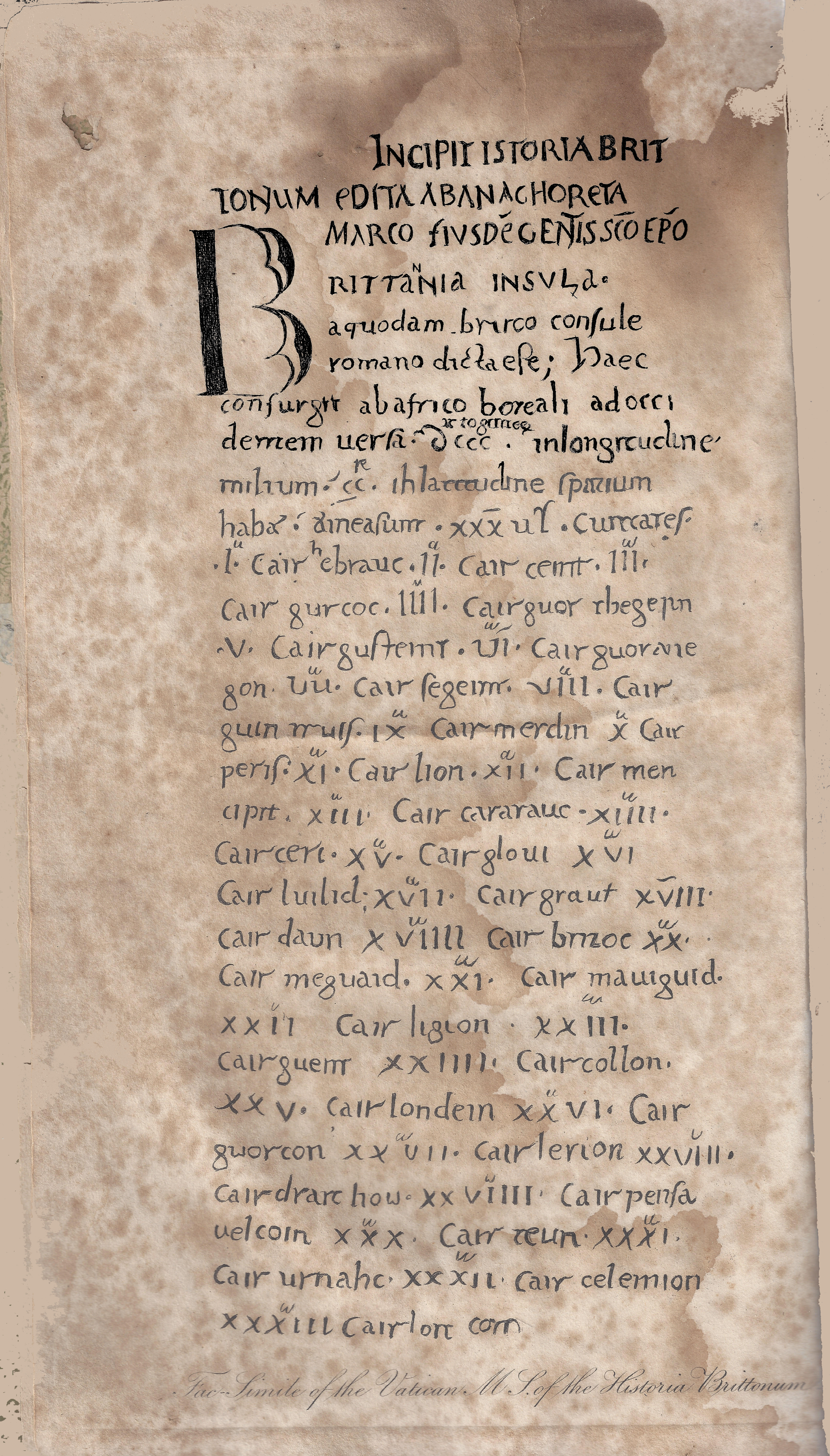 Fac-Simile of the Vatican MS. of the Historia Brittonum.


Lastly, the Notes in the book form one long, long section at the end of the written text. In fact, the Notes are the longest section of the book. So I have divided the Latin text and the English translation into four parts, each has the pertinent English notes at the bottom of the page. The Notes, in English, are the same for both the Latin text and the translation, and are duplicated on the two sets of pages, for simplicity of use.

There is also a link between the Latin and the English version at the top of the page so you can open them both up in separate windows and compare the text if you want to. The Latin text also has its own Latin footnotes which apply only to the Latin text, and these are above the English Notes on the pages of the Latin text.

Not only is the Latin now online, but I reproofed the English portions, and boy, did it need it! Despite that, my devotion to Bill Thayer is reinforced by his generous assistance in spotting even more typos, especially with Latin and Greek but also with plain old English (which sometimes even I can’t tell is my native language).

In sum, the entire online text of Gunnn's edition of the Historia Brittonum is now complete.]

It is a pleasure to put online The “Historia Brittonum” (The History of the Britons), Commonly Attributed to Nennius, translated by the Reverend William Gunn. He discovered the manuscript while visiting the Vatican Palace in Rome. It is attributed to Mark the Hermit, a sedadowy historical figure as the translator tells us in his introduction. He made the only printed edition of the text and carefully reproduced the medieval text: including the abbreviations, typos, and punctuation.

Mark the Hermit lived during the Anglo-Saxon period of England, before the Norman Conquest. He wrote, or copied, the manuscript of Nennius, which is one of the earliest histories of Ancient Britain. It begins with what was then believed to be the earliest history of the native Britons. The history is carried down to the author’s own time: 945 A. D.

This translation was used, almost verbatim, by J. A. Giles, in his book of Six Old English Chronicles, published about 30 years later, as he tells the reader in his preface. Giles’ book is the only other English translation of Nennius that is in the public domain and easily available to most people today. Gunn’s notes are much more extensive than those in Giles’ text. Downright fascinating some of them are, too — especially those in the Preface.

Delightfully, Gunn has included The History of Taliesen in English translation. This work is a poem by an early Welsh bard who is little known to most of us, but a dear figure to all that are interested in the early history of Wales and the Celts.

There are other manuscripts of Nennius, which include a Preface, more genealogical charts and some early Annals of Briton. Large chunks of Gildas appear to be incorporated in some of them as well. A bit of this will be added on here, in the future. The Latin transcription of the text is yet to be put online as well. If you would like to see it, just ask.

The translation is straightforward, easy to read and spares us much of the florid prolixity of many an ecclesiastical author of that period. This helps a lot in making this text so appealing.

Nennius is the first to mention Arthur of legendary fame, but in Nennius, he is called a General. The only historical notice is amazingly brief: 3 paragraphs only. He wasn’t promoted to kingship until the romance writers latched onto him a few centuries later. Nennius is the only chronicler that mentions him so close to the period in which he lived. After the interval from this history to Geoffrey of Monmouth, the Arthurian Cycle of legends bursts onto the scene in its full-fledged form. At least, that is what appeared to be the evidence at first, as long as the Welsh and continental writers were ignored by later historians.

Gunn provides a wealth of bibliographical material on the first Welsh historians who brought the rich horde of Celtic history and literature to the attention of the rest of England. The footnotes explain it all. Like I said, the comments by Gunn are a treasure-trove of good information.

Enough chat, get started [HERE] with the Title Page with the 200 year old 'Fac-Simile' of the page of the Mansucript that lists the cities in Britain in the first century A. D.Preface.