A Teacher of Dante and
Other Studies in Italian Literature,

An ounce of story, a jigger of song and a dram of drama! Plus a whole lot of fascinating historical and biographic details on Italian Poets, Novelists and Playwrights. That’s what you’ll find in this fascinating book: A Teacher of Dante and Other Studies in Italian Literature, by Nathan Haskell Dole, published in 1908.

Five guys are the main literary rock stars here: Brunetto Latini, Dante Alighieri, Francesco Petrarca (or Petrarca), Giovanni Boccaccio, Carlo Oswaldo Goldoni and Count Vittorio Alfieri. They were rock star equivalents too, in those days before electricity! This very catchy author discusses the literary and cultural history that preceded their fame, why they are famous, and the result of their fame then and in the following generations.

Dole was clearly a fan, and clearly very smart. He was one of the founders and the first President of the Bibliophile Society of Boston, which began in 1901. Its members included some of the wealthiest and most powerful men in America, including J. P. Morgan and Henry Cabot Lodge. He remained its President for years. Dole not only loved and collected beautiful old books, he read them. His tastes were broad and his interests eclectic. He also spoke Italian: you have to speak Italian very well to appreciate Italian poets, especially Dante!

Dole and his friends at the Biliophile Society, were responsible for two huge multi-volume collections of literary excerpts that I have, and am slowly (very slowly) putting online. The material is not duplicated in the sets either! They wanted people to have lots of information at hand. These are mini-libraries in themselves, with excerpts that begin with the dawn of the written word until their day.

Anyway, I am not much of a Dante fan, and I am not a theatre buff, but despite that I could not help but be fascinated with the essays on these subjects. I really only wanted to put up the Brunetto Latini and Boccaccio chapters, but then I decided to work on my ’Intention Deficit Disorder’ and finish the blasted book. Well, he held my interest despite myself. I got sucked in, and thoroughly. So all of it is here now. And now I like Dante a little better, Brunetti better still, Boccaccio even more and now I’m even a budding fan of Goldoni and Alfieri!

That’s what Dole can do, he is enthusiastic and can effectively arouse some enthusiasm in you for what he adores.

As I said, Dole read voraciously and had some uncommon old books, so some of the details he provides are hard to find. He does his own translations, too (mostly), which are enticing and don’t make you throw your hands up in despair at his idea of good poetry.

In fact, he has information on Boccaccio’s last Will here, which mentions the convent of San Sepolcro as one of his legatees and I could find nothing about this convent on the web. At first, I thought it was a typo for San Spirito. However, since I know how deeply read Dole was, I decided to check further.

I e-mailed Dr. Michael Papio, the President of the American Boccaccio Society, and he was good enough to reply. He said that Dole was entirely correct! You can read more of our interchange in the notes on the page for that chapter. Plus the good doctor reminded me (and now I remind you) that this year is the 700th anniversay of Boccaccio’s birth! As good a reason as any to read that chapter.

I am wiser and happier after reading this book. (Knowing those extra luscious little details about people in history always makes me happy.) His survey of the development of Italian literature is thorough and wonderfully entertaining. He emphasizes how especially strong the classical roots of drama and literature are in Italy.

About the book: It has a pretty little book plate with the name of James L. Boren on it: 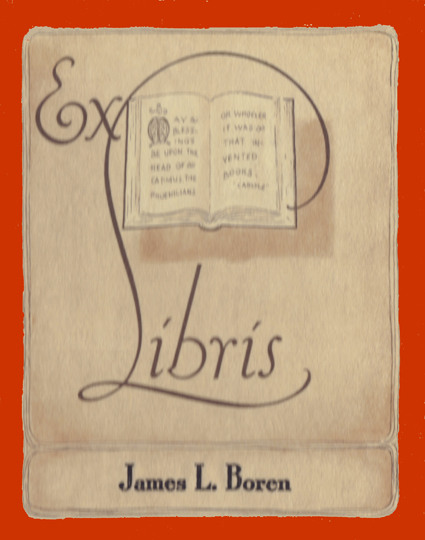 There were some typos, not many, and these have been emended, as always, and you can find them noted in the source code. I have put the Italian phrases in a lighter blue font, the Latin in rust, and the French in red.

I have tons of Italian material on my site and the underlined links will take you to either a story, a poem (in Italian sometimes, and with other English translations), or a bit of history, and occasionally a joke that is related to the person. I may go in and add appropriate castle pictures from other texts here to give you that total immersion feeling in the setting.

Its your turn now to see who you like best of these guys! click on the box below and go to it.