CHAP. VII. — The Church at large claims the
power of publicly inflicting the discipline
of Flagellation. Instances of Kings and
Princes who have submitted to it .

AS it was the constant practice of Priests and Confessors to prescribe Flagellation as part of the satisfaction that was owing for committed sins, the opinion came at last to be established that receiving this kind of correction was not only a useful but even an indispensable act of submission: without it, penitence was thought to be a body without a soul, nor could there be any such thing as true repentance. Hence the Church itself at large came also in time to claim a power of imposing castigations of the kind we mention upon naked sinners; and a flagellation publicly submitted to has been made one of the essential ceremonies to be gone through, for obtaining the inestimable advantage of the repeal of a sentence of excommunication; the Roman Ritual expressly mentioning and requiring this test of the culprit’s contrition.

These flagellatory claims and practices of the Western Christian Church, are, we may observe, one of the objections made against it by the Greek, or Eastern Christians, as the learned M. Cotelier, a Doctor of the Sorbonne, observes in his Monuments of the Greek Church: “When they absolve a person 77 from his excommunication (they say) he is stripped down to the waist, and they lash him with a scourge on that part which is bare, and then absolve him, as being forgiven his sin.”

Among the different instances of disciplines publicly inflicted by the church upon independent Princes, we may mention that which was imposed upon Giles, Count of the Venaissin County, near Avignon. This Count having caused the Curate of a certain parish to be buried alive, who had refused to bury the body of a poor man till the usual fees were paid, drew upon himself the wrath of the Pope, who fulminated against him a sentence of excommunication. And in order to procure the repeal of it, he found it necessary to submit to a flagellation, which was inflicted upon him before the gate of the Cathedral Church of Avignon.

But no fact can be mentioned more striking, and more capable of having gratified the pride of the Clergy, at the time, than that of Henry II., King of England. This Prince, having, by a few hasty angry words he uttered on a certain occasion, been the cause of the assassination of Thomas á Becket, Archbishop of Canterbury, expressed afterwards the greatest sorrow for his imprudence: but neither the priests nor the nation would take his word on that account: they only gave credit to the reality of his repentance, when he had submitted to the all-purifying trial of a flagellation; and in order the more 78 completely to remove all doubts in that respect he went through it publicly. The following is the account which Matthew Paris, a writer who lived about those times, has given of the transaction. “But as the slaughterers of this glorious Martyr had taken an opportunity to slay him from a few words the King had uttered rather imprudently, the King asked absolution from the Bishops who were present at the ceremony, and subjecting his bare skin to the discipline of rods, received four or five stripes from every one of the religious persons, a multitude of whom had assembled.

Another instance of Sovereigns who have been publicly flagellated, may also be reckoned that of Raymond, Count of Toulouse, whose Sovereignty extended over a very considerable part of the South of France. Having given protection in his dominions to the sect called the Albigenses, Innocent III., the most haughty pope that ever filled the Papal Chair, published a Croisade against him; his dominions were in consequence seized, nor could he succeed in having them restored to him before he had submitted to receive discipline from the hands of the Legate of the Pope, who stripped him naked to the waist, at the door of the church, and drove him up to the altar in that situation, all the while beating him with rods.

The last instance of a Sovereign who received a correction from the Church, was that of Henry IV. 79 of France, when he was absolved of his excommunication and heresy; and the discipline undergone by that Prince supplies the solution for an interesting question, that may be added to those above discussed, viz., Which is the most comfortable manner of receiving a flagellation? — It is by proxy. This was the manner in which the King we speak of suffered the discipline which the church inflicted upon him. His proxies were Messrs. D’Offat and Du Perron, who were afterwards made Cardinals. During the performing of the ceremony of the King’s absolution, and while the Choristers were singing the Psalm, Miserere mei Deus, the Pope, at every verse, beat with a rod on the shoulders of each of the two proxies; which shows how essential a part of the ceremony of an absolution flagellations have been thought to be; and also, how strictly the Church of Rome adheres to such forms as are prescribed by its ritual, or by the Pontifical, as it is called. Express mention was moreover made of the above beating, in the written process that was drawn of the transaction. Dominus Papa verberabat et percutiebat humeros Procuratorum, et cujuslibet ipsorum, virga quam in manibus habebat.

As a further indulgence to the King who was thus disciplined by proxy, and very likely also out of regard for the age in which the ceremony was performed, the two gentlemen who represented him, were suffered to keep their coats on, during the 80 operation; and the lashes seem, moreover, not to have been laid upon them with any great degree of vigour. However, some persons at the Court of France, either out of envy against the two above gentlemen, on account of the commission with which the King had honoured them, or with a view to divert themselves, had, it seems, circulated a report that on the day of the ceremony, the 17th of September, 1595, they had been made actually to strip in the Church, and undergo a dreadful flagellation. This report M. D’Offat contradicts in one of his letters, the collection of which has been printed; and he says, that the discipline in question was performed to comply with the rules set down in the Pontifical, but that “they felt it no more than if it had been a fly that had passed over them, being so well coated as they were.”

Very express mention of the above discipline was nevertheless made, as hath been above observed, in the written process drawn on the occasion; though the French Ministers would not suffer it to be joined with the Bull of Absolution, which was sent to the King for his acceptation, and in which no such account was contained. This, another French author observes, did not prevent the Italians from deriving triumph from the event, and saying that the King of France had been disciplined at Rome. 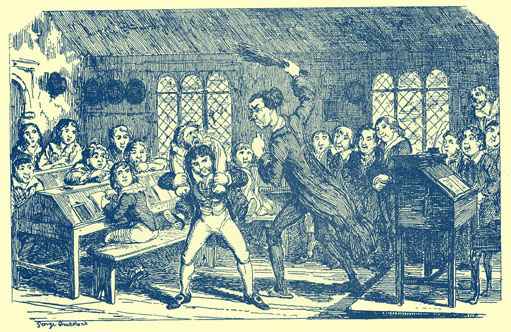 SCHOOL IN THE LAST CENTURY.

“TAKE DOWN HIS BREECHES !”
— Thackeray.

From the above two instances of Henry II. of England and Henry IV. of France (the authenticity of 81 which is beyond any doubt) we find that two crowned heads, Kings of the two most powerful States in Europe, both of the name of Henry, have publicly submitted to the discipline of flagellation, either in their own person or by proxy; the one to preserve his crown, and the other to qualify himself for taking possession of it.

It may be added that an instance of a Sovereign submitting to a flagellation may be seen in our days at every vacancy of the See of Wurtzburgh, a sovereign bishopric in Germany. It is an ancient custom in the Chapter of that Church that the person who has been elected to fill the place of the late Bishop, must, before he can obtain his installation, run the gauntlet, naked to the waist, between the Canons, who are formed in two rows and supplied with rods. Some say this custom was established in order to discourage the German Princes from being candidates for the above bishopric; but perhaps also the Canons who established the same had no other design than procuring the pleasure to themselves and successors, when they should afterwards see their equal become their Sovereign, of remembering that they had cudgelled him.

Other facts, besides that of Henry II., show that the power of the clergy was carried as far, at least, in England as in any other country. Bishop Goodwin relates that in the reign of Edward I., Sir Osborn Gifford, of Wiltshire, having assisted in the escape of 82 two nuns from the convent of Wilton, John Peckham, who was then Archbishop of Canterbury, made him submit, before he absolved him of his excommunication, to be publicly whipped, on three successive Sundays, in the Parish Church of Wilton, and also in the market and church of Shaftesbury.

Preserved in the Crypt of St. Martin’s
Church, London.