From Tales from the Fjeld, A Series of Popular Tales from the Norse of P. Ch. Asbjörnsen, A New Edition with more than a Hundred Illustrations by Moyr Smith, by Sir George Dasent, D.C.L; New York: G. P. Putnam’s Sons; (no date); pp. 116-120.

The Way of the World


ONCE on a time there was a man who went into the wood to cut hop-poles, but he could find no trees so long and straight and slender as he wanted, till he came high up under a great pile of stones. There he heard groans and moans as though some one were at Death’s door. So he went 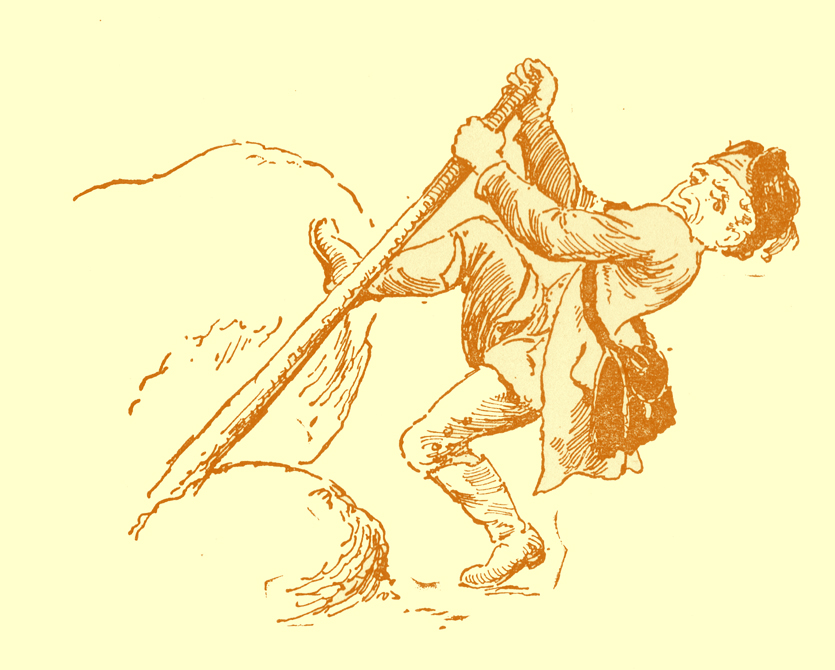 up to see who it was that needed help, and then he heard that the noise came from under a great flat stone which lay upon the heap. It was so heavy it would have taken many a man to lift it. But the man went down again into the wood and cut down a tree, which he turned into a lever, and with that he tilted up the stone, and lo! out from under it crawled a Dragon, and made at the man to swallow him up. But the man said he had saved the Dragon’s life, and 117 it was shameful thanklessness in him to want to eat him up.

“May be,” said the Dragon, “but you might very well know I must be starved when I have been here hundreds of years and never tasted meat. Besides, it’s the way of the world — that’s how it pays its debts.”

The man pleaded his cause stoutly, and begged prettily for his life; and at last they agreed to take the first living thing that came for a daysman, and if his doom went the other way the man should not lose his life, but if he said the same as the Dragon, the Dragon should eat the man.

The first thing that came was an old hound, who ran along the road down below under the hillside. Him they spoke to, and begged him to be judge.

“God knows,” said the hound, “I have served my master truly ever since I was a little whelp. I have watched and watched many and many a night through while he lay warm asleep on his ear, and I have saved house and home from fire and thieves more than once; but now I can neither see nor hear any more, and he wants to shoot me. And so I must run away, and slink from house to house, and beg for my living till I die of hunger. No! it’s the way of the world,” said the hound; “that’s how it pays its debts.”

“Now I am coming to eat you up,” said the Dragon, and tried to swallow the man again. But the man begged and prayed hard for his life, till they agreed to take the next comer for a judge; and if he said the same as the Dragon and the hound, the Dragon was to eat him, and get a meal of man’s meat; but if 118 he did not say so, the man was to get off with his life.

So there came an old horse limping down along the road which ran under the hill. Him they called out to come and settle the dispute. Yes; he was quite ready to do that.

“Now, I have served my master,” said the horse, “as long as I could draw or carry. I have slaved and striven for him till the sweat trickled from every hair, and I have worked till I have grown lame, and halt, and worn out with toil and age; now I am fit for nothing. I am not worth my food, and so I am to have a bullet through me, he says. Nay! nay! It’s the way of the world. That’s how the world pays its debts.” 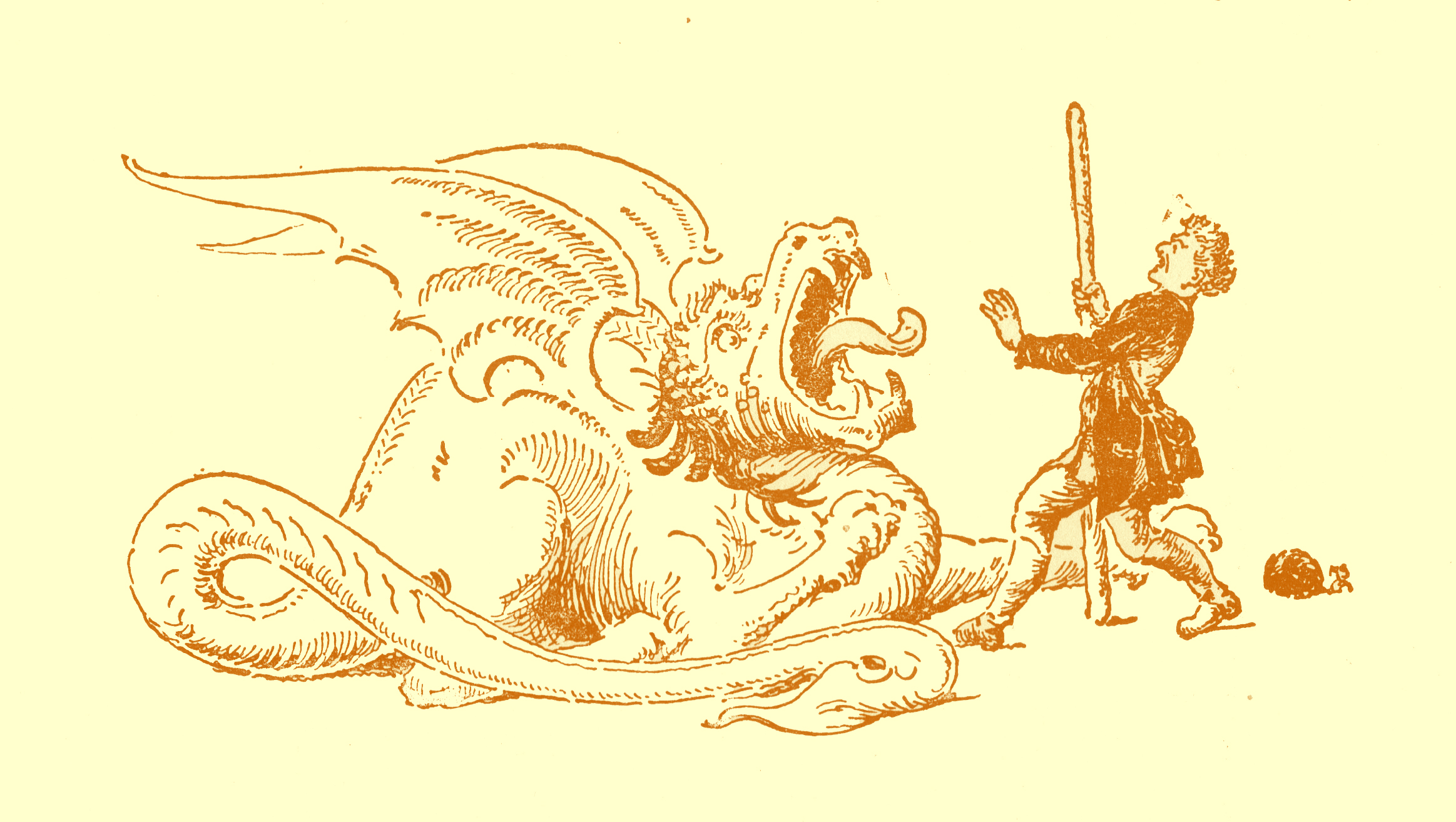 “Well, now I’m coming to eat you,” said the Dragon, who gaped wide, and wanted to swallow the man. But he begged again hard for his life.

But the Dragon said he must have a mouthful of 119 man’s meat; he was so hungry, he couldn’t bear it any longer.

“See, yonder comes one who looks as if he was sent to be a judge between us,” said the man, as he pointed to Reynard the fox, who came stealing between the stones of the heap.

“All good things are three,” said the man; “let me ask him, too, and if he gives doom like the others, eat me up on the spot.”

“Very well,” said the dragon. He, too, had heard that all good things were three, and so it should be a bargain. So the man talked to the fox as he had talked to the others.

“What will you give me if I free you from the Dragon?” he whispered into the man’s ear.

“You shall be free to come to my house, and to be lord and master over my hens and geese every Thursday night,” said the man.

“Well, my dear Dragon,” said Reynard, “this is a very hard nut to crack. I can’t get it into my head how you, who are so big and mighty a beast, could find room to lie under yon stone.”

“Can’t you?” said the Dragon; “well, I lay under the hill-side, and sunned myself, and down came a landslip, and hurled the stone over me.”

“All very likely, I dare say,” said Reynard; “but still I can’t understand it, and what’s more I won’t believe it till I see it.”

So the man said they had better prove it, and the 120 Dragon crawled down into his hole again; but in the twinkling of an eye they whipped out the lever, and down the stone crashed again on the Dragon.

“Lie now there till doomsday,” said the fox. “You would eat the man, would you, who saved your life?”

The Dragon groaned, and moaned, and begged hard to come out; but the two went their way and left him alone.

The very first Thursday night Reynard came to be lord and master over the hen-roost, and hid himself behind a great pile of wood hard by. When the maid went to feed the fowls, in stole Reynard. She neither saw nor heard anything of him; but her back was scarce turned before he has sucked blood enough for a week, and stuffed himself so that he couldn’t stir. So when she came again in the morning, there Reynard lay and snored, and slept in the morning sun, with all four legs stretched straight; and he was as sleek and round as a German sausage.

Away ran the lassie for the goody, and she came, and all the lasses with her, with sticks and brooms to beat Reynard; and to tell the truth, they nearly banged the life out of him; but, just as it was almost all over with him, and he thought his last hour was come, he found a hole in the floor, and so he crept out, and limped and hobbled off to the wood.