From Tales from the Fjeld, A Series of Popular Tales from the Norse of P. Ch. Asbjörnsen, A New Edition with more than a Hundred Illustrations by Moyr Smith, by Sir George Dasent, D.C.L; New York: G. P. Putnam’s Sons; (no date); pp. 108-115.

Death and the Doctor


ONCE on a time there was a lad who had lived as a servant a long time with a man of the North Country. This man was a master at ale-brewing; it was so out-of-the-way good the like of it was not to be found. So, when the lad was to leave his place and the man was to pay him the wages he had earned, he would take no other pay than a keg of Yule-ale. Well, he got it, and set off with it, and he carried it both far and long, but the longer he carried the keg the heavier it got, and so he began to look about to see if any one were coming with whom he might have a drink, that the ale might lessen and the keg lighten. And after a long, long time, he met an old man with a big beard.

“I’m looking after some one to drink with, and get my keg lightened,” said the lad.

“Can’t you drink as well with me as with any one else?” said the man. “I have fared both far and wide, and I am both tired and thirsty.”

“Thee will I not drink with,” said the lad; “for thou makest such distinction between persons here in the world, and sharest rights so unevenly that some get so rich and some so poor. No! with thee I will not drink,” and as he said this he trotted off with his keg again.

So when he had gone a bit farther the keg grew too heavy again; he thought he never could carry it any longer unless some one came with whom he might drink, and so lessen the ale in the keg. Yes! he met an ugly, scrawny man who came along fast and furious.

“Oh, I’m looking for some one to drink with, and get my keg lightened,” said the lad.

“Can’t you drink as well with me as with any one else?” said the man. “I have fared both far and wide, and I am tired and thirsty.”

“No!” said the lad; “thou only pinest and plaguest poor folk, and if there is any unhappiness astir, they always say it is thy fault. Thee I will not drink with.”

So he went far and farther than far again with his ale-keg on his back, till he thought it grew so heavy 110 there was no carrying it any farther. He began to look round again if any one were coming with whom he could drink and lighten his keg. So after a long, long time, another man came, and he was so dry and lean ’twas a wonder his bones hung together. 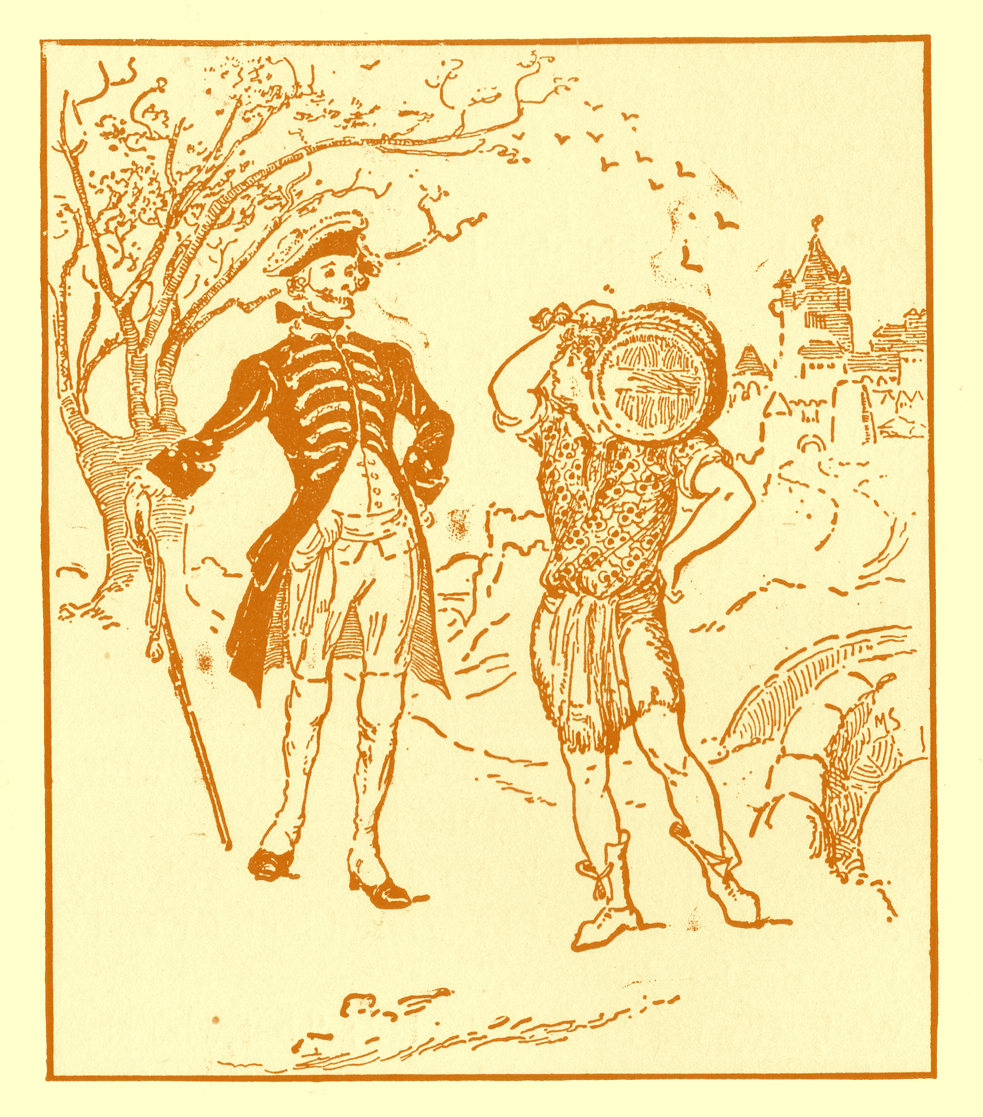 “Oh, I was only looking about to see if I could find 111 some one to drink with, that my keg might be lightened a little, it is so heavy to carry.”

“Can’t you drink as well with me as with any one else?” said the man.

“They call me Death,” said the man.

“The very man for my money,” said the lad. “Thee I am glad to drink with,” and as he said this he put down his keg, and began to tap the ale into a bowl. “Thou art an honest, trustworthy man, for thou treatest all alike, both rich and poor.”

At last Death said, “I have never known drink which smacked better, or did me so much good as this ale that you have given me, and I scarce know what to give you in return.” But, after he had thought awhile, he said the keg should never get empty, however much they drank out of it, and the ale that was in it should become a healing drink, by which the lad could make the sick whole again better than any doctor. And he also said that when the lad came into the sick man’s room, Death would always be there, and show himself to him, and it should be to him for a sure token if he saw Death at the foot of the bed that he could cure the sick with a draught from the keg; but if he sat by the pillow, there was no healing nor medicine, for then the sick belonged to Death.

Well, the lad soon grew famous, and was called in far and near, and he helped many to health again who had been given over. When he came in and saw how Death sat by the sick man’s bed, he foretold either life or death, and his foretelling was never wrong. He got both a rich and powerful man, and at last he was called in to a king’s daughter far, far away in the world. She was so dangerously ill no doctor thought he could do her any good, and so they promised him all that he cared either to ask or have if he would only save her life. 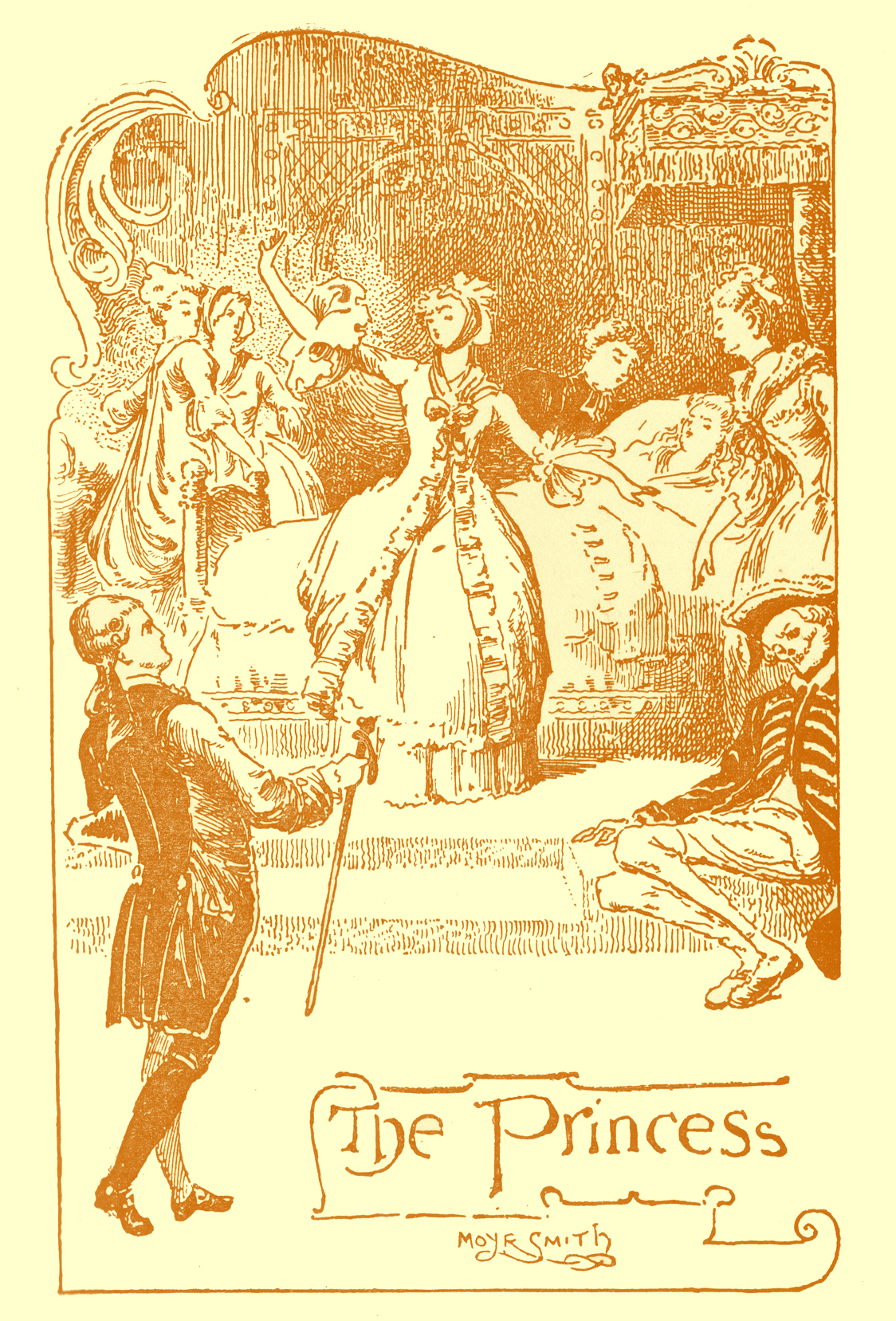 “There sat Death at her pillow. ”

Now, when he came into the princess’s room, there sat Death at her pillow; but as he sat he dozed and nodded, and while he did this she felt herself better.

But they said he must save her, if it cost land and realm. So he looked at Death, and while he sat there and dozed again, he made a sign to the servants to turn the bed round so quickly that Death was left sitting at the foot, and at the very moment they turned the bed, the doctor gave her the draught, and her life was saved.

“Now you have cheated me,” said Death, “and we are quits.”

“I was forced to do it,” said the doctor, “unless I wished to lose land and realm.”

“That shan’t help you much,” said Death; “your time is up, for now you belong to me.”

“Well,” said the lad, “what must be must be; but you’ll let me have time to read the Lord’s Prayer first?”

Yes, he might have leave to do that; but he took very good care not to read the Lord’s Prayer; everything else he read, but the Lord’s Prayer never crossed his lips, and at last he thought he had cheated Death for good and all. But when Death thought he had really waited too long, he went to the lad’s house one night, and hung up a great tablet with the Lord’s Prayer painted on it over against his bed. So when the lad woke in the morning he began to read the tablet, and did not quite see what he was about till he came to Amen; but then it was just too late, and Death had him.