A MAN was taking his little boy home through the jungle near the headwaters of the Lĕbih River in the interior of Kĕlántan, when they were overtaken by night. The boy was frightened and said to his father, “Father, I am so frightened, let me sleep in the middle.” The father replied, “How can you sleep in the middle seeing there are but two of us?” Nevertheless the boy replied, “Father, I must sleep in the middle”; and the father to pacify him took the boy’s head in his lap, and they went to sleep together on the bank of the river. Now Rīmau the Tiger came that way and beheld a man with four arms and four legs and only a single head. Rīmau was astonished at this, and went to Buáya the Old Crocodile in the bight and said, “Friend Buáya, there is a human being asleep on the bank who has four arms and four legs and only a single 23 head.” At this old Buáya laughed consumedly and said, “What nonsense is this? Go and snuff round about the body and you will soon find it has two heads rather than one. Whatever you seize shall be your portion, but whatever plunges into the river (to escape) shall be mine.”

So Rīmau went back to snuff round the body, and as he was snuffing his whiskers tickled the man’s nostrils and the man sneezed very violently. 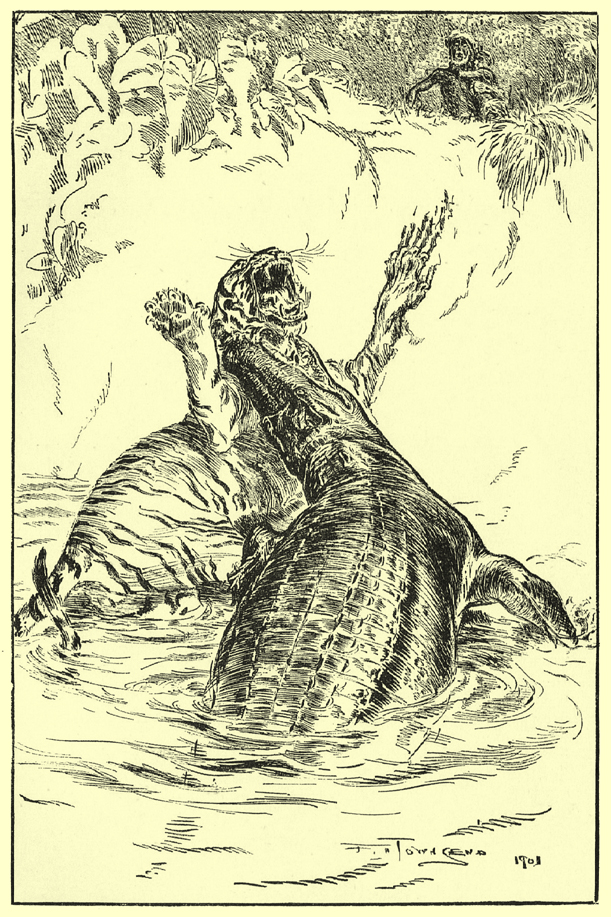 VI.  “Rímau being startled leaped backwards and fell into the river, where he was himself devoured by the Crocodile according to his compact.”

And at this Rímau being startled leaped backwards and fell into the river, where he was himself devoured by the Crocodile according to his compact.

a  The Tiger’s mistake.

This is one of the Tĕmbĕling Stories, and was told me as having happened on the very spot (upon the banks of the Lĕbih 79 River) on which I was one night encamped. The spot was a small point of land jutting out into the stream of the Lĕbih which swirled angrily past, chafing at the steep bank which here disputed its passage. It was surrounded by a dense wall of jungle and it appeared just the place to expect a tiger, although it may be open to question whether crocodiles are ever met so far up-stream and above so many rapids.