From Fables & Folk-Tales from an Eastern Forest, Collected and Translated by Walter Skeat, M.A., Illustrated by F. H. Townsend; Cambridge: At the University Press; 1901; pp. 41-48, 81.


THE ELEPHANT HAS A BET WITH THE TIGER.a

IN the beginning Gājah the Elephant and Rīmau the Tiger were sworn friends. But one day they came to a clearing and presently encountered Lōtong, the long-tailed Spectacle-monkey. And when he saw the Monkey the Elephant said, “Mr. Lōtong yonder is far too noisy; let us try and shake him off; if he falls to me I am to eat you; and if he falls to you, you are to eat me — we will make a wager of it.” The Tiger said, “Agreed?” and the Elephant replied, “Agreed.” “Very well!” said the Tiger; “you shall try and menace him first.” So the Elephant tried to menace the Monkey. “AU! AU! AU!” he trumpeted, and each time he trumpeted the Monkey was scared. But the Monkey went jumping head foremost 42 through the branches and never fell to the ground at all.

Presently, therefore, the Tiger asked the Elephant, “Well, Friend Elephant, would you like to try your luck again?” But the Elephant said, “No, thank you. It shall be your turn now; and if he falls to you, you shall eat me — if you really can make him fall!” Then the Tiger went and roared his longest and loudest, and shortened his body as for a spring and growled and menace the Monkey thrice. And the Monkey leaped and fell at the Tiger’s feet, for his feet and hands were paralysed and would not grip the branches any more. Then the Tiger said, “Well, Friend Elephant, I suppose I may eat you now.” But the Elephant said, “You have, I admit, won the wager; but I beg you to grant me just seven days’ respite, to enable me to visit my wife and children and to make my will.” The Tiger granted the request, and the Elephant went home, bellowing and sobbing every foot of the way.

Now the Elephant’s wife heard the sound of her husband’s voice, and said to her children, “What can be the matter with your Father that he keeps 43 sobbing so?” And the children listened to make sure and said, “Yes, it really is Father’s voice, the sobbing, and not that of anybody else.” Presently Father Elephant arrived, and Mother Elephant asked, “What were you sobbing for, Father? What have you done to yourself?” Father Elephant replied, “I made a wager with Friend Tiger about shaking down a Monkey, and Friend Tiger beat me; I menaced the Monkey, but he did not fall; if he had fallen to me, I was to have eaten Friend Tiger but if he fell to Friend Tiger, Friend Tiger was to eat me. I was beaten, and now Friend tiger says he is going to eat me. So I begged leave to come home and see you, and he has given me just seven days’ respite.”

Now for the seven days Father Elephant kept sobbing aloud, and neither ate not slept. And the thing came to the hearing of Friend Mouse-deer. “What can be the matter with Friend Elephant that he keeps bellowing and bellowing, neither does he sleep, so that night is turned into day, and day into night? What on earth is the matter with him? Suppose I go and 44 see” (said the Mouse-deer). Then the Mouse-deer went to see what was wrong, and asked, “What is the matter with you, Friend Elephant, that we hear you bellowing and bellowing every single day and every single night, just now, too, when the Rains are upon us? You are far too noisy.”

But the Elephant said, “It is no mere empty noise, Friend Mouse-deer, I have got into a dreadful scrape.” “What sort of a scrape?” enquired the Mouse-deer. “I made a wager with Friend Tiger about shaking down a Monkey, and he beat me.” “What was the stake?” asked the Mouse-deer. “The stake was that Friend Tiger might eat me if Friend Tiger frightened it down; and if I frightened it down, I might eat Friend Tiger. It fell to Friend Tiger, and now Friend Tiger wants to eat me. Any my reason for not eating or sleeping any more is that I have got only just seven days’ respite to go home and visit my wife and children and to make my will.” Then the Mouse-deer said, “If it came to Friend Tiger’s eating you, I should feel exceedingly sorrowful, exceedingly distressed: but things being only as you say, I feel neither.” “If you will assist 45 me, I will become your slave, and my descendants shall be your slaves for ever.” “Very well, if that is the case, I will assist you,” said the Mouse-deer. “Go and look for a jar-full of molasses.” Friend Elephant promised to do so, and went to look for it at the house of a maker of Palm-wine.b The owner of the house fled for his life, and the jar fell into Friend Elephant’s possession, who bore it back to the Mouse-deer.

Then Friend Mouse-deer said, “When does your promise expire?” and Friend Elephant replied, “To-morrow.” So when next morning arrived they started, and the Mouse-deer said, “Now pour the molasses over your back and let it spread and spread and run down your legs.” Friend Elephant did as he was ordered. Friend Mouse-deer then instructed the Elephant as follows: “As soon as I begin to lick up the molasses on your back, bellow as loud as you can and make believe to be hurt, and writhe and wriggle this way and that.”

IX.  “And Friend Elephant writhed and wriggled and made believe to be hurt, and made a prodigious noise of trumpeting.”

Now when Friend Tiger heard these words of the Mouse-deer, he said to himself, “So I suppose if you catch me, you’ll eat me into the bargain, will you?” And Friend Tiger stayed not a moment longer, but fled for his life, fetching very lofty bounds.

And soon he met with the Black Ape, and Friend Ape asked, “Why running so hard, Friend Tiger? Why so much noise, and why, just when the Rains are upon us, too, do you go fetching such lofty bounds?” Friend Tiger replied, “What do you mean by ‘so much noise’? What was the Thing that was got upon Friend Elephant’s back, that had caught Friend Elephant and was devouring him so that he went writhing and wriggling for the pain of it, and the blood went streaming 47 down in floods? Moreover the Thing that was got on Friend Elephant’s back said, to my hearing, that a single Elephant was very short commons: but if It could catch a fat old Tiger like myself that would be just enough to satisfy Its hunger.” Friend Ape said, “What was that Thing, Friend Tiger?” “I don’t know,” said the Tiger. “Ah,” mused the Ape, “I wonder if it could be Friend Mouse-deer!” “Certainly not,” said the Tiger; “why, how in the world could Friend Mouse-deer swallow Me ?  To say nothing of his not being used to meat food” (said he). “Come and let us go back again.”

Then they went back again to find the Elephant, and first the Ape went the faster, and then the Tiger went the faster, and then the Ape got in front again. But Friend Mouse-deer sitting on Friend Elephant’s back saw them coming and shouted, “Hullo, Father Ape” (said he), “this is a dog’s trick indeed; you promise to bring me two tigers and you only bring me one. I refuse to accept it, Father Ape.”

Now when Friend Tiger heard this, he ran off at first as fast as he could, but presently he 48 slackened his pace and said, “It is too bad of you, Friend Ape, for trying to cozen me, in order to pay your own debts. For shame! Father Ape! It was only through good luck that he refused to accept me; if he had accepted, I should have been dead and done with. So now, if you come down to the ground, you shall die the death yourself, just for your trying to cheat me.” Thus the Tiger and the Ape were set at enmity, and to this day the Tiger is very wroth with the Ape for trying to cheat him. And here the story ends. 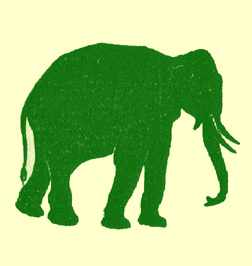 a  The Elephant’s bet.

This story was told me by Che Busu, the Kĕlantan Malay already referred to.

b  went to look for it at the house of a maker of palm-wine.  Palm-wine or toddy is made by tapping the big fleshy flower-shoot (axis) of the coconut palm; the sap is run off into short bamboo vessels and allowed to ferment (when required for drinking purposes) or boiled down to make a kind of molasses or palm-sugar as required.