MANY of our Parish Churches bear, in their architectural details, traces of customs and usages which, though general in early times, have, in the course of centuries, not only become obsolete, but their exact character is now wholly unknown. For example, low side-windows are still a subject for controversy among well-known antiquaries, and several niches and squints still remain, the exact use of which have baffled some of our most learned authorities upon sacred archæology. To these may be added the gargoyles which abound on the exterior, and the curiously carved grotesque figures which often disfigure the interior of many of our village churches. A remarkable example of this is to be found in what is now a remote village, though possessing a charter for a weekly market, granted by Queen Elizabeth. The church is that of Smarden, situate in the Weald of Kent, about nine miles from Ashford. Here, in this remarkable church (dedicated to S. Michael), 202 popularly known as the “Barn of Kent” (from the singular construction of its wide roof without side aisles or tie beams), is found a Grotesque Head, in the north wall of the nave, near the eastern end at about eight feet from the ground. 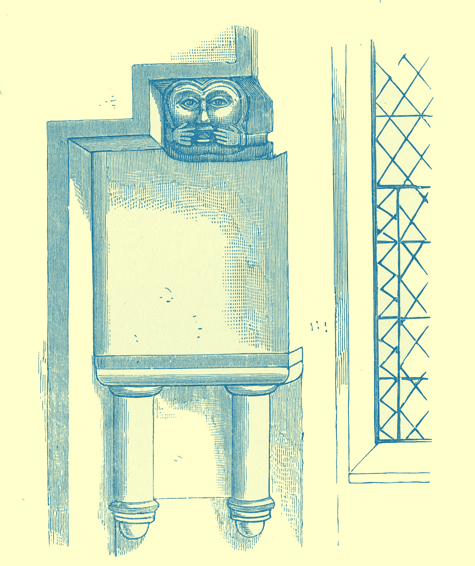 It is supported by two corbels of early character, and the figure, though without shoulders, has hands distending the mouth. On the arms are bracelets. The material of which it is carved is Bethersden marble, a stone found in the locality, which takes an excellent polish, and on this account the fonts in several neighbouring parishes are formed of it. The use of this curious head, which cannot be described as comical, is open to conjecture, as to whether it was in some way connected with the mediæval superstitions in regard to exorcism, gargoyles on the exterior of churches being known to have such reference. There are no other figures of a similar nature in any part of the church; and in this particular spot it certainly could not have been introduced by way of ornament, as the monster is hideous in the extreme. Another suggestion has been offered, namely, that it had some connection with the Easter and Whitsun ales. Those who favour this theory quote as an example the figure on the porch of Chalk Church, Kent, 203 which is supposed to illustrate the humours of a church ale. Then again, these church ales afford matter for speculation, but very little seems to be really known about them. Popular belief goes to show that in pre-Reformation times the church then, as in our own days, was constantly requiring funds, and these were partly raised by the sale of ale, then the common English beverage, just as 204 money is obtained in this nineteenth century by selling tea at the refreshment stalls, so general at the bazaars held for charitable purposes. An engraving of the grotesque head is given in the “Memorials of Smarden,” which we reproduce.

Our thanks are due to the writer of the foregoing notes for the loan of the illustration used in this chapter.