IT is not often that we can trace back so old and wide-spread a custom as the observance of wakes to its origin. A letter from Pope Gregory to the Abbot Melito in 601, seems, however, to give us the commencement of the history of them in England. “The idol temples are not to be destroyed,” he says, “but let the idols in them be destroyed. Let holy water be blessed and sprinkled in these temples; let altars be built and relics be placed there: and since they are accustomed to slay many oxen in sacrifice to demons, let them, on the anniversary of the dedication, or on the birthdays (i.e., the days of the martyrdom) of the holy martyrs, construct booths around those churches which were formerly temples, and celebrate the solemnity with religious festivity.” The name wake, in Old English waec, is equivalent to vigil, and arose from the custom of reckoning church festivals, from sunset to sunset, the night being largely spent in early times in watching and prayer.

The custom thus begun for religious purposes 98 soon developed a distinctly secular side. In the case especially of churches dedicated in the name of some more than usually popular saint the people, not only of that parish, but from all the countryside, flocked to the festival. Itinerant vendors of wares, large and small, found that the concourse gave them an excellent opportunity for trade; and those who could “turn an honest penny” by catering for the amusement of the public were not less quick in seizing the occasion.

The religious services of the festival were not forgotten or omitted, but the business and jollification of the time became such prominent features of the wake as to largely obscure its sacred aspect, and to call frequently for measures of restraint. So early as King Edgar’s reign a Canon was enacted warning the people not to spend in drunkenness and debauchery the season specially designed for devotion and prayer. Othobon, the Papal legate, issued certain Constitutions in 1268, one of which forbade the setting out of stalls for merchandise within the walls of the Church, from which we may judge how far the business side of the wake had intruded upon the devotional. An Act of Edward I. (13, Edw. I., c. 6) goes further, by forbidding fairs and markets to be held in 99 churchyards. In Scotland, too, measures had to be taken to secure decency of behaviour at these gatherings. The Provincial Synod enacted in 1225 that “dances and games which engender lasciviousness be not performed in churches and churchyards,” and also that “wrestling matches or sports be not suffered to take place there upon any of the festivals.” In 1448, Henry VI. forbade any fairs to be held or merchandise to be displayed on the great festivals of the Christian year. 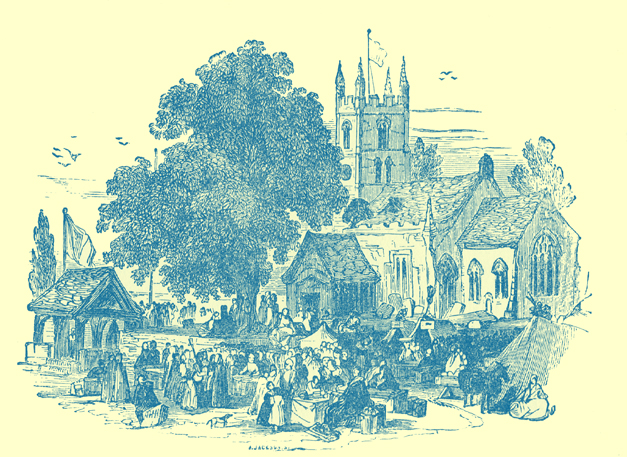 By these means some of the more unseemly customs, which at one time accompanied the 100 wakes, were cut off, and the sacred enclosure of the churchyard, and still more of the church itself, was defended to a great extent from profane uses; but even this was not easily achieved. So late as 1571, we find Grindal, Archbishop of York, in Injunctions issued to the laity of the Northern Province, ordering “that the minister and churchwardens shall not suffer any lords of misrule, or summer lords or ladies, or any disguised persons or others in Christmas or at May games, or any minstrels, morrice-dancers, or others, at rushbearings, or at any other time to come unreverently into any church or chapel or churchyard, and there dance, or play any unseemly parts with scoffs, jests, wanton gestures, or ribald talk, namely in the time of divine service, or of any sermon.” The conclusion of the paragraph is curiously worded, since it is obviously not intended that these things were allowable in church at other times.

The rushbearing, mentioned in this Injunction, is practically the same as the wake, the gathering and bringing of rushes wherewith to strew the floor of the churches, being one of the details preliminary to the celebration of the annual parish feast.

Kept, as far as possible, beyond the bounds of holy ground, the village carnival lived on from year to year; surrounded with much of the rough jocularity, both in word and deed, which characterized the bygone time, but nevertheless not without its pleasing features. There was much meeting of ancient gossips, many a gathering of life-long friends around the cottage hearth, or beneath the sheltering elms of God’s Acre.

“And all the village train, from labour free,
Let up their sports beneath the spreading tree,
While many a pastime circled in the shade,
The young contending, while the old surveyed;
And many a gambol frolicked o’er the ground,
And sleights of art, and feats of strength went round.”

In time, however, as “Merrie England” was changed more and more each succeeding generation into “Busy England,” the multiplicity of these holidays was felt to be somewhat of a grievance, and an attempt was made to meet the case by ordering that all dedication festivals throughout the country should be celebrated on one day, namely on the first Sunday in October. This was enacted by Convocation in 1536, with the result, not that the wakes were transferred, but that many of them dropped out of observance. The village feast, however, still lives in many 102 districts, and many fairs also keep alive the memory of the wake of earlier days; the feast-day of the patron saint of the parish, the patronal rather than the dedication festival, being the day with which they are usually connected. With the usual conservatism of the rustic mind, however, the country-folk have in many, perhaps in most instances, declined to accept the alteration of the Calendar in 1752, so that the actual observance of the Saint’s Day, and the parish feast or fair, are now frequently eleven days apart.

In the old times, when travelling was difficult and expensive for the rich, and well-nigh impossible for the poor, all that the peasant or the artisan saw of life, beyond the monotonous round of his daily toil, was at the wake. “There were, at these times,” as we gather from King James I.’s Declaration concerning Lawfull Sports, “dancing either of men or women, archery for men, leaping, vaulting, and other such harmless recreation,” as well as the “carrying rushes to the church for the decoring of it, according to old customs.” All such amusements Charles I., in reissuing his father’s declaration, asserts to be right and proper at the feast of the “dedication of churches, commonly called wakes.” But besides these, 103 interludes, plays, and masques were performed for the entertainment of the crowd. Thomas Heywood, in an Apology for Actors, published in `1612, asserts that “in divers places of England there be towns that hold the privilege of their fairs and other charters by yearly stage-plays, as at Manningtree, in Suffolk, Kendall in the north, and others.” In Manchester, at the wake, the pageant of Robin Hood, Maid Marion, and Friar Tuck was exhibited, and that too, it is said, within the church, the priests organizing it, and the churchwardens making themselves responsible for the expenses. Mediæval England was fond of dramatic displays. The mummers, morrice-dancers, plough-jacks, and other ministers of harmless revelry were all more or less histrionic in their performances, and pageants and miracle-plays were performed in many places with an elaboration and costliness that seem to us remarkable.

More objectionable were the cruel games too often introduced, such as bull or bear-baiting, cock-fighting, and such like; and these, in spite of the better views of our duties towards the brute creation, which unquestionably prevail to-day, lived on in some places till comparatively recent 104 times. Bulls and bears were baited at Eccles, where was held one of the most famous wakes in the country, until the year 1834, and cock-fighting was also a popular sport there.

In recent years, with the revived regard for the Holy Days of the Church, Saints’ Days are far better observed than was recently the case, and attempts have been made in several cases to emphasize the recurrence of the patronal feast-day of the parish, by organizing rural sports, cricket matches, and so on. If we can attain something of the realization of the “parochial family” once more, as it was felt at the old wakes, when old and young, rich and poor, met together for the common purpose, first of worship, and then of harmless recreation, and at the same learn by experiences to avoid the excesses of former days, we shall have done something towards the revival of Merrie England.