HATS are worn by male worshippers in the synagogues of the Jews, but in the churches and chapels of Christendom it is considered irreverent to wear the hat during Divine service. Every now and again, however, we hear of an eccentric descendant of George Fox wearing his hat in church, in defiance of ecclesiastical custom and authority. On several occasions Samuel Fox has been ejected from places of worship for refusing to remove his hat; but in Cornwall recently a conciliatory vicar contented himself with addressing a mild remonstrance to him, and then, as Fox declined to remove his headgear, the service was proceeded with.

Here is a picture of George Fox, the founder of the Quakers, wearing his hat in church. This old fighter for the Faith wore his hat in church for a far different reason from that of his eccentric descendant to-day. When George Fox attended the services of the Church of England, he put on 89 his hat to mark disapproval of anything that was said by the officiating clergyman, and kept it there until his approval was gained. If, however, the sermon of the unfortunate clergyman did not please him he would slowly rise and walk out of church. 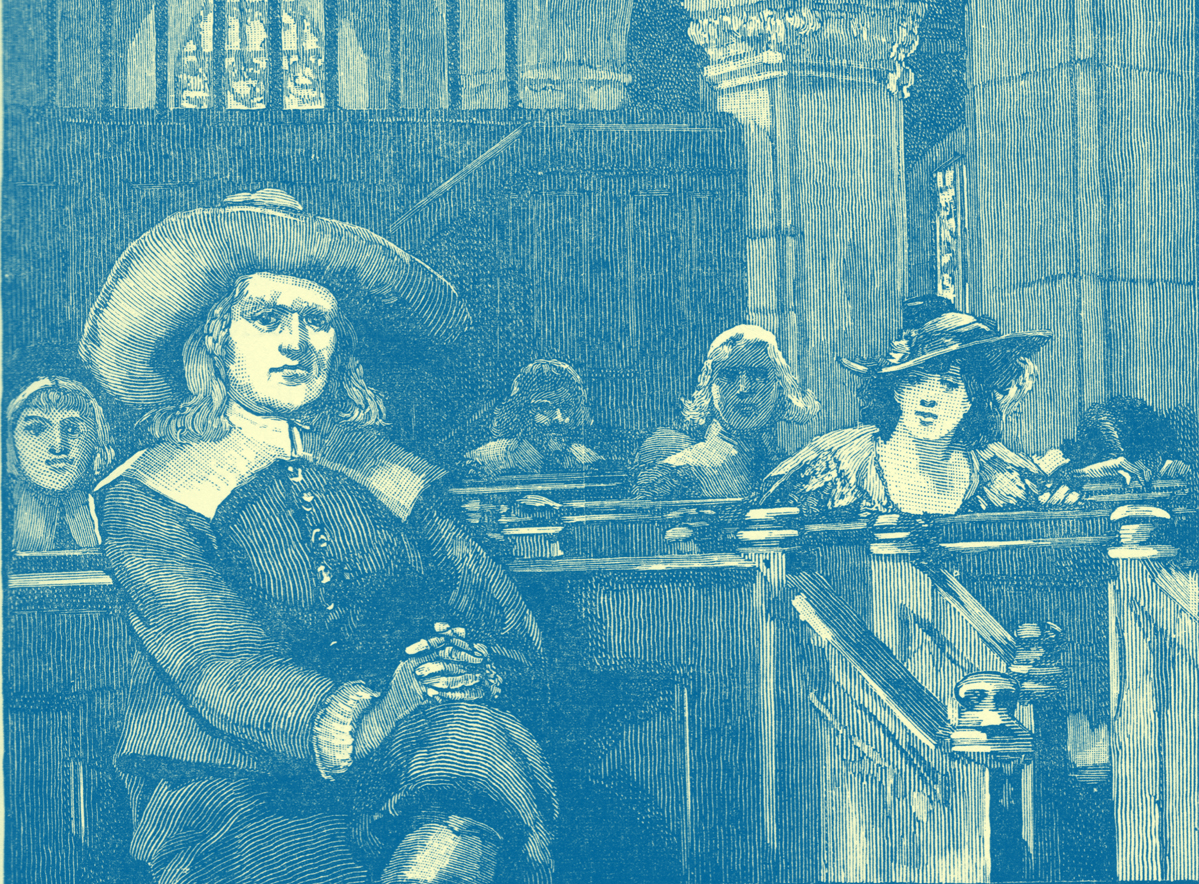 In the olden time much irreverence prevailed in church. In the latter part of the sixteenth and the commencement of the seventeenth century it was the general custom to wear hats in church during Divine service. A section of the churchgoers 90 Strongly disapproved of the practice, and for many years an incessant warfare was waged against it.

Old pictures show us clergymen preaching with their hats on, and in Foxe’s “Acts and Monuments” there is a representation of Dr. Cole preaching at St. Mary’s, Oxford, with an outdoor cap on, whilst several of the clergy are similarly bonnetted.

Queen Elizabeth was not apparently very strict in this respect, for we have it that on a visit to Cambridge in the year 1564 she sent one of the attendants to the preacher — who had not worn his hat out of respect to the Queen — to inform him that he might wear his hat. This he did till the end of the sermon.

The Rev. James Rowlanson, B.D., a noted preacher in his day, denounces wearing the hat in church in a sermon preached in 1620 at the consecration of Pear-tree church, Southampton. “How unmannerly,” said the preacher, “are a many that carry themselves with more lowlinesse in a Gentleman’s Hall (for there they will uncouer) then in the House of God? A French fashion, indeed, but very ill-fauored, though it be naturalized amongst the most, and growne 91 English euen in our greatest congregations, where the apprentice that stands bare-headed all the weeke long in his master’s shop, must need have his hat on in the church. Grant it an indulgence to the aged and the weake, who yet to testifie reuerence might put off hats, and to confesse a weaknesse, might keep heads warme enough with some other fit and graue covering. But what priuiledge, but pride and wantonesse can be alledged for the strong and healthfull in times and places of no extremity of cold? I may say of it, as Tacitus speaks of astrologie, ‘semper vetabitur, semper retinebitur’; there is little hope redresse, yet still it desueres (mee thinkes) to be rebuked.”

As showing how feeling amongst the clerics was growing against the custom, the vicar of St. Giles-in-the-Fields reproved two earls who wore their hats in church. Indignant and annoyed, the nobles lodged a complaint with the Archbishop. The reply of the leading ecclesiastic was a corroboration of the original reproof, for he said: — “The preacher has been very diligent for a long time to bring his parishioners to a decency of behaviour in the church.”

In 1662 Bishop Cosin, after visiting Durham 92 Cathedral, wrote: — “Some come into the quire in their furre and night-gowns, and sit with their hats on their heads at the reading of the lessons.”

The “Roundheads” or “Puritans” kept up the custom in the middle of the seventeenth century. In the “Calendar of State Papers” (Domestic) there appears one written for the Episcopal Palace, Gloucester, in 1639. Referring to Alderman Pury, who desired to represent the city in Parliament, it stated: — “Old Pury, some time a weaver, and now an attorney, shows his irreverence in God’s house, sitting covered when all the rest sit bare.”

William of Orange (William III.) caused great offence by wearing his hat in church in 1689. He would sometimes uncover during the reading of the Liturgy, but on the commencement of the sermon he put on his hat.

At Scarborough and other places in the North of England a curious funeral custom prevailed. During the service the male relatives present sat close around the coffin with their hats on. The Rev. J. C. Atkinson, in his “Forty Years in a Moorland Parish” (London, 1891), tells us that the custom was stopped many years ago by a new vicar, whose high-handed manner gave much 93 offence. Mr. Atkinson also gives some interesting notes about Quakers wearing hats at funerals. “Sometimes,” he says, “I have seen them, as I went out in advance of the coffin into the graveyard, sitting in the church porch. But not once or twice only have I seen them come inside the church and sit the service through — hatted, as a matter of course.” The reverend gentleman also states that he was never intolerant enough to order the Quakers to remove their hats, as he was glad to see them paying their tribute of regard, and would do anything rather than lessen “good feeling, either general or particular.