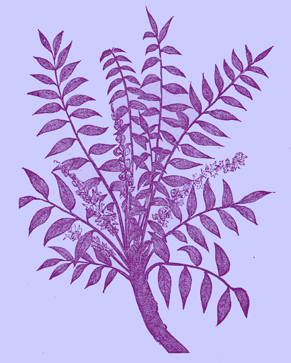 
Frankincense, or gum olibanum, is a brittle resin of yellowish hue, and a bitter and nauseous taste. When burnt, it diffuses an agreeable odor. The frankincense is obtained from a tree found in India, called boswellia, and also from a tree found in Arabia and Syria, the precise species of which is 320 not known. As a perfume, it has been greatly esteemed in Eastern countries. The burning of frankincense constituted a part of the daily service of the ancient Jewish church. The priests drew lots to know who should offer it. The person on whom the lot fell took a large silver dish, in which was a censer full of incense, and being accompanied by another priest carrying some live coals from the altar, went into the temple. There, in order to five notice to the people, they struck upon an instrument of brass placed between the temple and the altar; and being returned to the alter, he who brought the fire left it there, and went away. The quantity of incense offered each day was half a pound in the morning, and as much in the evening. One reason of the continual burning of incense might be, that the numerous victims which were continually offered up would have made the temple as offensive as a slaughter-house, and consequently would have filled the worshippers with disgust rather than with awe and reverence, had not the smell been overpowered by the agreeable fragrance of this perfume.

Frankincense was also used in immense quantities in the sacrifices of the ancient temples. At the present day, the Roman Catholics perfume their churches and altars with it. Its chief use, however, in modern times, is as a medicine.

The frankincense gum is obtained from incisions made in the trees during the heat of the summer.