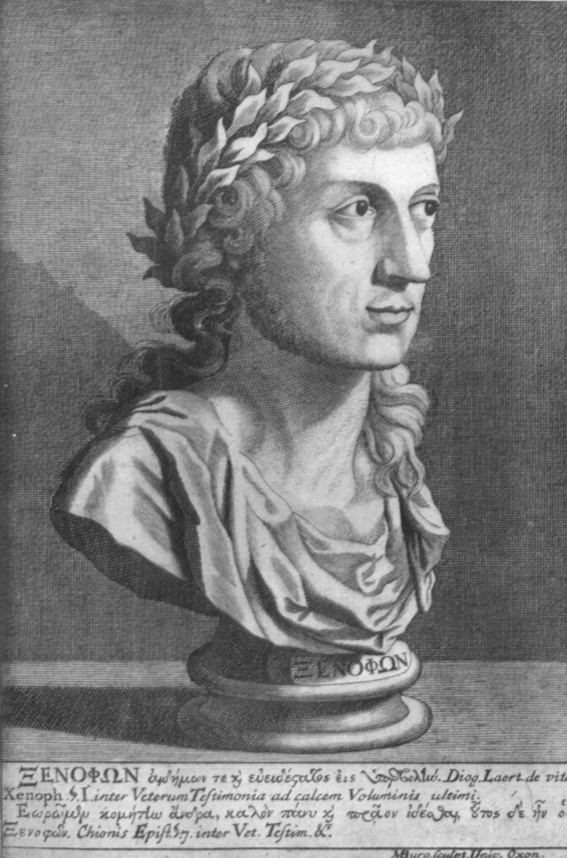 XENOPHON, a famous Grecian soldier and historian; born at Athens, probably about 431 B. C.; died, probably at Corinth, about 341 B. C. He was of good family, and became in youth a pupil of Socrates, and took down notes of his talk, which he long afterward wrote out in “Memorabilia of Socrates.” Xenophon grew up to manhood during the long Peloponnesian War. That over, at about thirty he joined the Greek “Ten Thousand,” who aided Cyrus “the Younger” in his disastrous attempt to wrest the Persian sceptre from the hands of his elder brother Artaxerxes. The story of this expedition, occupying a space of just two years, is told in the “Anabasis” of Xenophon, by far the most important of his works. He subsequently took up his residence at Scillus, a little town of Elis, under Spartan protection, where he lived for some forty years. Fifteen works were composed by Xenophon, all of which are still extant. They comprise the Anabasis,” the “Cyropædia,” the “Memorabilia,” the “Hellenics,” and small essays on domestic economy, hunting, horsemanship, and the like.

FORT OF THE TAOCHI STORMED.

1.  FROM hence the Greeks marched five days’ journey, thirty parasangs, to the country of the Taochi, where provisions began to fail them; for the Taochi inhabited strong fastnesses, in which they had laid up all their supplies.  2.  Having at length, however, arrived at one place which had no city or houses attached to it, but in which men and women and a great number of cattle were assembled, Cheirisophus, as soon as he came before it, made it the object of an attack; and when the first division that assailed it began to be tired, another succeeded, and then another; for it was not possible for them to surround it in a body, as there was a river about it.  3.  When Xenophon came up with his rear-guard, peltasts, and heavy-armed men, Cheirisophus exclaimed, “You come 11238 seasonably, for we must take this place, as there are no provisions for the army, unless we take it.”

4.  They then deliberated together, and Xenophon asking what hindered them from taking the place, Cheirisophus replied, “The only approach to it is the one which you see; but when any of our men attempt to pass along it, the enemy roll down stones over yonder impending rock, and whoever is struck, is treated as you behold;” and he pointed, at the same moment, to some of the men who had had their legs and ribs broken.  5.  “But if they expend all their stones,” rejoined Xenophon, “is there anything else to prevent us from advancing? For we see, in front of us, only a few men, and but two or three of them armed.  6.  The space, too, through which we have to pass under exposure to the stones, is, as you see, only about a hundred and fifty feet in length; and of this about a hundred feet is covered with large pine trees in groups, against which if the men place themselves, what would they suffer either from the flying stones or the rolling ones? The remaining part of the space is not above fifty feet, over which, when the stones cease, we must pass at a running pace.”  7.  “But,” said Cheirisophus, “the instant we offer to go to the part covered with trees, the stones fly in great numbers.” “That,” cried Xenophon, “would be the very thing we want, for thus they will exhaust their stones the sooner. Let us then advance, if we can, to the point whence we shall have but a short way to run, and from which we may, if we please, easily retreat.”

8.  Cheirisophus and Xenophon, with Callimachus of Parrhasia, one of the captains, who had that day the lead of all the other captains of the rear-guard, then went forward, all the rest of the captains remaining out of danger. Next, about seventy of the men advanced under the trees, not in a body, but one by one, each sheltering himself as he could.  9.  Agasias of Stymphalus, and Aristonymus of Methydria, who were also captains of the rear-guard, with some others, were at the same time standing behind, without the trees, for it was not safe for more than one company to stand under them.  10.  Callimachus then adopted the following stratagem: he ran forward two or three paces from the tree under which he was sheltered, and when the stones began to be hurled, hastily drew back; and at each of his sallies more than ten cartloads of stones were spent.  11.  Agasias, observing what Callimachus 11239 was doing, and that the eyes of the whole army were upon him, and fearing that he himself might not be the first to enter the place, began to advance alone, (neither calling to Aristonymus who was next him, nor to Eurylochus of Lusia, both of whom were his intimate friends, nor to an other person,) and passed by all the rest.  12.  Callimachus, seeing him rushing by, caught hold of the rim of his shield, and at that moment Aristonymus of Methydria ran past them both, and after him Eurylochus of Lusia, for all these sought distinction for valor, and were rivals to one another; and thus, in mutual emulation, they got possession of the place, for when they had once rushed in, not a stone was hurled from above.  13.  But a dreadful spectacle was then to be seen; for the women, flinging their children over the precipice, threw themselves after them; and the men followed their example. Æneas of Stymphalus, a captain, seeing one of them, who had on a rich garment, running to throw himself over, caught hold of it with intent to stop him.  14.  But the man dragged him forward, and they both went rolling down the rocks together, and were killed. Thus very few prisoners were taken, but a great number or oxen, asses, and sheep.

15.  Hence they advanced, seven days’ journey, a distance of fifty parasangs, through the country of the Chalybes. These were the most warlike people of all that they passed through, and came to close combat with them. They had linen cuirasses, reaching down to the groin, and, instead of skirts, thick cords twisted.  16.  They had also greaves and helmets, and at their girdles a short faulchion, as large as a Spartan crooked dagger, with which they cut the throats of all whom they could master, and then, cutting off their heads, carried them away with them. They sang and danced when the enemy were likely to see them. They carried also a spear of about fifteen cubits in length, having one spike.  17.  They stayed in their villages till the Greeks had passed by, when they pursued and perpetually harassed them. They had their dwellings in strong places, in which they had also laid up their provisions, so that the Greeks could get nothing from that country, but lived upon the cattle which they had taken from the Taochi.

18.  The Greeks next arrived at the river Harpasus, the breadth of which was four plethra. Hence they proceeded through the territory of the Scythini, four days’ journey, making 11240 twenty parasangs, over a level tract, until they came to some villages, in which they halted three days, and collected provisions.  19.  From this place they advanced four days’ journey, twenty parasangs, to a large, rich, and populous city, called Gymnias, from which the governor of the country sent the Greeks a guide, to conduct them through a region at war with his own people.  20.  The guide, when he came, said that he would take them in five days to a place whence they should see the sea; if not, he would consent to be put to death. When, as he proceeded, he entered the country of their enemies, he exhorted them to burn and lay waste the lands; whence it was evident that he had come for this very purpose, and not from any good will to the Greeks.  21.  On the fifth day they came to the mountain; and the name of it was Theches. When the men who were in the front had mounted the height, and looked down upon the sea, a great shout proceeded from them;  22.  and Xenophon and the rear-guard, on hearing it, thought that some new enemies were assailing the front, for in the rear, too, the people from the country that they had burnt were following them, and the rear-guard, by placing an ambuscade, had killed some, and taken others prisoners, and had captured about twenty shields made of raw ox-hides with the hair on.  23.  But as the noise still increased, and drew nearer, and as those who came up from time to time kept running at full speed to join those who were continually shouting, the cries becoming louder as the men became more numerous, it appeared to Xenophon that it must be something of very great moment.  24.  Mounting his horse, therefore, and taking with him Lycius and the cavalry, he hastened forward to give aid, when presently they heard the soldiers shouting, “The sea, the sea!” and cheering on one another. They then all began to run, the rear-guard as well as the rest, and the baggage-cattle and horses were put to their speed;  25.  and when they had all arrived at the top, the men embraced one another, and their generals and captains, with tears in their eyes. Suddenly, whoever it was that suggested it, the soldiers brought stones, and raised a large mound,  26.  on which they laid a number of raw ox-hides, staves, and shields taken from the enemy. The shields the guide himself hacked in pieces, and exhorted the rest to do the same.  27.  Soon after, the Greeks sent away the guide, giving him presents from the common stock, a horse, a silver cup, a Persian robe, 11241 and ten darics; but he showed most desire for the rings on their fingers, and obtained many of them from the soldiers. Having then pointed out to them a village where they might take up their quarters, and the road by which they were to proceed to the Macrones, when the evening came on he departed, pursuing his way during the night.