WIRT, WILLIAM, an American lawyer, patriot, and orator; born at Bladensburg, Maryland, November 8, 1772, died at Washington D. C., February I, 1834. His father was from Switzerland, his mother a German. He was educated in neighboring classical schools, studied law, was admitted to the bar of Virginia in 1792, and practised in several places, finally in Richmond. He was a member of the House of Delegates, and United states Attorney for Virginia. From 1817 to 1829 he was United States Attorney-General. In 1829 he removed to Baltimore, and in 1832 was nominated for President of the United States by the Anti-Masons. His most famous speeches are those as counsel for the Government against Aaron Burr. He published “Letters of a British Spy” (1803) — in the character of a travelling Englishman; “The Rainbow,” consisting of essays from the “Richmond Enquirer;” the two arguments in the Burr trial; a number of “Addresses,” and “The Life of Patrick Henry” (1817). He was co-author with George Tucker and others of a series of essays published collectively in 1812 under the title “The Old Bachelor.” His “Life” was written by J. P. Kennedy (1849).

(From “Speech in Kennedy’s Memoirs of Wirt.”)

THE conduct of Aaron Burr has been considered in relation to the overt act on Blennerhasset’s Island only; whereas it ought to be considered in connection with the grand design; the deep plot of seizing Orleans, separating the Union, and establishing an independent empire in the West, of which the prisoner was to be the chief. It ought to be recollected that these were his objects, and that the whole Western country, from Beaver to Orleans, was the theatre of his treasonable operations. It is by this first reasoning that you are to consider whether he be a principal or an accessory, and not by limiting your inquiries to the circumscribed and narrow spot in the island where the acts charged happened to be performed. 11160 Having shown, I think, on the ground of law, that the prisoner cannot be considered as an accessory, let me press the inquiry whether, on the ground of reason, he be a principal or an accessory: and remember that his project was to seize New Orleans, separate the Union, and erect an independent empire in the West, of which he was to be the chief. This was the destination of the plot and the conclusion of the drama. Will any man say that Blennerhasset was the principal, and Burr but an accessory? Who will believe that Burr, the author and projector of the plot, who raised the forces, who enlisted the men, and who procured the funds for carrying it into execution, was made a cat’s-paw of? Will any man believe that Burr, who is a soldier, bold, ardent, restless, and aspiring, the great actor whose brain conceived and whose hand brought the plot into operation, that he should sink down into an accessory, and that Blennerhasset should be elevated into a principal? He would startle at once at the thought. Aaron Burr, the contriver of the whole conspiracy, to everybody concerned in it, was as the sun to the planets which surrounded him. Did he not bind them in their respective orbits, and give them their light, their heat, and their motion? Yet he is to be considered an accessory, and Blennerhasset is to be the principal! 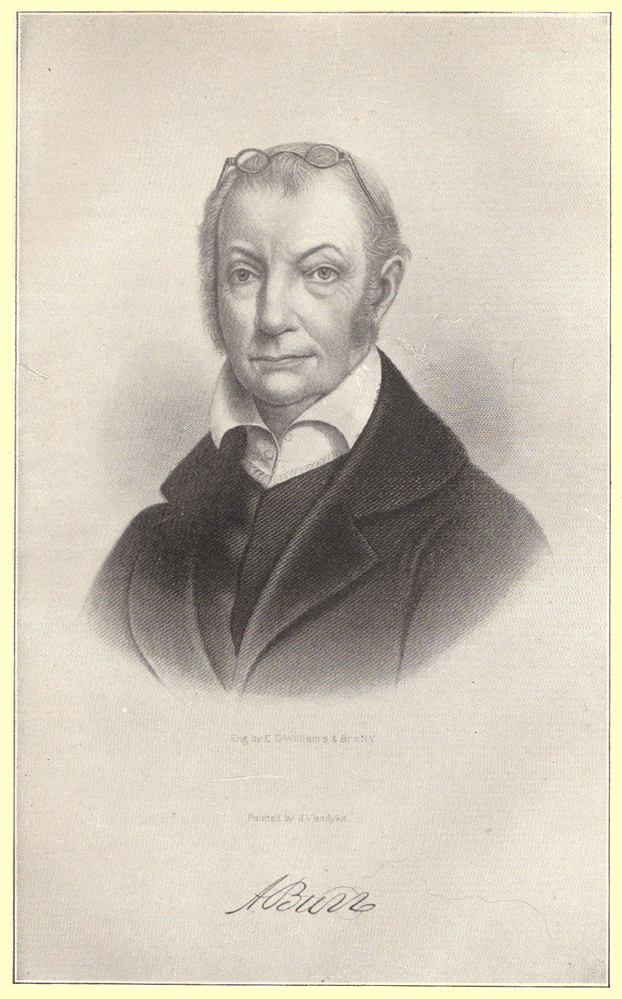 Who Aaron Burr is we have seen in part, already. I will add that, beginning his operations in New York, he associates with him men whose wealth is to supply the necessary funds. Possessed of the mainspring, his personal labor contrives all the machinery. Pervading the continent from New York to New Orleans, he draws into his plan, by every allurement which he can contrive, men of all ranks and descriptions. To youthful ardor he presents danger and glory; to ambition, rank and titles and honors; to avarice, the mines of Mexico. To each person whom he addresses he presents the object adapted to his taste. His recruiting officers are appointed. Men are engaged throughout the continent. Civil life is, indeed, quiet upon its surface, but in its bosom this man has contrived to deposit the materials which, with the slightest touch of his match, produce an explosion to shake the continent. All this his restless ambition has contrived; and in the autumn of 1806 he goes forth, for the last time, to apply the match. On this occasion he meets with Blennerhasset.

Who is Blennerhasset? A native of Ireland; a man of 11161 letters, who fled from the storms of his own country to find quiet in ours. His history shows that war is not the natural element of his mind. If it had been, he never would have exchanged Ireland for America. So far is an army from furnishing the society natural and proper to Mr. Blennerhasset’s character, that on his arrival in America, he retired even from the population of the Atlantic states, and sought quiet and solitude in the bosom of our Western forests. But he carried with him his taste and science and wealth; and lo, the desert smiled! Possessing himself of a beautiful island in the Ohio, he rears upon it a palace, and decorates it with every romantic embellishment of fancy. A shrubbery, that Shenstone might have envied, blooms around him. Music, that might have charmed Calypso and her nymphs, is his. An extensive library spreads its treasures before him. A philosophical apparatus offers to him all the secrets and mysteries of nature. Peace, tranquillity and innocence shed their mingled delights around him. And to crown the enchantment of the scene, a wife, who is said to be lovely even beyond her sex, and graced with every accomplishment that can render it irresistible, had blessed him with her love and made him the father of several children. The evidence would convince you that this is but a faint picture of the real life. In the midst of all this peace, this innocent simplicity and this tranquillity, this feast of the mind, this pure banquet of the heart, the destroyer comes; he comes to change this paradise into a hell. A stranger presents himself. Introduced to their civilities by the high rank which he had lately held in his country, he soon finds his way to their hearts by the dignity and elegance of his demeanor, the light and beauty of his conversation, and the seductive and fascinating power of his address. The conquest is not difficult. Innocence is ever simple and credulous. Conscious of no design itself, it suspects none in others. It wears no guard before its breast. Every door and portal and avenue of the heart is thrown open, and all who choose it enter. Such was the state of Eden when the serpent entered its bowers. The prisoner, in a more engaging form, winding himself into the open and unpractised heart of the unfortunate Blennerhasset, found but little difficulty in changing the native character of that heart and the objects of its affection. By degrees he infuses into it the poison of his own ambition. He breathes into it the fire of his own courage; 11162 a daring and desperate thirst for glory; an ardor panting for great enterprises, for all the storm and bustle and hurricane of life. In a short time the whole man is changed, and every object of his former delight is relinquished. No more he enjoys the tranquil scene; it has become flat and insipid to this taste. His books are abandoned. His retort and crucible are thrown aside. His shrubbery blooms and breathes its fragrance upon the air in vain; he likes it not. His ear no longer drinks the rich melody of music; it longs for the trumpet’s clangor and the cannon’s roar. Even the prattle of his babes, once so sweet, no longer affects him; and the angel smile of his wife, which hitherto touched his bosom with ecstasy so unspeakable, is now unseen and unfelt. Greater objects have taken possession of his soul. His imagination has been dazzled by visions of diadems, of stars and garters and titles of nobility. He has been taught to burn with restless emulation at the names of great heroes and conquerors. His enchanted island is destined soon to relapse into a wilderness; and in a few months we find the beautiful and tender partner of his bosom, who he lately “permitted not the winds of” summer “to visit too roughly,” we find her shivering at midnight, on the wintry banks of the Ohio, and mingling her tears with the torrents, that froze as they fell. Yet this unfortunate man, thus deluded from his interest and his happiness, thus seduced from the paths of innocence and peace, thus confounded in the toils that were deliberately spread for him, and overwhelmed by the mastering spirit and genius of another — this man, thus ruined and undone, and made to play a subordinate part in this grand drama of guilt and treason, this man is to be called the principal offender, while he by whom he was thus plunged in misery is comparatively innocent, a mere accessory! Is this reason? Is it humanity? Sir, neither the human heart nor the human understanding will bear a perversion so monstrous and absurd! so shocking to the soul! so revolting to reason! Let Aaron Burr, then, not shrink from the high destination which he has courted; and, having already ruined Blennerhasset in fortune, character, and happiness forever, let him not attempt to finish the tragedy by thrusting that ill-fated man between himself and punishment.