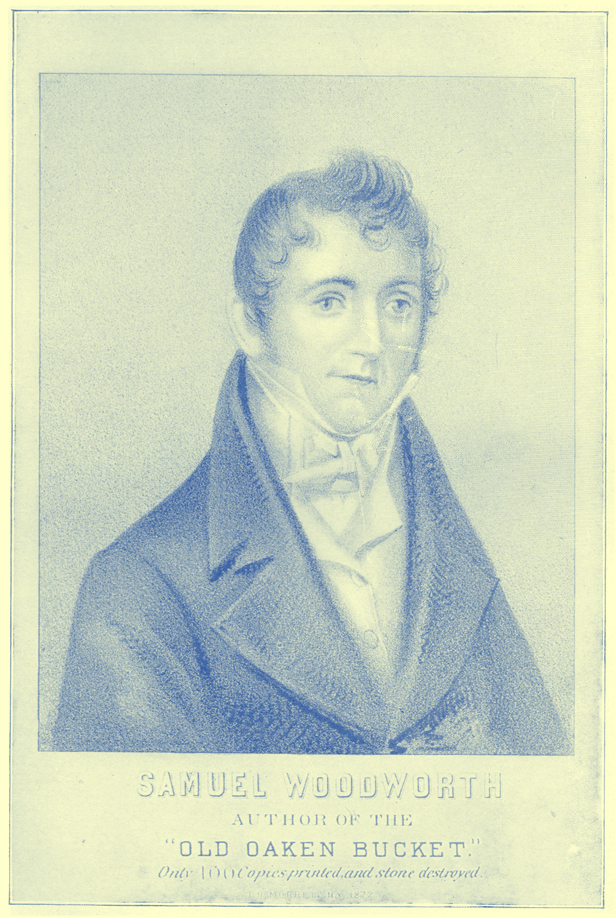 WOODWORTH, SAMUEL, an American poet and journalist; born at Scituate, Mass., January 13, 1785; died at New York, December 9, 1842. He served an apprenticeship in a newspaper office in Boston; worked for a year as a journeyman; then went to New Haven, where he started a weekly journal, “The Belles Lettres Repository,” but the journal lived only eight weeks. In 1809 he went to New York, where he engaged in several literary enterprises. He conducted a weekly journal entitled “The War,” edited a Swedenborgian monthly magazine, and wrote “The Champions of Freedom,” a novel, founded on the war of 1812. He put forth numerous patriotic songs, and composed several melodramas, among which is “The Forest Rose,” which was popular in its day. In 1823, in conjunction with George P. Morris, he established the “New York Mirror,” with which, however, his connection was brief. Toward the close of his life he was disabled by paralysis, and received a substantial complimentary benefit at the National Theatre. He was intimate with the literary men of his day, and Halleck’s poem “To a Poet’s Daughter” was written in the album of the daughter of Woodworth. His permanent reputation as a poet rests wholly upon “The Old Oaken Bucket.”

HOW dear to this heart are the scenes of my childhood,
When fond recollection presents them to view!
The orchard, the meadow, the deep-tangled wild-wood,
And every loved spot that my infancy knew;
The wide-spreading pond, and the mill that stood by it,
The bridge, and the rock where the cataract fell;
The cot of my father, the dairy-house nigh it,
And e’en the rude bucket which hung in the well:
The old oaken bucket, the iron-bound bucket,
The moss-covered bucket, which hung in the well!

11179
That moss-covered vessel I hail as a treasure;
For often at noon, when returned from the field,
I found it the source of an exquisite pleasure,
The purest and sweetest that Nature can yield.
How ardent I seized it, with hands that were glowing,
And quick to the white-pebbled bottom it fell,
Then soon, with the emblem of truth over-flowing,
And dripping with coolness, it rose from the well:
The old oaken bucket, the iron-bound bucket,
The moss-covered bucket, arose from the well!


How sweet from the green, mossy brim to receive it,
As, poised on the curb, in inclined to my lips!
Not a full, blushing goblet could tempt me to leave it,
Though filled with the nectar that Jupiter sips.
And now, far-removed from the loved situation,
The tear of regret will intrusively swell,
As fancy returns to my father’s plantation,
And sighs for the bucket which hands in the well:
The old oaken bucket, the iron-bound bucket,
The moss-covered bucket, which hung in the well!

OH, we are one, and who presumes
To sever hearts like ours,
Would scatter frosts where Eden blooms,
And wither all its flowers:
But should no bands unite our hands,
Till weary life be done,
The ties which join this heart to thine
Will ever make us one.


Yes, pride and rank may sever hands,
But cannot change the heart,
Nor polar snows, nor Afric’s sands,
Congenial spirits part.
Our souls shall meet, in union sweet,
Though seas between us run,
Till pride relents and Fate consents
To make us truly one.