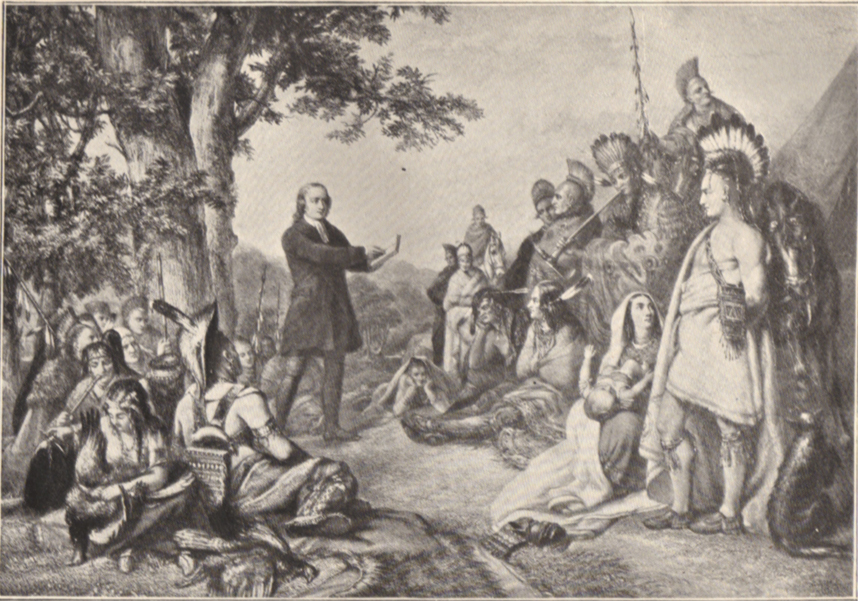 JOHN WESLEY PREACHING TO THE INDIANS

WESLEY, JOHN, an English divine, the founder of Methodism; born at Epworth, June 28, 1703; died at London, March 2, 1791. He was placed, at the age of eleven, in the Charterhouse School at London. At sixteen he was elected to Christ Church College, Oxford, and at twenty-three was chosen a Fellow of Lincoln College. He was admitted to deacon’s orders in the Anglican Church in 1725, and to priest’s orders in 1728. At Oxford, John Wesley, his brother Charles, and several other students formed themselves into a club, for religious study, the members of which were jeeringly styled “Methodists.” This name has been adopted by his followers in the United States, but in Great Britain they usually style themselves “Wesleyans.” In 1735 he was invited by General Oglethorpe to go out with him as missionary chaplain to his colony of Georgia. He remained here more than two years, when he returned to England. In July, 1740, he made a formal church organization in London, and began his work as an independent minister. His ministry continued for fully fifty years. He continued his active labors to the very close of his life; his last sermon being delivered only eight days before his death, in his eighty-eighth year. He extended his spiritual jurisdiction over the British colonies. This supervision was continued after the colonies in America had become independent, and in 1784 he organized the Methodists in the United States into a separate Episcopal body. The works of Wesley are very numerous. They embrace sermons, essays, translations, and abridgments, many of them designed for text-books in the schools of his societies. He also wrote many hymns, in part free translations from German hymnists.

THE KINGDOM OF HEAVEN.

(From the “First Discourse upon the Sermon on the Mount.”)

THIS is that kingdom of heaven, or of God, which is within us: even “righteousness, and peace, and joy in the Holy Ghost.” And what is “righteousness,” but the life of God in the soul; the mind which was in Christ Jesus; the image of 10999 God stamped upon the heart now renewed after the likeness of him that created it? What is it but the love of God, because he first loved us, and the love of all mankind for his sake?

An what is this “peace,” the peace of God, but that calm serenity of soul, that sweet repose in the blood of Jesus, which leaves no doubt of our acceptance in him; which excludes all fear, but the loving, filial fear of offending our Father which is in heaven?

This inward kingdom implies also “joy in the Holy Ghost;” who seals upon our hearts “the redemption which is in Jesus,” the righteousness of Christ imputed to us “for the remission of the sins that are past;” who giveth us now “the earnest of our inheritance,” of the crown which the Lord, the righteous Judge, will give at that day. And well may this be termed “the kingdom of heaven;” seeing it is heaven already opened in the soul; the first springing up of those rivers of pleasure which flow at God’s right hand for evermore.

“Theirs is the kingdom of heaven.” Whosoever thou art to whom God hath given to be “poor in spirit,” to feel thyself lost, thou hast a right thereto, through the gracious promise of Him who cannot lie. It is purchased for thee by the blood of the Lamb. It is very nigh: thou art on the brink of heaven! Another step, and thou enterest into the kingdom of righteousness, and peace, and joy! Art thou all sin? “Behold the Lamb of God, who taketh away the sin of the world!” All unholy? See thy “Advocate with the Father, Jesus Christ the righteous”! Art thou unable to atone for the least of thy sins? “He is the propitiation for [all thy] sins.” Now believe on the Lord Jesus Christ, and all thy sins are blotted out! Art thou totally unclean in soul and body? Here is the “fountain for sin and uncleanness”! “Arise, and wash away thy sins!” Stagger no more at the promise through unbelief! Give glory to God! Dare to believe! Now cry out from the ground of thy heart, —

“Yes, I yield, I yield at last,
Listen to thy speaking blood;
Me, with all my sins, I cast
On my atoning God!”

Then thou learnest of him to be “lowly of heart.” And this is the true, genuine, Christian humility, which flows from 11000 a sense of the love of God, reconciled to us in Christ Jesus. Poverty of spirit, in this meaning of the word, begins where a sense of guilt and of the wrath of God ends; and is a continual sense of our total dependence on him for every good thought, or word, or work, — of our utter inability to all good, unless he “water us every moment,” and an abhorrence of the praise of men, knowing that all praise is due unto God only. With this is joined a loving shame, a tender humiliation before God, even for the sins which we know he hath forgiven us, and for the sin which still remaineth in our hearts, although we know it is not imputed to our condemnation. Nevertheless, the conviction we feel of inbred sin is deeper and deeper every day. The more we grow in grace, the more do we see of the desperate wickedness of our heart. The more we advance in the knowledge and love of God through our Lord Jesus Christ (as great a mystery as this may appear to those who know not the power of God unto salvation), the more do we discern of our alienation from God, — of the enmity that is in our carnal mind, and the necessity of our being entirely renewed in righteousness and true holiness.

THE LOVE THAT HOPETH AND ENDURETH ALL THINGS.

(From the “Second Discourse upon the Sermon on the Mount.”)

AND when it can no longer believe, then love “hopeth all things,.” Is any evil related of any man? Love hopes that the relation is not true, that the thing related was never done. Is it certain it was? — “But perhaps it was not done with such circumstances as are related; so that allowing the fact, there is room to hope it was not so ill as it is represented.” Was the action apparently, undeniably evil? Love hopes the intention was not so. Is it clear the design was evil too? — “Yet might it not spring, not from the settled temper of the heart, but from a start of passion, or from some vehement temptation which hurried the man beyond himself?” And even when it cannot be doubted but all the actions, designs, and tempers are equally evil, still love hopes that God will at last make bare his arm and get himself the victory; and that there shall be “joy in heaven over [this] one sinner that repenteth, more than over ninety and nine just persons that need no repentance.

Lastly: It “endureth all things.” This completes the character of him that is truly merciful. He endureth not some, not many things only, not most, but absolutely all things. Whatever the injustice, the malice, the cruelty of men can inflict, he is able to suffer. He calls nothing intolerable; he never says of anything, “This is not to be borne.” No: he cannot only do but suffer all things through Christ which strengtheneth him. And all he suffers does not destroy his love, nor impair it in the least. It is proof against all. It is a flame that burns even in the midst of the great deep. “Many waters cannot quench” his “love, neither can the floods drown it.” It triumphs over all. It “never faileth,” either in time or in eternity.

“Thus in obedience to what Heaven decrees,
Knowledge shall fail, and prophecy shall cease;
But lasting charity’s more ample sway —
Nor bound by time, nor subject to decay —
In happy triumph shall forever live,
And endless good diffuse, and endless praise receive.”

So shall “the merciful obtain mercy:” not only by the blessing of God upon all their ways, by his now repaying the love they bear to their brethren a thousandfold into their own bosom; but likewise by “an exceeding and eternal weight of glory,” in the “kingdom prepared for them from the beginning of the world.”

*  For another short biographical note and some poems by his less famous brother, see “Charles Wesley,” in this same book.

Even better, see the funny epigram written by their father, “On Butler’s Monument,” by Reverend Samuel Wesley, on this site, from Parton’s Humorous Poetry. — Elf.Ed.