Greek Religion from the Beginning of the Homeric Age :

X.  The Goddesses of Fate.   § 119.  As order and law in the states of men came gradually to prevail over the arbitrary will of the strong man, these ideas were independently personified in the Goddesses of Fate standing by the side of the gods of the older time, — gods conceived, entirely on the model of human rulers, as swayed by passions. In Homer, as in the States of his age, the position of these goddesses is still uncertain. The ‘apportioned lot,’ Moira — who appears also, though not so often, in the plural number as well, — or Aisa, is regarded sometimes as an expression of the will of Zeus, while in other parts of the poems she already stands independently by his side or even above him, and in this case he, like the other gods, does but execute her decisions. Hence the Moirai in Hesiod are in one place styled daughters of Night, and in another children of Zeus and Themis. They decide the destiny of man at once on his birth, and all the important events of life, especially marriage and death, take place under their direction. After Hesiod three Moirai are distinguished — Klotho, ‘spinner of the life’s thread,’ Lachesis, the ‘giver of life’s portion,’ and Atropos, the ‘unswerving, inexorable one,’ who sends death. In accordance with this they carry as emblems in art spindles and lots, sometimes also a roll and the balance, like their mother Themis. The Romans identified them with their own Parcae and Fata.

§ 120.  Nemesis, ‘the apportioner,’ who first appears in personal form in Hesiod, originally embodies, like them, the idea of the ‘allotted portion.’ She watches over the maintenance of due measure, and hence the ell-rule and balance pertain to her as emblems. As moreover she reprobates and punishes (νεμεσάω, νεμεσίζομαι) all offences against the law of measure, especially those caused by immoderate self-confidence (hybris), she becomes also the wrathful requiter; and now as a tamer of arrogance she holds a bridle, yoke and
69
70
71 scourge. Usually however she is characterised as the goddess warning men against pride by the gesture of spitting into her bosom, while at the same time lifting her robe; for by this token of humiliation men sought to ward off the baneful results of pride. As requiter in the next world she was honoured in Athens at the festival of the Nemesia; proper worship however was accorded to her only at Rhamnus in Attica. On her identification with Leda see § 135.

§ 121.  Of these personifications, which gradually dissolved the old belief in the gods, the latest is Tyche, ‘Good Luck,’ the Latin Fortuna. She appears indeed as a person already in the older lyric poets; but she does not gain any general worship as a god until faith in the power of the old deities begins to wane. Now in the age of unbelief she was reputed the giver of fruitfulness and wealth, as well as the director of human destiny and the saviour from perils at sea and in war; hence also she was often regarded as the guardian goddess of cities. The horn of plenty and rudder were her attributes; and besides these a rolling wheel or a ball was assigned to her, in order to indicate Fortune’s fickleness. 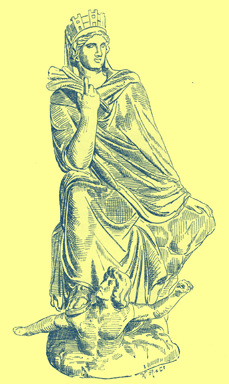 § 122.  The worship of this goddess of Chance however properly amounts to a denial of all real divine power. Thus after the destruction of the old positive faith in gods who guided in consciousness and grace men’s destinies, the Greek world made itself ready to receive the new doctrine of salvation going forth from Palestine. For although for a time philosophy strove to inspire anew the old outworn forms with a content of ethical thought, it was never able to furnish a truly comforting conviction of a life after death and of a justice that shall make amends for the imperfections of this world.