Italian wit is frequently no laughing matter, but everyone can smile approval to the replies of Cisti, the baker, or the defence of Currado’s Cook, or The Retort Courteous. It will be observed that the impulsive children of Italy prefer to act out their witticisms.

IT is beyond my capacity to determine whether Nature be more in fault, when she joins a generous soul to a homely person; or Fortune in dooming a body, graced with a noble spirit, to a mean condition of life, as was the case of a citizen of ours named Cisti, as well as of many others. For this man, though he had a truly great spirit, yet Fortune made him no better than a baker. For my part, I should quarrel with both Nature and Fortune, did I not know Nature to be absolutely wise, and that Fortune has a thousand eyes, although fools have described her as blind. I suppose, therefore, that both, being truly wise and judicious, act as we ourselves often do, who, uncertain of what may happen, for our convenience often bury our most valuable treasure in the meanest places of our houses, as the last liable to suspicion; whence we can fetch them in time of need, and where they have continued more secure than they would have been in the best chamber of the house. So these two ministers of the world do many times hide their most precious blessings under the cover of some mean employ, to the end that, drawing them thence when need requires, they may appear with greater luster; which was plainly shown, although in a small matter, by our baker Cisti, to the apprehension of Signor Geri Spina.

You must know, then, that Pope Boniface, with whom this same Signor Geri was in great esteem, having occasion to send ambassadors to Florence about some particular business, they were entertained at this Geri Spina’s house 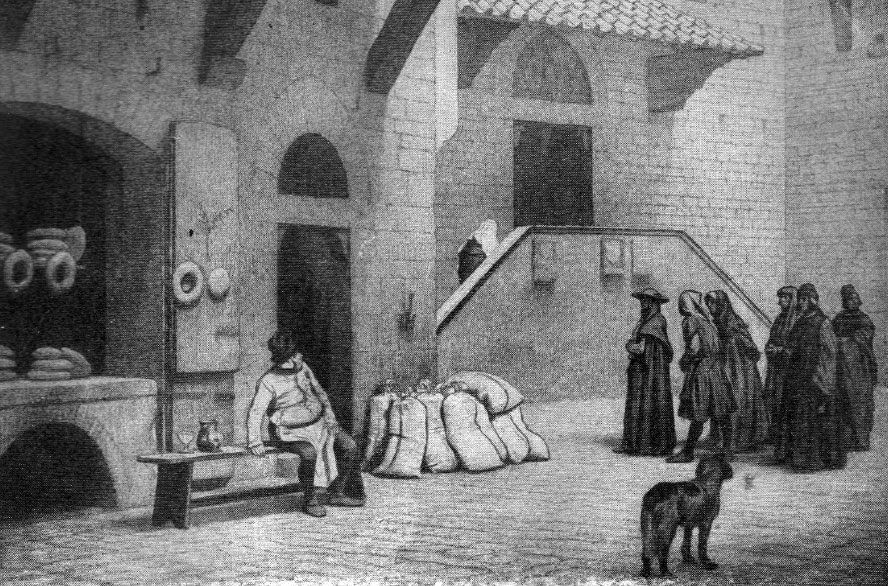 (From the engraved print made for this story by the famous Italian artist, Tito Lessi)


and employed with him in the said pope’s negotiation. It happened, whatever was the reason, that they passed on foot every morning by the Church of St. Maria Ughi, where Cisti the baker dwelt and followed his trade. Though Fortune had given Cisti but a mean employ, yet in this respect she had been kind to him — that he had grown very rich in it; and, without having any desire to leave it for a better, he lived very generously among his neighbors, having everything in plenty, the best wine especially, both red and white, that the country could afford.

Now, seeing the ambassadors walk daily by his door, Cisti supposed, as the season was sultry, that it would be esteemed a kindness to let them drink some of his fine white wine; but regarding at the same time the disparity between his station and theirs, he would not presume to invite them, but thought of a way whereby Signor Geri might be induced of his own accord to taste it. Having a white frock on, therefore, with an apron before him, which bespoke him rather a miller than a baker, every morning about the time that he supposed they should come that way, would he order a bucket full of fair water to be brought, and a decanter of wine, with a couple of beakers as bright as crystal, to be set before him; then seating himself at his door, and first clearing his mouth and throat, he would take a draught or two just as they were going past, with a gusto sufficient to cause an appetite almost in a man that was dead.

Signor Geri, observing this once or twice, said the third time: “What say you? Is your wine good, Master Cisti?”

“That it is, signor,” he replied, starting up; “but how can I convince you unless you taste?”

Signor Geri, whom either the heat of the weather, or his extraordinary fatigue, or perhaps the relish with which he saw the other drink, had rendered thirsty, turned with a smile to the ambassadors, and said:

“Gentlemen, we may as well drink of this honest man’s wine, perhaps it is such that we shall not need to repent.”

Accordingly they went together to Cisti, who, ordering seats to be brought out of his bakehouse, prayed them to sit down, saying to their servants, who offered to wash their glasses:

“Friends, get you gone; leave this to me. I am no worse a skinker than a baker, and stay you ever so long you shall not taste a drop.”

Washing then four neat glasses, and ordering a fresh decanter to be brought, he filled round to Signor Geri and the ambassadors, who all thought it the best wine they had tasted in a long time; and having highly commended it, they called to drink with him most mornings during their stay. At length, having despatched their business, and being about to depart, Signor Geri made an entertainment for them, to which he invited a great part of the most eminent citizens, and Cisti amongst the rest, who could by no means be persuaded to go. Signor Geri then ordered one of his servants to fetch a flask of Cisti’s wine, and to fill half a glass round to all the company at the first table. The servant (offended, as we may suppose, that he had never been able to get a taste of it) took a very large bottle, which as soon as Cisti saw, he said:

The servant affirmed over and over that he had, but meeting with no other reply, he returned to his master and told him. Then said Signor Geri:

“Go back, and tell him I did send thee, and if he makes the like answer again, ask him whither he thinks I should send thee.”

The servant went again and said, “Most assuredly, Signor Geri, my master, has sent me to you.”

“I tell thee, friend, it is impossible.”

“Then” quoth the servant, “whither do you think he sent me?”

“To the river Arno.”

When the fellow reported this answer to Signor Geri, his eyes were immediately opened, and he said:

“Let me see what bottle it was which you carried to 91 him.” On seeing it, he added, “Now, trust me, Cisti spoke truth.”

Then reprimanding him severely, he ordered him to take a more suitable vessel, which as soon as Cisti saw, he said, “Why, now I am certain that he sent thee to me,”; and he filled it very readily for him. That day also he had a cask filled with the same wine, which he sent to Signor Geri’s house, and going himself after it, he thus addressed him:

“Sir, I would not have you think that I was any way startled at the sight of the great bottle this morning; but as I imagined you had forgotten what I had endeavored to intimate to you for several days past with my little decanters; namely, that mine is no wine for servants; so I only did it to remind you again of the same. But, meaning to be steward no longer, I have now brought my whole store; dispose of it as you please.”

Signor Geri was extremely thankful for his valuable present, and ever afterwards esteemed him as his most intimate friend.