I bought this book from The Ben Franklin Bookstore, in Worcester, Massachusetts. It went out of business shortly afterwards. It was just about the only old book store in that large city. It was downtown, too, with free parking and everything.

The reason I got it was because Tory’s almost brand-new husband, Karl, was raised on a small farm and corn was its primary crop. He did chores on the farm after school all of his life. He still cannot eat frozen or canned corn, being spoiled from having fresh corn every year of his youth. So I figured that maybe there would be something in it that would interest him. We’ll see.

Despite the name, Cornfield Philosophy, C. D. Strode wrote for the lumbar press for many years. So, in fact, there isn’t much about farming in the whole collection of essays. Many of the pieces are about the sawmill business. Because the biggest disaster to our continent was the destruction of vast amounts of timberland, all within a period of 20 to 30 years, it is not surprising that he does not have much good to say about the state of the sawmill business even as early 1902, when he compiled the collection.

This rapid rise and fall of the timber industry in Illinois and Indiana never occurred to me really. I always assumed this part of America was all flatland, the start of the western prairies. But I was only made aware of the havoc wrought by the the lumbar trade for the first time when I went to Minnesota for a couple of months, two years ago. I was looking forward to seeing the great forests that I had always imagined existed there, after reading the Laura Ingalls Wilder series as a kid. I was appalled to find that there are no forests left. I do not count little toothpick trees, which were all I saw, all crammed together as close as the bristles on a toothbrush and none more than 20 to 30 feet high (if that). It was the saddest thing I ever saw. And I drove through almost all of the state. So it does not surprise me to realize that Indiana and Illinois probably had more forests too, before the white man came.

Not only can flooding, blizzards, and tornadoes, be nothing but the natural consequence of the loss of all those large, soil-holding leafy windbreaks, created naturally by the great forests, but I saw no sense of shame, remorse, collective guilt or any acknowledgement of fault for the complete rape of the Minnesotan wilderness that occurred there by the descendants, or by any of the historians who ever taught me in school. I don’t even think most people know what this state looked like 150 years ago. Of course, why talk about it? Why acknowledge the crime or the cupidity? It’s the American way after all. Such wholesale greed makes the coalminers in Kentucky almost seem environmentally friendly. This was not the only moment I missed Appalachia, either, let me tell you, on my sally into Minnesota. That’s saying something alright.

Anyway, usable trees for the local Illinois lumbar trade were gone by 1902, that is clear by Strode’s book. He tells of sawmill owners travelling to Tennessee in quest of trees for the mills. He doesn’t come right out and say this directly. The book is not a history of the lumbar industry. This is a book of his past editorials on various subjects, from tramps, to a short appreciation of George Washington, to "How to Acquire Riches," in two parts, as well as a few hints about Chicago political corruption, already a time-honored tradition.

Several of his essays are funny: the funniest is Jerry Whalen’s Story. But next in order of ’humorosity’ is The Hidden Culls (A Romance), or the Saw Mill Man’s Revenge, which is a parody of the current newspaper serialiazed novels.

What also struck me was the fact that middle class men had only two suits of clothes back then: a winter suit and a summer suit. Strode also states that he had only one pair of socks per season, too, and he hopes he gets a second pair for Christmas. That is so hard to imagine! How much money we waste on clothes! Saving money was important then, because there were no pension plans and no social security and everybody knew that if they did not save, they would starve when they could not work any longer. His emphasis on fiscal prudence is repeated ofen throughout these pages. People did not buy an extra pair of shoes to match different outfits: there were no different outfits. Other facts of the daily costumes and customs can be read in the descriptions by Strode or seen in the illustrations by Anderson.

Oddly, the illustrator’s name, Percy E. Anderson, is never mentioned by Strode, or in the title pages. The only way I learned who he was was by magnifying the illustrations to read the signature. His works is good and adds immeasurably to the appeal of the book.

Cornfield Philosophy is pleasant reading, and since Strode does not mind being silly at times, it is often more than pleasant. He also seems to be a very kind man. The more you read, the better you like him.

The book itself is very well made, and the paper is excellent. It remains a credit to Strode, who ended up owning a newspaper, after working for them for years and so he could have used cheaper, less durable paper like many other small publishers did. He did not take that route and the book has held up better than many 10 year old ones that I have on my shelf and much better than many others from that era.

Click on the pretty image of the cover below to get reading: 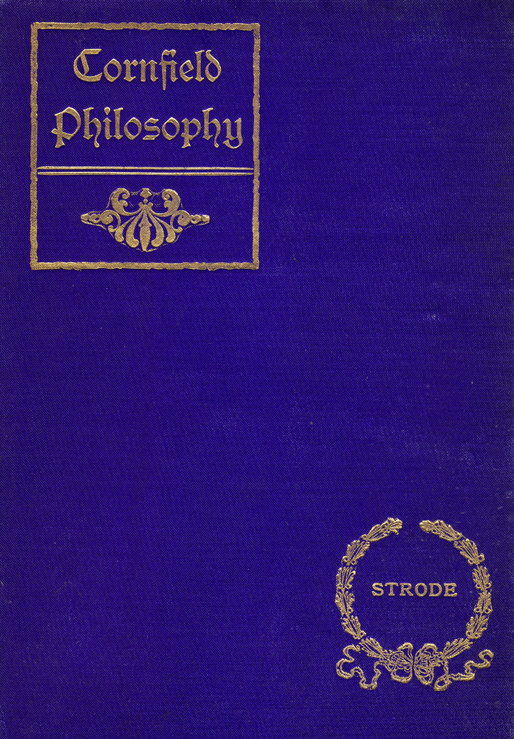