From, Beautiful Buildings in France & Belgium, Including many which have been destroyed during the war. Reproductions in Colour and Monochrome from rare old Prints and Drawings, by and after Prout, Boys, Coney, W. Callow, David Roberts, C. Wild and others, with descriptive notes, by C. Harrison Townsend, F.R.I.B.A.; New York: The Hubbell Publishing Co., 1916; pp. 82-85. 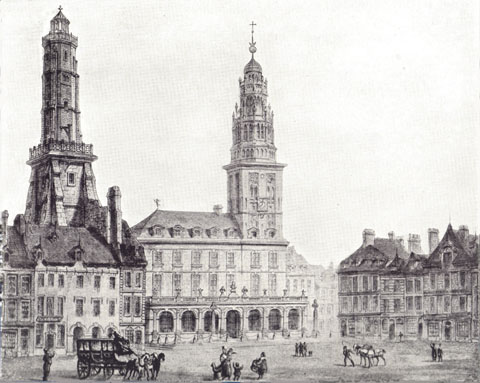 HE spirit of the old and sleepy Calais of Coney’s time, and its difference from the busy arrival and starting point for continental travel of to-day, are made clear to us from his drawing. Then an important harbour, certainly, but of moderate proportions, it is now a huge shipping and naval centre, with docks and harbour upon which, of late years, no less than £3,000,000 have been laid out.

The Hôtel de Ville, in the Place d’Armes, the subject of the sketch, is a late Renaissance building of 1740, standing on the site of an earlier building. The bronze 84 busts surrounding the balcony commemorate Richelieu, the founder of the Citadel, which overlooks the town on the west, and the Duc de Guise, “libérateur de Calais” in 1558. The Belfry is a portion, somewhat modernized, of the older building, and belongs to the XVIth and early XVIIth centuries. To the left of the picture is the Tour du Guet, a massive watch-tower, used as a lighthouse till 1848.