The Services and Customs of Royal Oak Day.

RITING in his diary, on May 29th, 1665, John Evelyn says: “This was the first anniversary appointed by Act of Parliament to be observed as a day of General Thanksgiving for the miraculous restoration of His Majesty: our vicar preaching on Psalm cxviii. 24, requiring us to be thankful and rejoice, as indeed we had cause.” A special form of prayer in commemoration of the Restoration of Charles II. was included in the Book of Common Prayer until 1859, when it was removed by Act of Parliament.

On this day, the Chaplain of the House of Commons used to preach before the House, in St. Margaret’s Church, Westminster. The service has been discontinued since 1858. It attracted little attention, and the congregation 178 usually consisted of the Speaker, the Sergeant-at-arms, the clerks and other officers, and about half a dozen members.

It was, in bygone times, in many parts of England, the practice, on this day, to fasten boughs of oak to the pinnacles of church steeples.

The display of oak is in memory of the king’s escape after the Battle of Worcester, in 1651, and of his successfully hiding himself in an oak tree at Boscobel. Tennyson, in his “Talking Oak,” refers to the subject:

“Thy famous brother oak,
Wherein the younger Charles abode,
Till all the paths grew dim,
While far below the Roundheads rode,
And humm’d a surly hymn.”

Richard Penderel greatly assisted Charles in his time of trouble, and he selected the oak in which safety was found. When Charles “came to his own,” the claims of Penderel were not overlooked. He was attached to the Court. When he died, he was buried with honours at St. Giles-in-the-Fields. It was customary, for a long period, to decorate his grave in the churchyard with oak branches.

Formerly, in Derbyshire, it was the practice to 179 place over the doors of houses, branches of young oak, and it is still the custom for boys to wear sprigs of the same tree in their hats and button-holes. If the lads neglect to wear the oak-leaf they are stung with nettles by their more loyal companions. At Looe, and other districts of East Cornwall, it was enforced by spitting at or “cobbing” the offender. In bygone times, the boys of Newcastle-on-Tyne had an insulting rhyme, which they used to repeat to such folk as they met who did not wear oak-leaves:

“Royal oak
The Whigs to provoke.”

On this day, may wore plane tree leaves, and would make a retort to the foregoing rhyme:

Mr. John Nicholson, in his “Folk Lore of East Yorkshire” (Hull, 1890), has an interesting note on this subject. “During the days of spring,” says Mr. Nicholson, “boys busily ‘bird-nest’ (seek nests), and lay up a store of eggs for the 29th of May, Royal Oak Day, or Mobbing Day. These eggs are expended by being thrown at other boys, but all boys who carry a sprig of Royal Oak, not dog oak, either in their cap or 180 coat, are free from molestation. Not only wild birds’ eggs, but the eggs of hens and ducks are used to ‘mob’ (pelt) with, and the older and more unsavoury the eggs are, the better are they liked — by the thrower. The children sing:

‘The twenty-ninth of May,
Royal Oak Day,
If you don’t give us a holiday
We’ll all run away.’”

At Castleton, Derbyshire, an old custom still lingers of making a huge garland of flowers on this day, and afterwards suspending it on the top of the principal pinnacle of the church. The late Mr. Alfred Burton saw this garland constructed in 1885, and had a drawing made of it for his volume entitled “Rush-bearing.” “The framework,” says Mr. Burton, “is of wood, thatched with straw. Interior diameter, a little over two feet, outside (when covered with flowers), over three feet six inches. In shape it somewhat resembles a bell, completely covered over with wild flowers — hyacinths, water-buttercups, butter-cups, daisies, forget-me-nots, wallflowers, rhododendrons, tulips, and ornamental grasses, in rows, each composed of the same flower, which have been gathered in the neighbourhood the 181 evening before. The top, called the ‘queen,’ is formed of garden flowers, and fits into a socket at the top of the garland. It weighs over a hundredweight, requires two men to lift it, and has occupied four men from noon till five o’clock in the afternoon to make it.” 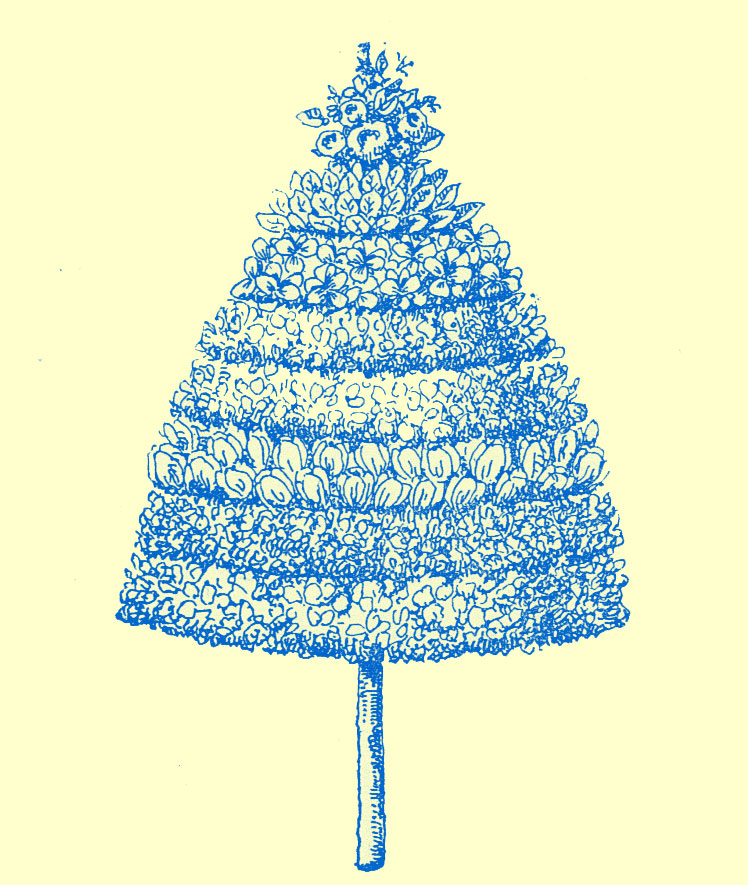 At six in the evening, a procession is formed from a village inn, whose turn it is to take the lead in the festivities. A band of music heads the processionists, next comes the garland, which, we are told by Mr. Burton, is “borne on the head 182 and shoulders of a man riding a horse, and wearing a red jacket. A stout handle inside, which rests on the saddle in front of him, enables him to hold it upright. It completely envelopes him to the waist, and is roomy enough to enable ale to be passed up to his mouth, of which he takes good care to have a share. His horse is led for him, and he is followed by another man on horseback, dressed as a woman, who acts the fool. These are followed by the villagers, dancing, even old people who can scarcely walk making a point of attempting to dance on this, the greatest day in the year at Castleton. After parading the village, the ‘queen’ is taken off the garland and placed in the church, the garland being hoisted with ropes to the top of the church tower, where it is placed on one of the pinnacles, and left till it has withered away, when the framework is taken down and kept for another year. The other pinnacles have branches of oak.”

In the churchwardens’ accounts of Castleton, are entries as follows:

Payments for ringing bells on the 29th May 183 occur frequently in churchwardens’ accounts, and a few examples may be quoted. The first is from Wellington, Somerset:

Northampton is loyal to the memory of Charles II. He was a benefactor to the borough, and helped the inhabitants after the great fire of 1675. In the Baptismal Register of All Saints’, Northampton, it is recorded, under September 1675, as follows: “In this month, a very lamentable fire destroyed 3 parts of our Towne and Church.” The Marriage Register says: “While the world lasts, remember September the 20th, a dreadfull fire, it consumed to ashes in a few houres, 3 parts of our Towne and Cheef Church.” The sum of £25,000 was collected by briefs and private charities towards the heavy loss sustained by the inhabitants. Charles II. gave 1000 tons 184 of timber out of Whittlewood forest, and remitted the duty of chimney-money in the town for seven years. We gather from Hume, that “the king’s debts had become so intolerable, that the commons were constrained to vote him an extraordinary supply of £1,200,000, to be levied by eighteen months’ assessment, and, finding upon inquiry that the several branches of the revenue fell much short of the sums they expected, they at last, after much delay, voted a new imposition of 2s. on each hearth, and this tax they settled on the king during his life.”

Macaulay speaks of this tax as being “peculiarly odious, for it could only be levied by means of domiciliary visits. . . . The poorer householders were frequently unable to pay their hearth-money to the day. When this happened, their furniture was distrained without mercy, for the tax was farmed, and a few farmer of taxes, is, of all creditors, proverbially, the most rapacious.” He quotes from some doggerel ballads of the period, and the following is one of the verses reproduced:

“The good old dames, whenever they the chimney-man
espied,
Unto their nooks they haste away, their pots and pipkins
hide;
185
There is not one old dame in ten, and search the nation
through,
But, if you talk of chimney-men, will spare a curse or
two.”

A reference to chimney-money occurs in an epitaph in Folkestone churchyard. Here is a copy:

A house she hath; it’s made of such good fashion,
The tenant ne’er shall pay for reparation,
Nor will her landlord ever raise her rent,
Or turn her out of doors for non-payment,
From chimney-money too this cell is free —
To such a house, who would not tenant be?”


The inhabitants of Northampton, to show their gratitude to the king for his consideration, displayed oak branches over their house doors. The members of the corporation, accompanied by the children of the charity schools, attend service at All Saints’ Church. A statue of the king, in front of the church, is usually enveloped in oak boughs on May 29th.