HE use of the coffin may be traced back to a remote period. The remains of Joseph were conveyed in a coffin from Egypt to Canaan. The Christians adopted their use from the heathen.

Coffins have been made of various kinds of material. Cedar was used for the Athenian heroes on account of its aromatic and incorruptible qualities. It is said that Alexander was buried in one made of gold. Marble and stone were largely used by the Romans, but many lead coffins have been found in the Roman cemeteries at Colchester, York, London, and other places. Coffins of baked clay and cists formed of tiles have been found at York and at Adlborough. Glass coffins have been used in England. Wooden coffins are, in this country, of great antiquity. It is recorded that King Arthur 219 was buried, in 542, in the entire trunk of a tree, hollowed. Some of the earlier coffins made of wood are extremely rude in shape. Abbot Warin, of St. Alban’s, 1183-95, gave directions for the monks to be buried in stone coffins. They had previously been buried without coffins, under the green turf. According to an ancient legend, St. Cuthbert’s remains sailed down the Tweed in a stone coffin.

Generally speaking, the modes of burying the dead in the Middle ages were without coffins. The corpses were usually enveloped in linen, but members of religious houses were usually buried in the habit of their order.

Coffins, in their universal use in this country, comparatively speaking, belong to modern times. Thomas Hearne, the antiquary, writing in 1742, says that sixty years before that period it was a common custom to bury the dead without coffins. People of rank, however, were usually buried in coffins, unless they left directions to the contrary.

to deposit their dead in a vault at Roslin Chapel, attired in the armour they had used in life.

In Ireland, there was a curious custom of burying the dead without coffins. “Until about the year 1818,” says a correspondent of Notes and Queries, Second Series, vol. i., p. 455, “certain families, named Tracey, Doyle, and Daly, of the townland of Craan, near Enniscorthy, in the barony of Scarawalsh, in the county of Wexford, were in the habit of burying their dead uncoffined, in the graveyard attached to the Augustinian Abbey of Saint John. The bodies were brought to the place of sepulture in open coffins, with their faces uncovered. The graves were made six or more feet deep, and line with bright green turf from the banks of the river Slaney. In these green chambers, were strewn moss, dry grass, and flowers, and a pillow of the same supported the head of the corpse when it was laid in its last earthly bed.”

In a “Table of Dutyes” of Shoreditch Church, 1664, are references to the amounts to be paid if coffins are not used at funerals. It is stated, “for a burial in ye new churchyard, without a coffin, eight pence; for a burial in ye olde churchyard, without a coffin, seaven pence; and for the grave-making and attendance of ye Vicar and Clarke on ye enterment of a corps uncoffined, the churchwardens 221 to pay the ordinary duteys, and no more, of this table.”

The poor were usually buried in parish coffins, or rather taken from their humble homes to the grave in a coffin, and at the grave removed from it and merely interred in their shrouds. At Easingwold Church, in East Yorkshire, an interesting example of the parish coffin is still preserved. It is strongly and roughly made of oak. We give an illustration of this old-time relic from a carefully-made drawing by Mr. J. H. Doe.

In Smith’s “Old Yorkshire,” vol. v., pp. 106-110, will be found an informing article on the Easingwold and other parish coffins, by the late Llewellynn Jewitt, F.S.A., who collected much out-of-the-way information on this subject. From the Rev. Canon Hayman, he received the following important communication: “The old historical town of Youghal, in the county of Cork,” wrote Canon Hayman, “has many features of 222 interest for the antiquary, chiefest among which is the venerable Collegiate Church of St. Mary. The cemetery attached to this noble edifice is the Pere la Chase of Ireland. The ground naturally forms a succession of terraces, here swelling into little knolls, there sinking into gentle declivities. A poet said of the Protestant burial ground of Rome: ‘It might make one in love with death to think that one should be buried in so sweet a place,’ and the saying may be repeated of the Youghal churchyard. Death is here divested of its horror, and wears the softened aspect of stillness and unbroken repose. On its northern and western sides, the cemetery is overhung by the old walls of the town, which are yet in good preservation. In a portion of those defences, nearly opposite to the western gable of the church, is a recessed [coffin-shaped] aperture, of which the accompanying is an engraving. Here, as the old folk tell us, was kept the public coffin for the poor of Youghal. Whenever needed, it was sent to the house of the dead; and, so soon as it had discharged its office, it was replaced here. The walls, as may be perceived, are of three thicknesses. The newest piece, in front, is of hammered, well-squared masonry. More ancient 223 is the furthest drawn, where the materials are less in size, and are less carefully finished; but, lying between these twain, is a fragment of a very old wall, built of exceeding small stones, and evidently preserved from demolition because of its characteristic feature — the Parish Coffin Recess.” It will be observed, from the illustration we give, that the recess was coffin-shaped, so that when the parish coffin was not in use it might be placed upright in the place specially prepared for it. 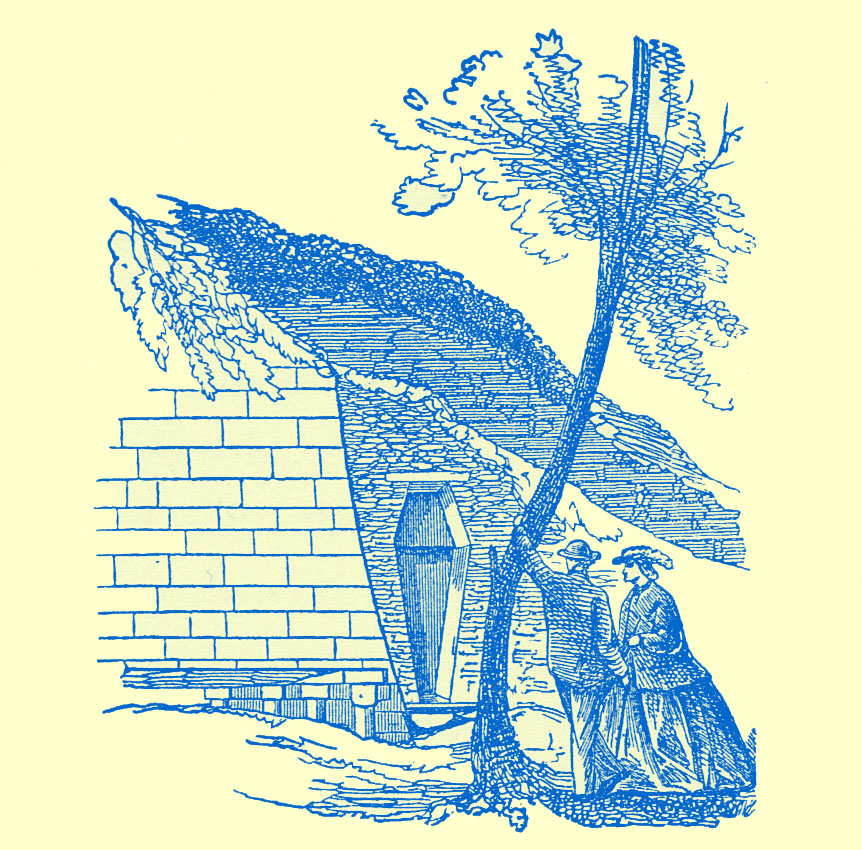 Respecting the parish coffin of Stockton-on-Tees, there is a note in the history of the town, by the Rev. John Brewer, and published in 1796. 224 It is stated: “Soon after the Rev. Geo. Walker, vicar [1715], came to reside at Stockton-on-Tees, he was called upon to inter a poor person. When they came to the grave, the attendants were preparing to take the body out of the shell or coffin which contained it. He enquired what they were doing, and was informed that the same coffin was used for the funerals of the poor, and that this was intended to serve again. He insisted on its being put into the ground with the body; and, from this time, took care to prevent a repetition of such an act of indecency.”

During the visit of the members of the Yorkshire Architectural Society to Howden, on August 25th, 1885, an old oak parish coffin was inspected by them. It was much dilapidated, but on it could be traced the date, 1664.

We have found in old churchwardens’ accounts several entries relating to parish or church coffins. In the Vestry Book of St. Oswald, Durham, are the following items:

The same parish records for 1666-7 contain an entry as follows:

Parish coffins must have been very distasteful to the poor, for the humbler classes of England dearly love a display at a funeral. An epitaph in St. Michael’s churchyard, Macclesfield, illustrates the weakness in this direction in our character. It reads as follows:

The chief concern of her life for the last 20 years was to order and provide for her funeral. Her greatest pleasure was to think and talk about it. She lived many years on a pension of 9d. a week, and yet saved £5, which, at her own request, was laid out on her funeral.”

In the reign of George III., wars prevailed to an alarming extent, and extraordinary taxes were levied to obtain money to maintain the army and navy. Among the proposals made to raise further revenue was a tax on coffins, which gave rise to some keen epigrams. Here are a couple of examples. The first is by Mr. Evans, M.P., and dated Derby, July 6, 1791:

“Taxed when we’re born and when we die,
Must coffins now a tax supply?
In vain on earth we respite crave,
Or seek a shelter in the grave!”

Mr. Evans adverts to the old tax by which persons, not being in the receipt of alms, had to pay two shillings on the birth of a child. The nobility and gentry were taxed at a much higher rate, for example, a duke, for his eldest son, had to pay £30. Another epigrammatist addressed the king as follows:

“Taxed to the bone, thy loving subjects see!
But still supposed, when dead from taxes free;
Now to complete, Great George, thy glorious reign,
Excis’d to death, we’re then excise’d again.”