Sans Souci and Other Prussian Palaces

BERLIN has its public gardens, and its popular music and dances, as well as any other German city; but they who do not care to visit these will find pleasure in walking as far as the Kreutzberg, a little eminence, a novelty here, at a little distance from the city, on which is erected a Gothic cross or monument of metal, in memory of those who died in the war; and figures of the chief leaders in it occupy niches, and the names of all the great battles in which the Prussians were engaged, are exhibited on the different sides. Charlottenburg, a few miles from Berlin, is also not only a charming palace in extensive and pleasant gardens, but of great interest from the reposing statue of the amiable Queen Louise, by Rauch, which is in a little temple in the garden.

But Potsdam is the great paradise of this neighbourhood, as we may be allowed to call it, for though nearly twenty English miles distant, a railway conveys you there in forty minutes. Here the scene is indeed changed! Here, instead of sand and monotony, you have hills, water, woods, every thing which is attractive in nature. What a splendid situation were this for a capital! The city on the plain, backed by these beautiful hills, with every possible variety of site for villas and pleasure gardens. What woods and 184 hills, and the beautiful river Havell spreading itself broad and winding, like a succession of fine lakes! Why was not Berlin placed where Potsdam is? Possibly the Havell, broad as it looks, may not be so navigable as the Sprey, and there may lie the secret, or what a capital would it be here!

Frederick the Great, however, duly appreciated the beauty of this neighbourhood. Here he delighted to retire. Steam has now converted Potsdam into a suburb of Berlin, and pours on all holidays its thousands into it, without which Potsdam were a retirement and a solitude still, for grass grows in its streets. But who cares for Potsdam itself, as it lies in its hollow, with its great old palace, and great old public buildings and barracks, and avenues of great trees, except that its old church contains the tomb of Frederick the Great, on which Napoleon heaped the incense of his praise, and from which he stole the old warrior’s sword. But the hills on the Havell, and the views of the Havell from them, the rich meadows, the wild forest scenes — these are what justify Frederick’s fondness for this spot, and who can enough enjoy them? That Frederick enjoyed them, the palaces which he has scattered through them with an extraordinary prodigality, sufficiently testify: the Palace in Potsdam, the Palace of Sans Souci, the Marble Palace, the New Palaces. That the present race enjoy them, various lovely villas, as the Charlottenhof, Grünecke, and others shew. That the last king enjoyed them, the Pfauen-Insel is a charming proof. If any one wishes to find the lost fairy-land, he must steer his course along the Havell, through a wilderness of pine woods, to the Pfauen-Insel, 185 and there he will acknowledge that he has discovered it. Around amid hills shaggy with forests the Havell pours its deep and dark waters like an inland sea. The world is shut out by the bosky shores and deep pine woods of unknown regions, and in the embracing floods lies the most delicious region which a poet’s fancy could conjure up, or which nature and art, in mutual labour, can construct from the ordinary materials of the earth. Shores of softest green, most ravishing lawns, flowers of superbest dyes and in gorgeous masses, trees of stateliest growth and gracefullest beauty of pendant boughs, invite you ever to scenes where you many wander for hours, and every few moments encounter some new surprise. Here feudal towers rise above the flood, with heraldic banners flapping over the battlements; here stately barge and light shallop lie anchored in some lonely creek; here slope sunny uplands under scattered oaks, where the shepherd watches his flock. Here you come upon a noble conservatory, beautiful with the palms and dates and glorious blossoms of tropical regions, and aromatic with their odours. If you would have any illusion to persuade you, beyond the charms of nature and of summer, that you are in a region of enchantment, you have it. You hear the roar of the lion, the cry of the jackal, and the scream of birds unknown in these climates. You imagine that some scene in Tasso or Ariosto is about to be repeated, and find actually wild beasts of all sorts in different dens and cages in various parts of the island. Such were the amusements of a king here, after he had helped to bind the great wild beast of the age on the rocks 186 of St. Helena; and a more enchanting scene for a day’s excursion he could not have left for the pleasure of his subjects.

Amongst the numerous royal palaces we must say a good word for the New Palace, as it is called, although it has been often and much abused. If not in the purest taste, it still possesses a certain grandeur in its enormous extent, and prodigality of colonnades, porticoes, and statues connected with it. It lies low, in the meadow below Potsdam, but has a fine solitude of woods and quaint gardens about it. It is itself a good and cheerful house, and contains many paintings of much merit and beauty. It has also a theatre, in which have recently been represented, before the court, some of the dramatic pieces of Tieck. If this palace were inhabited by the king, with a full and gay court, it would, with the necessary life and bustle about it, produce far from a despicable impression.

Then there is, in the wood near, that little temple containing the second and most beautiful reposing figure of the late Queen by Rauch. We had heard this effigy much praised for its beauty; but the beauty is that of mind and heart. Representatives of far higher physical beauty we have often seen. The somewhat high cheek bones, the shape of the nose, and the general contour indeed of the countenance, depart from the pure ideal of personal beauty, but a still higher beauty distinguishes this charming statue. It is that perfect sweetness of disposition; that spirit baptized in heavenly affection; that wife-like devotion; that high and dauntless, and holy patriotism, dwelling in a meek and 187 lowly nature, which made this excellent queen adored by the people when alive, and which glorify her image here in the cold stone.

Not far from this palace is Charlottenhof, the beautiful little villa in the Herculaneum style built by the present king, when Crown-Prince, for himself. It is fitted up with a simplicity befitting a private gentleman, but with a classical purity of taste which makes all beautiful. But Sans Souci is the great attraction of the neighbourhood. It is a mere villa perched on a hill just above Potsdam, and surrounded by the most lovely views over the meadows and wild woody banks of the Havell. The hill on which it stands is crowned with gardens in successive terraces. As you approach through the fine meadows and beneath a noble avenue of trees, broad flights of steps, ascending from terrace to terrace up to the house, and the lower part of the house half concealed from view by the swell of the hill, give a very singular appearance to the whole. It seems as if the house was surrounded by a piazza, and that those flights of steps ascended to the top, instead of to the bottom of the building. As we ascended these long flights of steps, successive terraces of the garden shewed themselves right and left, with their vines and fig-trees loaded with fruit, and with quantities of golden gourds, each perfectly round, large enough to fill a wheelbarrow, lying about; and flowers, in richest autumnal hues, glowed around. Arrived on the summit, nothing can be conceived more delicious. The fine views over the lovely country; the gardens all below you; the space before the palace full of beds of gayest 188 flowers, and orange trees standing everywhere in blossom, diffusing through the whole air their delicious aroma. Trees of splendid growth added their beauty to the spot; the mill of the sturdy old miller shewing itself amongst them; and from a circular colonnade, on the other side of the house, a brownish, wildish, burnt-up sort of a country, with windmills, and an artificial ruin of a Grecian temple on a woody hill opposite, constructed with better effect than such things generally are, presented a fit landscape for an old painter. 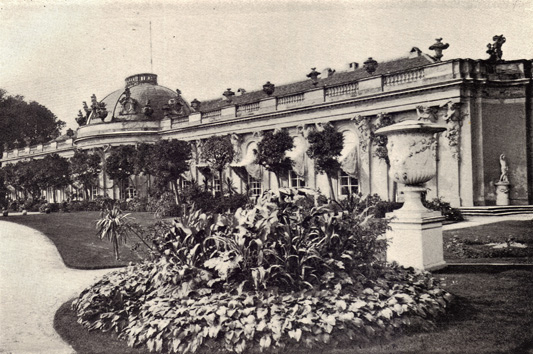 Every part of this place abounds with recollections of the victorious old Fritz. At each end of the garden, in a green plot, are the graves of his horses and dogs, eleven in number, he having ordered himself to be laid there to complete the dozen; an order not complied with. In the house remain many memorials of him; ’mongst them the clock, which stopped exactly as he died, and his library, in which his own works are conspicuous. One volume of his poems stood open at this curious passage:

The wall of the room occupied here by Voltaire is 189 painted all over monkeys and parrots. They tell you that Frederick, being desirous to have a portrait of the ugly old Frenchman, to which he would not consent, the king employed a painter to observe him by stealth from the next room whenever the door was opened, which Voltaire becoming aware of, clapped a screen before his table; and Frederick to mortify him, caused the whole of the walls of his room, the first opportunity, to be thus adorned with monkeys and parrots, as indicative of his person and loquacity. Poor Frederick paid dearly in his lifetime, in annoyance, for his propensity to French philosophy; and his country paid still more so for it after his death.

*  Here’s a rough — unmetrical and dysrhythmic &8212; translation of this poem by Frederick of Prussia is:

But, what are the cries of Cheerfulness!
What Songs! What Acclamations!
The Frenchmen, full drunk on power,
Seem the conqueror of Nations.
This it is; and there it advances
The Pomp of young Louis:
The Englishman has lost his Money Scales,
The Austrian, his insolence,
And the Batavian is now surprised
At groaning under the Clemency
Of this Hero, whose indulgence ——

†  According to mon ami, Bill Thayer, Balave is a typo for Batave (the country of Batavia then, now the Dutch Republic). In a few old history books online, Balave is used, whether this is a mistake or not, I don’t know.