From Tales from the Fjeld, A Series of Popular Tales from the Norse of P. Ch. Asbjörnsen, A New Edition with more than a Hundred Illustrations by Moyr Smith, by Sir George Dasent, D.C.L; New York: G. P. Putnam’s Sons; (no date); pp. 90-94. 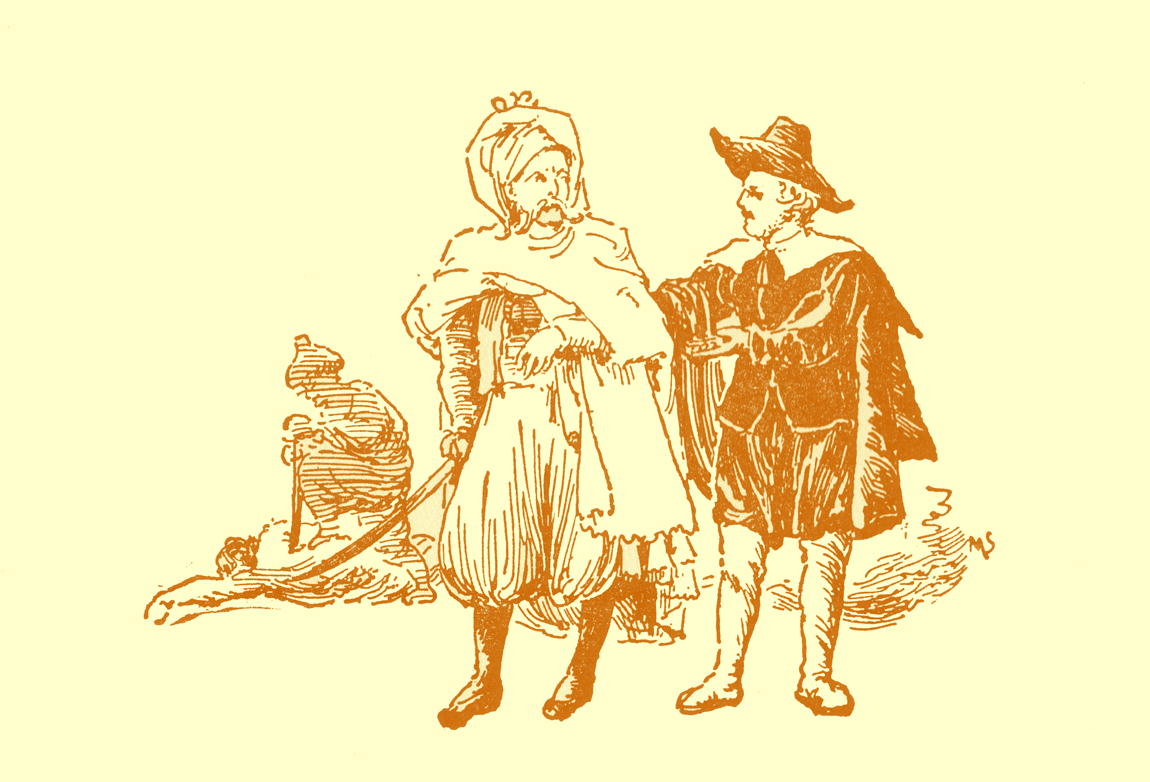 The Shopboy and his Cheese


ONCE on a time there was a shopboy who was so well liked by all who knew him, that they thought him too good to stand behind the counter with a yard measure, and weights and scales. So they made up their minds to send him out with a venture to foreign parts, and they let him choose what he would take out. He chose old cheese, and set off with it to Turkey. There he sold his cheeses very well; but as he was on his way home, he met two who had slain a man, and it was not enough that they had slain him in this life, but they ill-treated his body after he was dead. This the shopboy could not bear to see, how wickedly they behaved; so he bought the body of them, and got a grave with his 91 money, and buried it, and then he had spent all he had.

After a long, long time he got safe home, and was both illcome and welcome. Some of those who had helped and fitted him out thought he had done a good deed; but others were ill-pleased that he should have so thrown away his money. But for all that they were ready to try if he could not do better another time, so they let him choose his lading again. He chose the same freight, and took the same way, and sold his cheese even better than before. But, as he was on his way home, he met two who had stolen a king’s daughter, and they had put harness on her, and had got so far as to drive her; they had stripped off her clothes to the waist, and one went on either side of her and whipped her. The lad’s heart melted at this, for she was a lovely lass. So he asked if they would sell her. Yes, if he would pay down her weight in silver he might have her, and there was no long bargaining: he paid all they asked.

After a long, long time, he got safe home; but those who had fitted him out were one and all so ill-pleased at his dealing, that they banished him the land. So he had to set off to England. There he stayed for four years with his sweetheart, and the way they got their living was by her weaving ribbons, which she wove so well that he sold two shillings’ worth a day.

One day he met two who were foes, and one wished to thrash the other because he owed him eighteenpence. That seemed to the lad wrong, and he paid the debt for him. Another day he met two travellers, who began to talk with him, and asked if he had anything to sell. 92 “Nothing but ribbons,” he said. Well, they would have three shillings’ worth, and asked him where he lived, and fixed a day to come and fetch them; and when the day came, they came too, and lo! when they came, if one of them was not the princess’s brother, and the other an emperor’s son, to whom she was betrothed. So they got the ribbons for which they had bargained, and wanted to take her home with them. But she wouldn’t go unless they would let him go with him, and take care of him; for she would not forsake the man who had freed her, so long as she had breath in her body. So they had to give way to her if they were to take her at all. But when they were to go on board ship, the brother and sister went first into the boat, and when the emperor’s son was to get into her, he shoved her off, and jumped into her himself, and so the lad was left standing on the shore. The ship lay ready for sea, and they sailed as soon as ever they came on board. But then up came the man for whom the lad had paid eighteenpence, in a boat and put him on board. Then the princess was so glad, and took a gold ring off her finger and gave it to him, and made him go down into the cabin where she lay.

Well, they sailed many days, till they came to a desert island, where they landed to look for game, and they settled things so that the brother, and the Norseman who had saved the princess’s life, were to go each on his side of the island, and the emperor’s son in the middle, and when the lad was well gone, so that they could neither see him nor he them, they got on board, and he was left to walk about the island alone. Then he saw there was no help for it but to stay there; and 93 there he stayed seven years. He got his food from a fruit-bearing tree which he found, and when the seven years were up, an old, old man came to him and said —

“To-day your true love is to be married. They have not got a kind word out of her these seven years, since you parted; but for all that the emperor’s son wants to marry her, for that he knows she is wise and witty, and for that she is so rich.”

After that the man asked if he had not a mind to be at the wedding. So he said — well! what he said any one can guess, but he saw no way of getting there. But lo! in a little while there he stood in the palace where the wedding was to be. Then he wanted to know what kind of man that was who had brought him thither. “He was no man,” he said, “but a spirit.” He it was whose body he had bought and buried in Turkey.

After that, he gave him a glass and a bottle, with wine in it, and told him to send some one in with a message to the cook to come out to him.

“When he comes, you must first pour out a glass and drink it yourself; and then another, and give it to the cook; and then you must pour out a third, and send it to the bride; but first of all you must take the ring off your finger, and put it into the glass which you send her.”

So when the cook came in with the glass, they all cried out, “She mustn’t drink.” But the cook said, “First he drank, and then I drank, so she may very safely drink the wine.”

And when she drank the glass out, she saw the 94 ring that lay at the bottom, and ran out, and as soon as she got outside she knew him again, and fell on his neck and kissed him, all shaggy as he was, for you may fancy, he had neither lather nor razor on his beard for seven years.

But now the king came after, and wanted to know 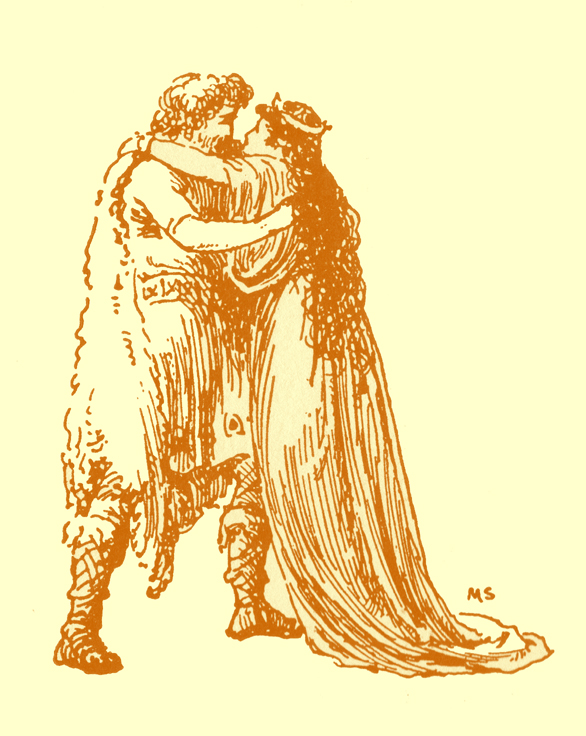 the meaning of all this fondling between them. So they were brought into a room, and told the whole story from first to last. Then the king bade them go and fetch a barber, and scrape the bristles off him, and trim him, and a tailor with a new court dress, and then the king went into the bridal hall, and asked the bridegroom, that emperor’s son, what doom should be passed on one who had robbed a man both of life and honour.

He answered, “Such a scoundrel should be first hanged on a gallows, and then his body should be burnt quick.”

So he was taken at his word, and suffered the doom that he uttered over himself; and the shopboy was wedded to the king’s daughter, and lived both long and luckily.