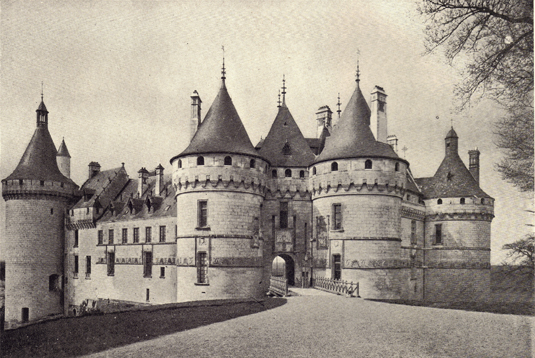 THOSE whose natures are sufficiently artistic to seek that intimate and sympathetic accord that exists between human monuments and their natural surroundings will do well to visit Chaumont on a fine summer’s day under the rays of a scorching sun. Those strong towers built to withstand a siege, and those towers still so white after four centuries, should stand out strongly against the deep blue of a July sky in order to produce their full effect. Then that gleaming mount from which the ancient castle took its name, those great trees that frame it, and that lazy stream sleeping at its feet attain their full value. There is no discordant tone, nor any noise of man or beast, to disturb the majestic unity of this beautiful spectacle.

Seated on the opposite bank, on that embankment of the Loire that goes back to the time of Louis le Débonnaire, at one glance the traveller sees a picture that would enchant a painter, from the Loire that ripples at his feet, the white houses of the little village of Chaumont extending like a boa at the foot of the castle, pressed in as it is between the hill and the river, and the stone stairway which by a hundred and sixty steps ascends the side of the hill that broadens towards its summit to give room for the little church of the bourg as well as for the giant elm planted by 211 Catherine de’Medici, to the castle terrace hanging two hundred feet above the gorge, the carved buttresses of the chapel in which George Amboise dreamed of the papacy, and the vanes of the tower from which the widow of Henry II. questioned the stars. At this noon-day hour when all nature is silent, the sun that turns the sands of the stream into beds of gold, and picks out ruby aigrettes in the rose windows of the chapel, casts the silhouettes of pilasters that support it on the wall of the gallery that terminates the courtyard of the castle, giving an infinite charm to the semi-gloom of that gallery and to the beneficently shaded steps that must be mounted to arrive there.

Those who love to arrange effects and not include an entire monument in a single glance but allow it time to some extent to present itself to the view and successively reveal the various features of its physiognomy, will do well to avoid the rude stone stairway cut in the rock and rather take the verdurous avenue that leaves the road and leads by a lessened though still steep slope to the platform on which the castle stands. By this means, they will see it rise progressively through the openings of a clump of ancient elms called the Queen’s Mall.

Approached on this side, Chaumont presents itself at an angle and spreads out in the form of a fan. At the extremity of each of the two ribs of this fan rises a great tower, and the bottom of the fan which is cant-shaped is guarded by two somewhat smaller towers between which is the main entrance.

From this disposition, it results that from the angle occupied 212 by this gateway the visitor may include the four towers of the castle in one field of vision: to the left is the Amboise tower, which is the highest and the best preserved; to the right is that of Catherine de’Medici, with its battlements still imprinted with cabalistic signs; and in front are the two towers of the gateway. On these towers and on the walls that connect them, about one-third of the way up, is a belt of carving alternately framing a mountain with flames issuing from its top and two C’s back to back,

The outer moat, at the present day largely filled up and replaced by a flowery sward, somewhat relieves the heavy character of the drawbridge that defends the entrance to the castle. We must halt upon this drawbridge to examine the details of the thick oaken door, on which are carved the Twelve Apostles, and the stone medallion that decorates the archway. This medallion, which has recently been restored, offers a remarkable exception to the rule generally followed in the Fourteenth and Fifteenth Century, when it was customary to carve above the principal gateway the arms of the family to whom the castle belonged, and sometimes the statue of its founder. Here, framed by delicate ornamentation, we see the initials of Louis XII. and Anne of Brittany, his second wife: the L on a ground sewn with fleurs de lis and the A among the arms of Brittany. On a level with this medallion, arms are incrusted on the towers guarding the gateway: on that on the right are the arms of Georges d’Amboise surmounted by a cardinal’s hat; on 213 the tower on the left are those of his nephew, Charles of Chaumont, Admiral and Grand Master of France. It is doubtless the latter to whom all these sculptures should be attributed. It is presumable that on his return from Nantes, where he had just espoused the widow of Charles VIII., Louis XII. stopped at Chaumont in company with his new wife and his minister, and that the Maréchale de Chaumont, to do honour to his uncle and the royal pair, had this medallion and these arms carved on the gateway and towers, and therefore they date from the year 1499.

We pass the drawbridge and the gate, leaving on our left a painted gallery full of luminous shadow, and find ourselves in a vast quadrilateral court of honour surrounded on three sides by bodies of buildings and having the fourth open on immensity. Like the others, this fourth side was once enclosed by buildings and flanked by two towers commanding the Loire. These constructions were razed four hundred years ago by a counsellor of the Parliament of Paris, named Bertin de Vaugien, who at that time was the owner of the Castle. This man did an intelligent thing in this, but probably without suspecting it: by chance it happened that vandalism had good taste for once.

Leaning on the iron railing that has taken the place of the fourth body of buildings, the visitor gazes over an immense horizon line and a landscape “made for the delight of the eyes.” In the foreground are terraces thick with flowers; a little lower down, through the stunted trees that have thrust themselves through the clefts in the rock, peep the sharp and symmetrical roofs of the little village of 214 Chaumont; behind this village is the Loire; behind the Loire stands the hamlet of Escures; farther away is the railroad, the black and wearisome lines of which lengthen out on their gravel bed; in the background appear the church of the large town of Onzain and the ruins of the old castle in which Voltaire wrote La Pucelle. There is no monument, however fairy-like it might be imagined, that would not be crushed by such a frame. Therefore Chaumont suffers by being viewed close at hand, from the height of this magic balcony whence the work of divinity reveals itself with a splendour that effaces the finest conception of man.

The great hall that comes after the ante-room contains nothing remarkable but a long chest of carved wood set against the wall, and a niche around which are reproduced the names or arms of all the lords of Chaumont from Eudes I., Count of Blois, who lived at the close of the Tenth Century and who consequently had no arms, to Vincent Walsh, whose arms are three lance-heads.

A curtain over a door is raised and we are in the bedchamber of Catherine de’Medici. Here the work of restoration is happy and sufficiently complete. Here is the bed of the ambitious Florentine, a bed with torso columns the carved top of which supports a royal crown. On one side is the Queen’s prie-dieu with her Hours open; on the other is her toilette-table with her opiate boxes; the whole is framed in tapestries of high gloss which give to this chamber the sombre and somewhat sinister character that befits it. These curious tapestries were certainly made for 215 Chaumont, since we see the Castle reproduced in one of their panels. We suppose that they date back to Charles d’Amboise who rebuilt Chaumont towards the end of the reign of Louis XI., or at least to his son, Marshal Chaumont, the friend and companion of Louis XII.

Catherine was in possession of Chaumont for nine years, from 1550 to 1559, that is to say, during almost the entire reign of her husband. This was the difficult and humiliating period of her life; that of her struggle with the Constable Montmorency and Diana of Poictiers. The curious bahut that is admired in this chamber must have had many state secrets concealed in its innumerable drawers, including many plots, baffled or prepared, and many formidable projects. This chamber, in which Catherine nursed her troubles as a queen and an outraged woman, possessed one great advantage for her. She had at hand her two guides, her two customary consolations, — Astrology and Religion. By that door she could penetrate into the tower where she cast horoscopes in company with Ruggieri; by the other one she could enter directly into the chapel.

This pretty chapel forms a striking contrast with its neighbouring tower. Just in proportion as the chamber in the tower is deaf, cold and dumb, and admits a sinister light by its single window, pierced in a wall of more than three metres’ thickness, to the same degree is the chapel elegant, coquettish and smiling. Windows of bold contours pour a flood of rosy light upon the choir, tiled with white faïence sewn with blue crosses, producing a charming effect. Pretty bas-reliefs in oak upon a gold background form the 216 base of the altar. A tall and fine oak chair, carved and emblazoned, which is said to have belonged to Georges d’Amboise, stands beside the sanctuary. A red cardinal’s hat, attached to the vault, hangs above this arm-chair.

This chapel terminates the edifice most happily. The apartments that precede it have seen many masters pass through; they recall many perfidies, struggles, and illustrious and unfortunate existences. After all this tumult of glorious or withered memories, our mind, like our eyes, finds grateful repose in the smiling and calm sanctuary. It reaches God by an insensible and natural law of contrast as the sole master who has not changed in this abode, the sole guest who has never left behind him anything but good memories and consolation.

The Castle of Chaumont, as it has come down to us, is a building of the Fifteenth Century. It was erected by Charles Amboise on the ruins of a more ancient fortress razed by order of Louis XI. and which itself had been built about 1159 on the remains of as strong castle destroyed by Thibault V., Count of Blois and Champagne. The first and most ancient of these constructions had been built about 908 by Eudes I., Count of Blois, the eldest son of the celebrated Thibault the Trickster.

*  Thanks to the kindness of my bon ami, Bernard Blumberg, of www.Bucovine.com, here is the page with his beautiful picture of the Château of Chaumont-sur-Loire.