The Treasury of Wit

Welcome to the Good, the Bad and the Funny!

The Treasury of Wit is a rare collection of witty sayings, puns, and jests that was published in 1836, in Britain. It was printed in London for T. Allman. The editor is nameless. Another book published for T. Allman was printed LATER in 1840 and called Jester: Treasury of Wit. I don’t know if this is a reprint or a new edition. It, too, is scarce as hen’s teeth. There are only a couple of copies of the later volume in two or three libraries, but I cannot find any of this edition there. There are no other copies for sale, of either one, today (April 2014), or when I bought this one (2012). Therefore you are privileged (you lucky dog, you) to read the only online text of this book at present.

Here’s the scoop on T. Allman. He was a publisher, part of a family run concern spanning at least three generations. The fullest account I found is from The Literary Year-book and Bookman’s Directory, Edited by Herbert Morrah, London: George Allen, 1900; pp.  349-350.

“ALLMAN & SON, LIMITED, 67 NEW OXFORD STREET, W.C.  This firm was founded by Thomas Allman towards the close of the eighteenth century in Prince’s Street, Hanover Square, the founder being succeeded after some vicissitudes, by his son Thomas, who eventually took his brother Joseph into partnership. Messrs. Allman were ‘publishers to Queen Caroline,’ and issued Her Majesty’s Defence. On the retirement of his younger brother Joseph, Thomas Allman removed (in 1828) to Little Queen Street, later removals being made to Holborn Hill and to the present address. The business was carried on from father to son under the old style until 1888, when it became a Limited Liability Company, of which at the present time Mr. Albert Freeman Allman is the Chairman and Managing Director. The firm has long been identified with educational publications. Among their works are included Jacob Abbot’s works, Huntingdon’s works, Ahn’s series of foreign languages, Murray’s Grammar, and numerous other books of educational value.”

One of the bragging points by the editor is the inclusion of “Comic Engravings.” There are twelve in the book. The artist is anonymous. All that is stated about that person is in one sentence, in the preface, stating:

“On the merits of the etchings which accompany this Work, it is quite unnecessary to dwell; they have been executed by one of the first artists of the day.”

A few of the jokes and choice bits of wisdom are centuries old. Many of the ones here are in other later collections. However, this book contains a whole lot of stuff that I have not read before. That’s saying something, since I have several other complete joke books on line on Elfinspell, spanning many eons, as well as having more pending.

I was particularly pleased to find some “new” old anecdotes about some of my favorite people: The Earl of Rochester and Lord Chesterfield especially. There are lots of anecdotes about past leading lights, kings, generals, archbishops and such, but most of the people who star in the jests are the notables of the 18th and early 19th centuries.

Jest Books, or Joke Books, have additional benefits. They are the by-roads to braininess. They lead you through the backdoors of history, where you can read the fine print of a period: the trifles, trivia and assorted minutiae of social life and thought. While they amuse, they also accidentally leave you with an intimate glimpse and working knowledge of the period when it was written. Obviously, this was not the intent of the writers and publishers of the original books. Nevertheless, these comic compendiums are one of the best, near painless paths to learning!

On a slightly larger scale, you will know the people (individually or as a class), and the beliefs or practices of an era, that were considered worthy of quoting, praising, or mocking by the Wits of that day. You also discover who those Wits were.

Besides the funny matter, in The Treasury of Wit you will buff up your knowledge of day to day living, eating, loving, stealing and laughing, as well as the vocabulary, including the slang (called cant then) and peculiarities of punctuation, of the Georgian and late Regency era (also called the pre-Victorian period). The etchings add visual details on top of that.

Only one or two of these jokes are mildly risqué, but the few that are are subtle but surprisingly bold. A very few are politically incorrect, by our standards, which is a relief. Many American humor books of the time are much meaner and more bigoted. There are anti-Scotch overtones here, which I gather from A Blue-Nosed Pair of the most Cerulean Hue, by my pal, Freddy Cozzens, might be deserved at that time, and the Irish as makers of “Bulls” are tenderly and tolerantly quoted. There are a few American jokes and some old stories in modern dress, without attribution. If I know the source, I tell you on that page. I have added other footnotes and links as well, as appropriate, and if I felt like it, after proofreading and scanning pictures.

A little about the online text. The body of the book is divided into 6 sections: fifty pages per section, for ease of loading. There were plenty of typos to be found in this book. The emends are noted in the source code. There were a plethora of orthographical oddities, too, but they were so inconsistently done that I am unable to decide if this was due to bad punctuation or to kerning (the spacing adjustments of the words on a line of a page to meet the margins when justifying the text block). It was a standard practice to separate some contractions in the 18th and 19th centuries, both in the UK and in the USA. Examples being before (’ll, and ’re — you ’ll, and they ’re. It was common to see contractions formed by adding n’t separated as well: do n’t. instead of today’s don’t. There are several more examples, but now you understand the pattern. In this text, for the use of some contractions, the spacing was inserted before the apostrophe and sometimes it was not, for the very same word, for no apparent reason, as I said. Since doing so just as sporadically as in the text would make the online text look as badly proofed as the original, but cast aspersions on my version unfairly, instead of the original, I have made the punctuation uniform throughout. For an example of a book where this usage was done consistently, and so preserved in the online text of it, see the excellent novel by the “Rising Author of the New South”: Queed, by Henry Sydnor Harrison, on this site. (N. B. There are many places on this site where it is fair to cast aspersions on my proofreading abilities, if that is your desire. Though if you tell me about them, I ’ll fix them and credit you and your eagle eyes!)

Other than the emends and some clearly separated footnotes at the bottom of the page, I have an old photograph or two (obviously not from the period in which the book was written but within 75 years or so), to allow you to picture the scenes of the jokes a little more clearly. Otherwise the text is as it was printed. No jokes added or taken away, or rewritten.

I cannot completely decipher the name of one of the previous owners of the book I have. It appears to say “J. Entenburg, Easter Monday, 1951, but he hath had it longer.” Maybe you can do better. Here is the original inscription on the first front-paper." 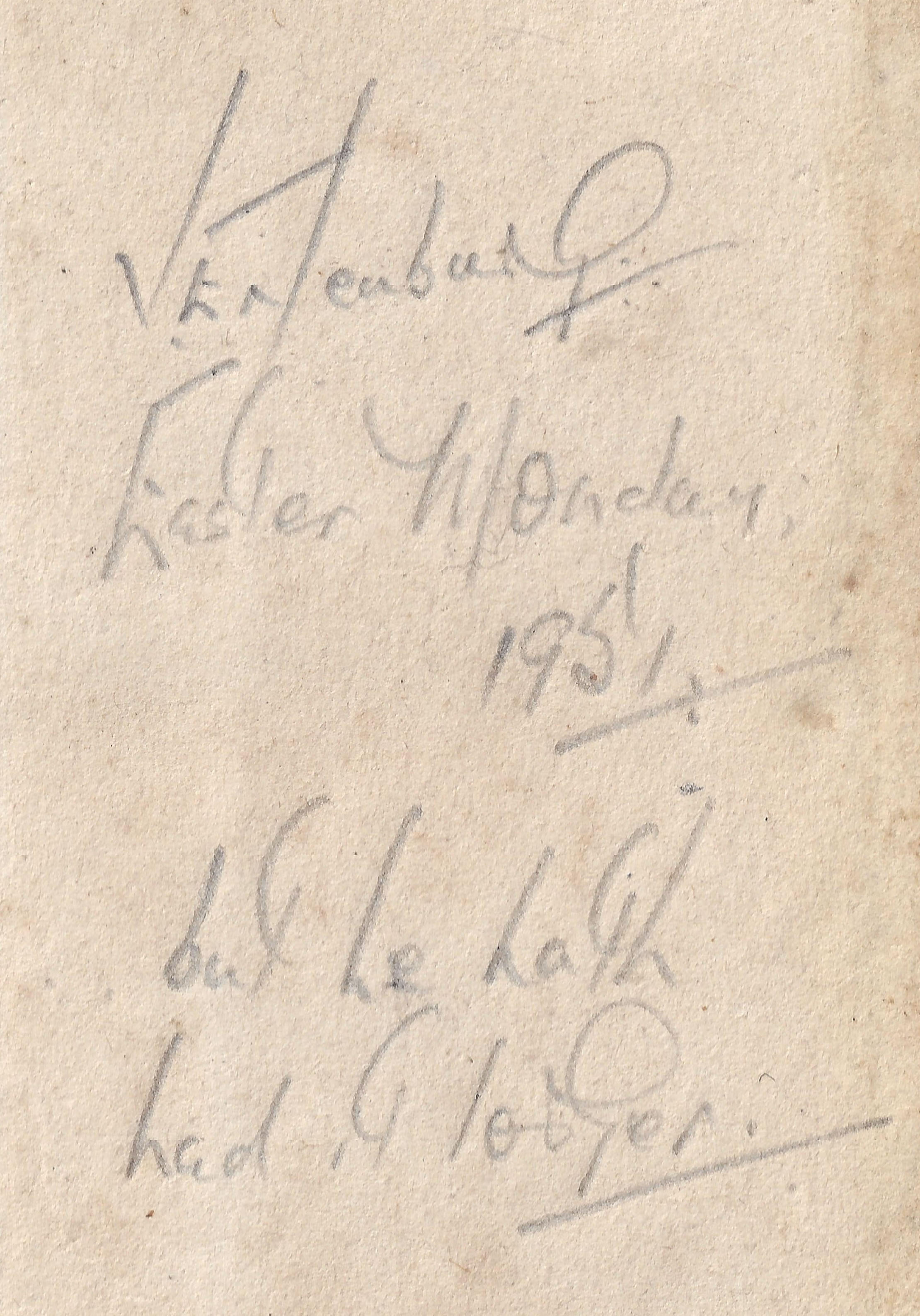 I will put some of my favorite selections on the New Stuff page, the semi-blog for this site but I don’t want to deprive you of the joy of mining for the gold in the book. There is a fair amount of dross, and some mica, in it; but if you don’t find something that tickles your funny-bone then you are a hardened character indeed. That would not be you, I know, or you wouldn’t be on this site in the first place!

Now get cracking, and crack up!

The Treasury of Wit.